Why have wireless controls disappeared from my GNOME topbar?

Right now, it doesn't. I've only got a generic networking icon, the same as for wired networking. There is no networking item in the menu at all. (I would have to open GNOME Settings, and then open the wireless settings page).

EDIT: this has happened several times, but other times I do have a wireless networking icon etc. So I guess this is a bug.

EDIT: It seems like logging out and back in again fixes it.

Perhaps it is associated with this message in the system log:

The strange thing is, if I connect to a wired network, I actually get a menu item for wired networking. As before, this has a sub-option which allows editing wired settings. But apparently I'm not allowed to have this for wireless networking...

Is this is a deliberate change? If so, is the remaining UI for wired networking an oversight, or is there a deliberate difference? If this is not deliberate, does anyone know why this happens? I.e. if it's a bug, does it affect everyone using wireless networking, or are there additional conditions needed to reproduce the bug? 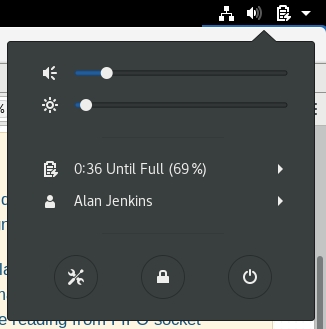 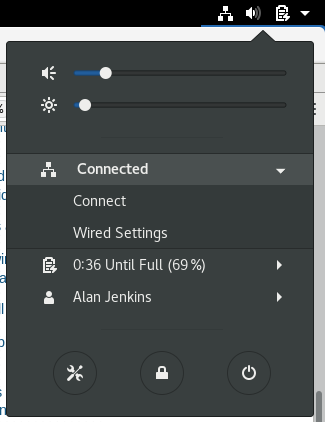 Other users are affected by the same symptoms, and see the same error message. At least in one other case it is agreed that this does not happen all the time. It must be a bug, and not a deliberate change.

Not the answer you're looking for? Browse other questions tagged wifi gnome gnome-shell or ask your own question.

9
Is locking the screen safe?
6
Wireless networking with CentOS
15
Why does F10 in gnome-terminal open the right-click menu?
4
Using startx on Fedora 17, a non-root user cannot join new wireless networks — how to fix?
8
Wireless bridged networking in KVM. Why is it so complicated?
0
How to connect to wifi on a Gnome 2.24.1 system?
1
Enable access to WLAN
6
Gnome-shell cannot adjust screen brightness on dell laptop with intel graphics
0
Wireless issues in Fedora 25