Does the master device appear just like a standard terminal to the driver program?

From the Linux Programming Interface

Does the master device appear just like a standard terminal to the driver program? If yes, like a controlling terminal? If no, something like a device file or regular file but not necessarily a terminal's device file? 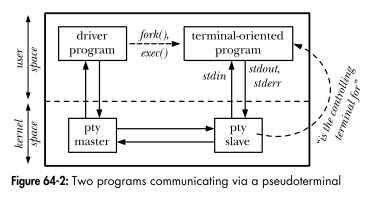 The master device looks like a terminal device file, complete with a line discipline that is accessible via tcgetattr()/tcsetattr()/&c. and a success result from isatty(). In fact it is the same line discipline instance as the slave device, and this is how the program on the master side transmits things such as window size changes to the programs on the slave side. It is also how the master-side program signals (an emulated) modem hangup, by setting the line speed to zero and thereby triggering the line discipline's hangup mechanism. (What the text says about line speed is thus incorrect. There is a case where line speed is meaningful.)

The difference lies in read/write I/O. What is read is the sequence of characters that would, for a real terminal, be sent over an actual underlying serial device. What is written is the sequence of characters that, for a real terminal, be received by that actual underlying serial device. In other words: it is the other side of canonical/non-canonical input and output processing by the line discipline.

There are complexities to this, namely packet mode and remote mode. The latter has fallen into desuetude long since, and did not exist in most operating systems even at the start of this century, necessitating patches to Daniel J. Bernstein's old pty tools. The former is not really particularly useful for most tasks, and thus I am not going to cover it in detail in this answer.

This will be the case for programs such as script, NeoVIM's :terminal, emacs, and ptybandage (if not part of a pipeline), which are directly rendering to another terminal device and run within an interactive session controlled by that terminal device.

Note that the diagram is not definitive. It is not necessarily the case that the master-side process forks the slave-side processes. In nosh-toolset user-space virtual terminals, for example, the slave-side processes are ordinary ttylogin@* services, forked by the service manager, and there is no direct process relationship between the emulator process on the master side and the login session processes on the slave side. But that is going beyond the scope of this answer.

The master device looks mostly like a pipe. You can read and write its file descriptor like a pipe, in sizes that are convenient for you. You will get short reads, so always check what read(2) returns.

Not the answer you're looking for? Browse other questions tagged pty or ask your own question.

81
What are the responsibilities of each Pseudo-Terminal (PTY) component (software, master side, slave side)?
29
How can we know who's at the other end of a pseudo-terminal device?
6
Bash shell launched by forkpty() spawns child processes that ignore SIGINT. Why and how do I ensure SIGINT is not ignored?
10
Why doesn't sshd use a pseudo terminal when the ssh client's argument is followed by an interactive program?
2
Does a virtual terminal have a master end?
6
Does the process on the slave side of a pty talks to the line discipline or to the slave tty driver?
2
Do the output of command `tty` and the file `/dev/tty` both refer to the controlling terminal of the current bash process?
2
Perplexity about TTY and PTY