ffcast and compton - a shadowy problem

So I have compton, a composite manager that I use to make things look prettier, mostly to add shadows to windows, and make things transparent.

I also have ffcast, which I currently am using to make gifs or mp4s by selecting a part of my screen and recording it.

The two don't seem to mix well however, as if I start recording with compton being enabled... 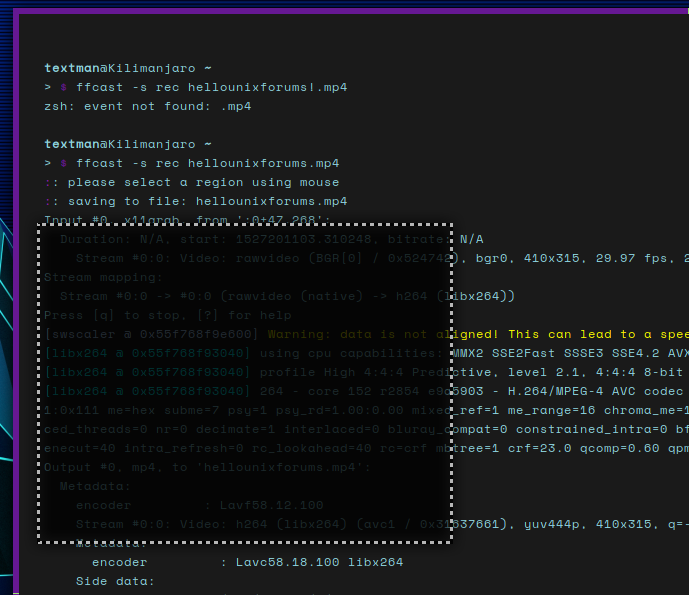 This happens! The entire region is covered by a shadow! I'm sure this is caused by compton, but I have some problems. Firstly, I'm not too sure how the shadow-exclude option works in compton, apart that if you add something like:

...it will avoid displaying shadows on all applications which have the WM_CLASS 'something'.

I can find the WM_CLASS of any window using xprop WM_CLASS however which should make things easier, however, this does not work with the shadowy region as it just selects whatever it is covering.

So I am at a loss. I'm not sure whether this is a bug that's possible to fix or what, but I cannot find a way to remove this shadow apart from turning off compton completely or removing shadows entirely, which I do not want to do. Is there a special option for shadow-exclude that I am missing, or something else that I could do, or is this impossible to fix?

Thank you very much in advance.

PS. Here's my compton.conf file before I forget:

ffmpeg shadow compton
Share
Improve this question
asked May 24 '18 at 22:37

Adding "window_type *= 'normal' && ! name ~= ''" to the list of shadow-exclude fixed the problem right up! I'm pretty sure this is because the area has no WM_CLASS, and as such is now excluded from having a shadow.

Not the answer you're looking for? Browse other questions tagged ffmpeg shadow compton or ask your own question.

0
VLC always transparent when using Compton
5
Exclude windows with no static id from Compton
7
Linux, compton, have only one specific window transparent
0
Using compton with Pywal causes background to be gray
0
How to apply strict pattern matching for title names in compton config file?