How to unload kernel module 'nvidia-drm'?

I'm trying to install the most up-to-date NVIDIA driver in Debian Stretch. I've downloaded NVIDIA-Linux-x86_64-390.48.run from here, but when I try to do

as suggested, an error message appears.

When I try to find out who is using nvidia-drm (or nvidia_drm), I see nothing.

And when I try to remove it, it says it's being used.

I have rebooted and started in text-only mode (by pressing Ctrl+Alt+F2 before giving username/password), but I got the same error.

Besides it, how do I "know that my kernel supports module unloading"?

I'm getting a few warnings on boot up related to nvidia, no idea if they're related, though:

I imagine you want to stop the display manager which is what I'd suspect would be using the Nvidia drivers.

After change to a text console (pressing Ctrl+Alt+F2) and logging in as root, use the following command to disable the graphical target, which is what keeps the display manager running:

At this point, I'd expect you'd be able to unload the Nvidia drivers using modprobe -r (or rmmod directly):

Once you've managed to replace/upgrade it and you're ready to start the graphical environment again, you can use this command:

2) Switch to tty3 by pressing Ctl+Alt+F3

3b) Note that nvidia-drm is currently in use.

4d) Note that nvidia-drm is not in use anymore.

5) Go to your download folder and run the cuda installation.

6) Answer any prompts during installation.

7) When installation has finished, confirm that the CUDA Version has been updated.

lsof lists any files that are in use by userspace processes. But nvidia_drm is a kernel module, so lsof won't necessarily see whether or not it is actually in use. (The module file won't be open because the kernel has already completely loaded it into RAM. But the module might be providing services to the userspace or other kernel components, and that is what prevents the unloading of the module.)

Run lsmod | grep nvidia.drm and see the numbers to the right of the nvidia_drm module name. The first number is simply the size of the module; the second is the use count. In order to successfully remove the module, the use count must be 0 first.

If the X11 server is running and using the nvidia driver, then the nvidia_drm kernel module will most assuredly be in use. So you'll need, at the very least, switch into text console and shutdown the X11 server. Usually this can be done by stopping whichever X Display Manager service you're using (depends on which desktop environment you're using).

As the error message said, if you are running nvidia-persistenced, you'll need to stop that too before you can unload the nvidia_drm module.

I had a similar problem.

*Reason: nvidia.drm package was in use

I fixed it by purging all NVIDIA packages.

Remove all previous NVIDIA installations with these 2 commands:

Module should be removed.

Reboot and go forth.

I solved this problem by disabling the GUI, rebooting, logging in and installing the driver, enabling GUI, and reboot.

Please make sure you know your username and password!!!

Open a terminal and write

Now login and you'll get to a terminal directly, install the driver Do note that I am installing here the 440.44 so you need to modify for your driver version.

After installing the driver enable the GUI and Reboot:

You should be done

You report in comments that stopping the systemd-logind service takes you back to the graphic login. If you have a graphical login then X is running, so the video driver is loaded and in use. This very likely explains in part why the nvidia-drm module is in use.

Additionally, you betray an apparent misconception when you say

I have rebooted and started in text-only mode (by pressing Ctrl+Alt+F2 before giving username/password), but I got the same error.

Pressing Ctrl+Alt+F2 switches to a virtual terminal #2, which may well be configured for text-mode login, but that's a far cry from "starting in text mode". If you had a graphical login screen on the default virtual terminal then X is running, and switching to a different VT doesn't change that. You're just logging in to a non-X session.

The first and easiest thing to try is to actually shut down the X server. The old-school way to do this would be to log in to your text-mode session and execute the command

to switch to runlevel 3. That should work with systemd, too, but the native systemd way would be to instead run

Both of those require privilege, of course, so you'll need to use sudo or make yourself root.

If that doesn't remove the module, or at least make it possible for you to do so manually, then your next best bet would be to boot the system directly into runlevel 3 (multi-user target), or maybe even into runlevel 1 (rescue target). I usually do this by adding "3" (or "1") to the end of the kernel argument list at boot time via the bootloader. You can also change the default boot target as described in this article.

Do also note that the nVidia driver is available in pre-built packages for most Linux distros. Few include those packages in their own standard repos because the driver is, after all, proprietary, but you can surely find a reputable 3rd-party repo that has it. I strongly recommend using such packages instead of running the installer directly, but to get there from where you are now, you may need to first manually uninstall the driver.

Stopping systemd-logind fixed it for me:

This is suggested as a workaround in this github issue on the nvidia-xrun github page:

Good news guys, systemd-logind is the culprit here. The current workaround is to run the following command after logging out from the "nvidia-xrun" session sudo systemctl stop systemd-logind

Then, you'll have manually remove the other nvidia modules and switch off the DGPU manually. Here's the code snippet that runs after you log out from the "nvidia-xrun" session.

Had the same problem with Debian Stretch when trying to install the Nvidia drivers. When in text mod my only solution was to remove the driver, reinstall gdm and gnome-shell. I know it's a clumsy solution, but I remember I first tried fixing the gnome-shell and only removing Nvidia driver and reinstalling GDM. Turned out it was much easier to just reinstall the whole shell.

I also encountered the same problem. The reason for the error was that I accidentally selected "Install nvidia driver" during the installation of cuda.

So, during the installation of CUDA, when you encounter the following options:

Please select q , the problem will be solved.

The accepted answer by filbranden got me in the right direction, but did not quite work for me (it seems that at least the nouveau driver was always loaded and causing problems).

What did work for me, however (as shown here in more detail), was to temporary boot to console mode (text mode). This seemed to make sure that no nvidia or nouveau driver was loaded.

I then followed @filbrandens answer for stopping/removing nvidia-drm and then I installed the nvidia driver from there and rebooted the system. The latter may have been not necessary but since it worked I listed it here.

Additional answer for the one who are facing this problem.

For me, I have to switch the driver to be not Nvidia on software&update, then, reboot and perform installation again. 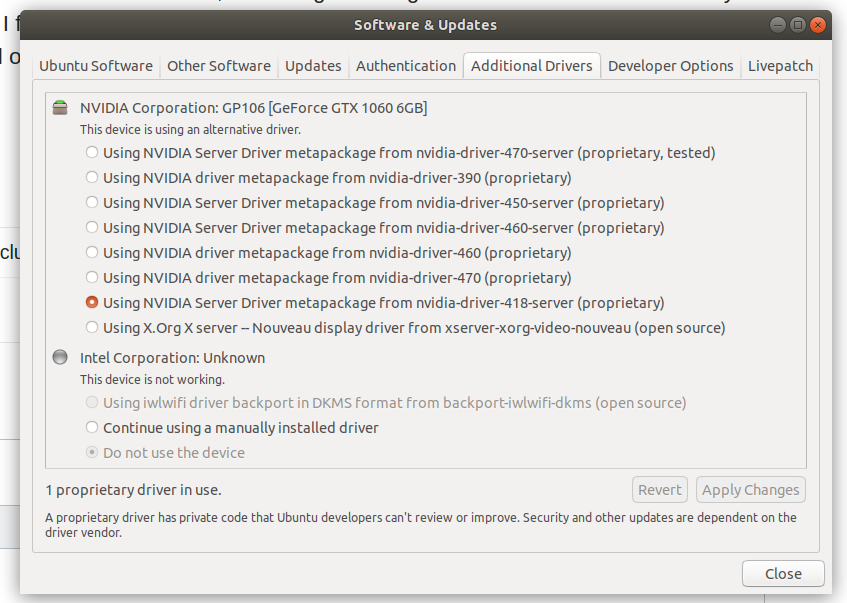 I was getting this error during boot:

during run of the NVIDIA Builder/Installer/Configurator

It told me to use the software Updater App (additional Drivers). But this did not work because there was not other options to change the Driver

If you are a new install you could get errors with: gcc, make, pkg-config, & libglvnd

If you are installing a new driver downloaded manually e.g. before running this with sh...

1st as per other answers...

turn graphics back on???

possibly do a reboot to check on boot everything is now ok.

Pic of my previous state: NVIDIA 470 needed updating to 510 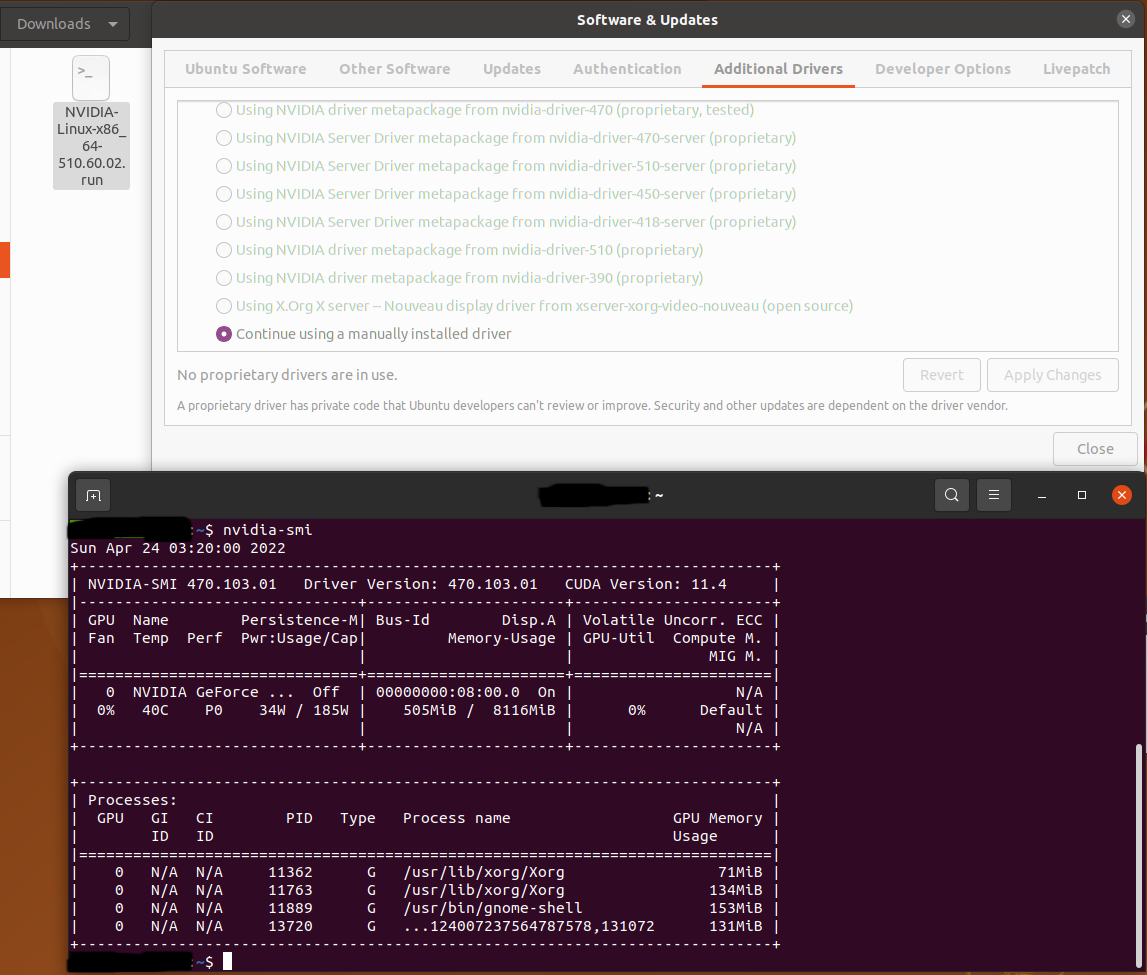 Final Outcome: Wish it was cleaner: 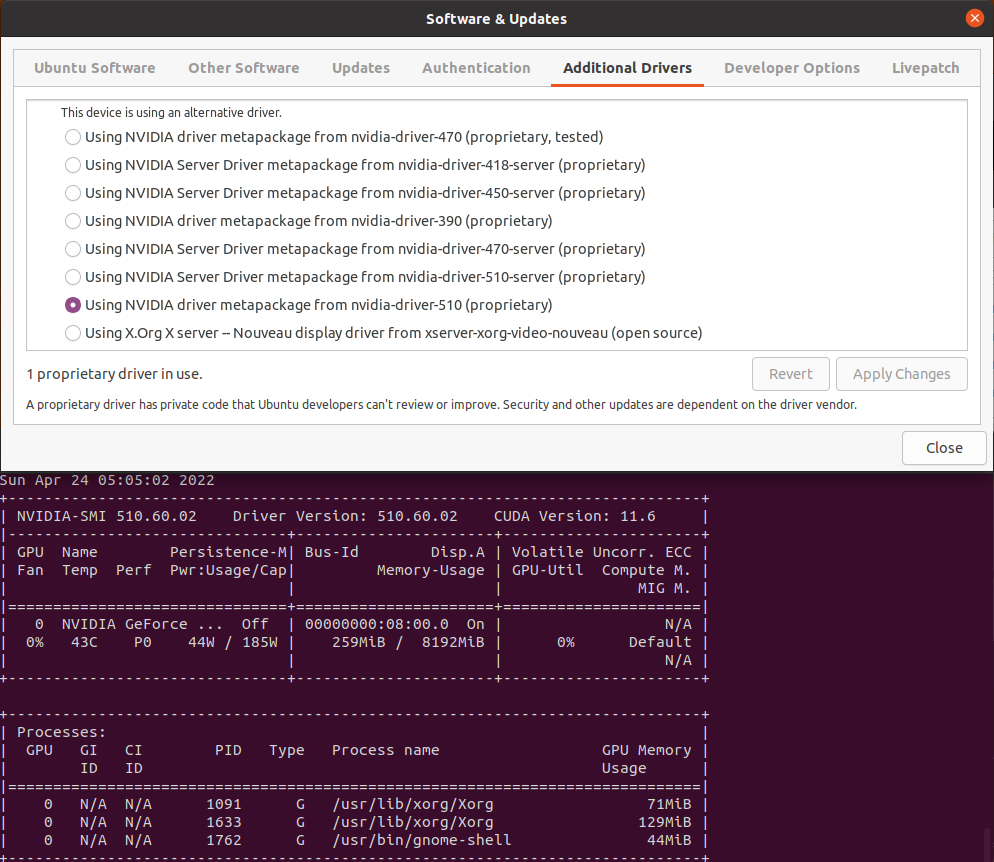 Not the answer you're looking for? Browse other questions tagged debian kernel systemd nvidia kernel-modules or ask your own question.

1
How to unload kernel module 'nvidia-Modeset'
2
How do I know if my kernel supports module unloading?
1
Lenovo Ideapad 330-15ICH overheats in Kubuntu 18.04 only
1
How might we configure X (and other settings) to boot to a graphical CentOS 7 terminal with Nvidia driver using 4k @ 60hz