How can I set my default shell to start up tmux

I would like my default bash shell to go straight into tmux instead of my always having to type tmux every time.

@StarNamer's answer is generally accurate, though I typically include the following tests to make sure that

So, I would add this to the .bashrc:

Start tmux on every shell login, from Arch wiki, seems to work. Simply add the following line of bash code to your .bashrc before your aliases; the code for other shells is very similar:

in your bashrc file will probably do the job. Note this line will exit ssh and terminate the connection once you detach or exit tmux. I like this configuration as it saves key strokes to terminate the connection. But if you don't love this(which I think is very unlikely) and would rather remain in the login shell after termination, just remove the exit part:

Also note you shouldn't wrap tmux attach with exec, as this would cause the connection to be closed when there are no tmux sessions to attach to.

in my .zshrc. If you're using bash, put it in your .bashrc instead.

I also just tried setting tmux as my default shell (chsh -s $(which tmux)) and it seems to break direct command execution via SSH, e.g. ssh $some_server echo foo will not produce any output. 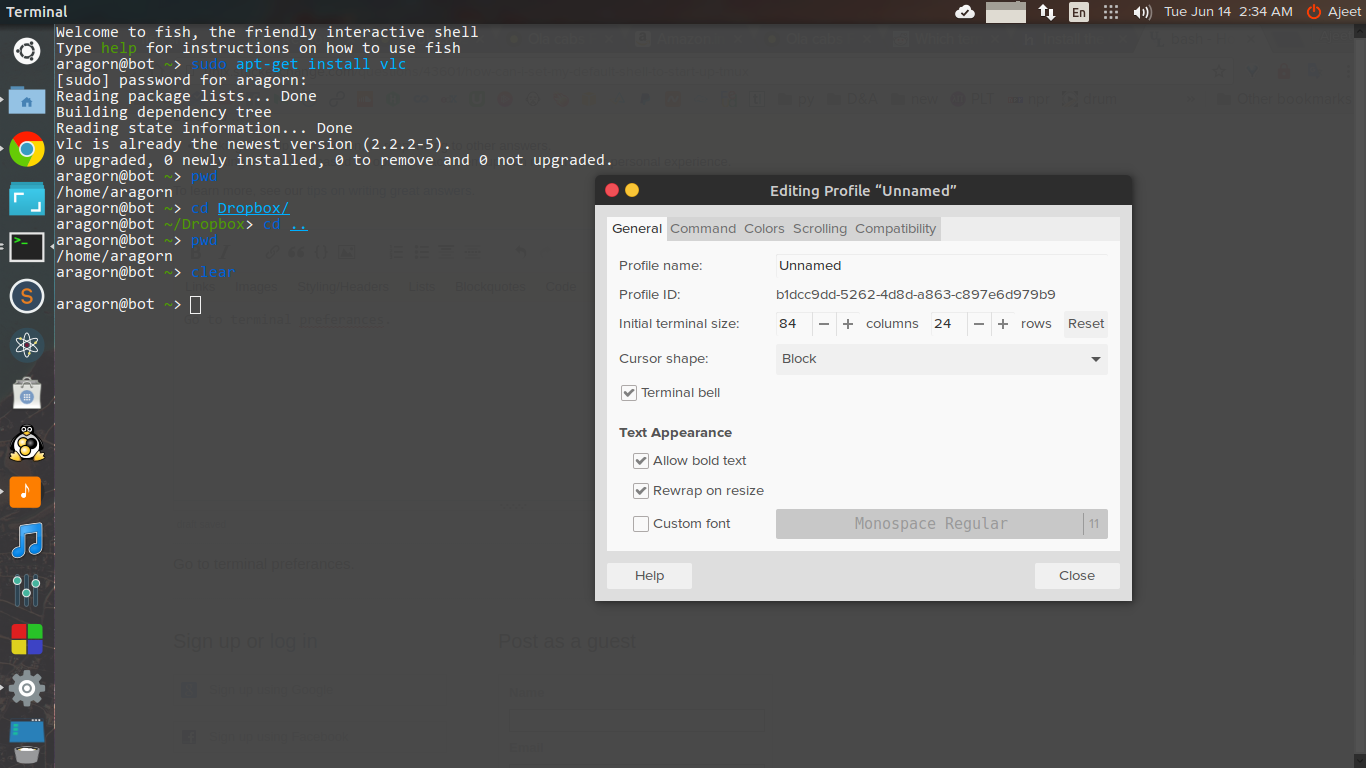 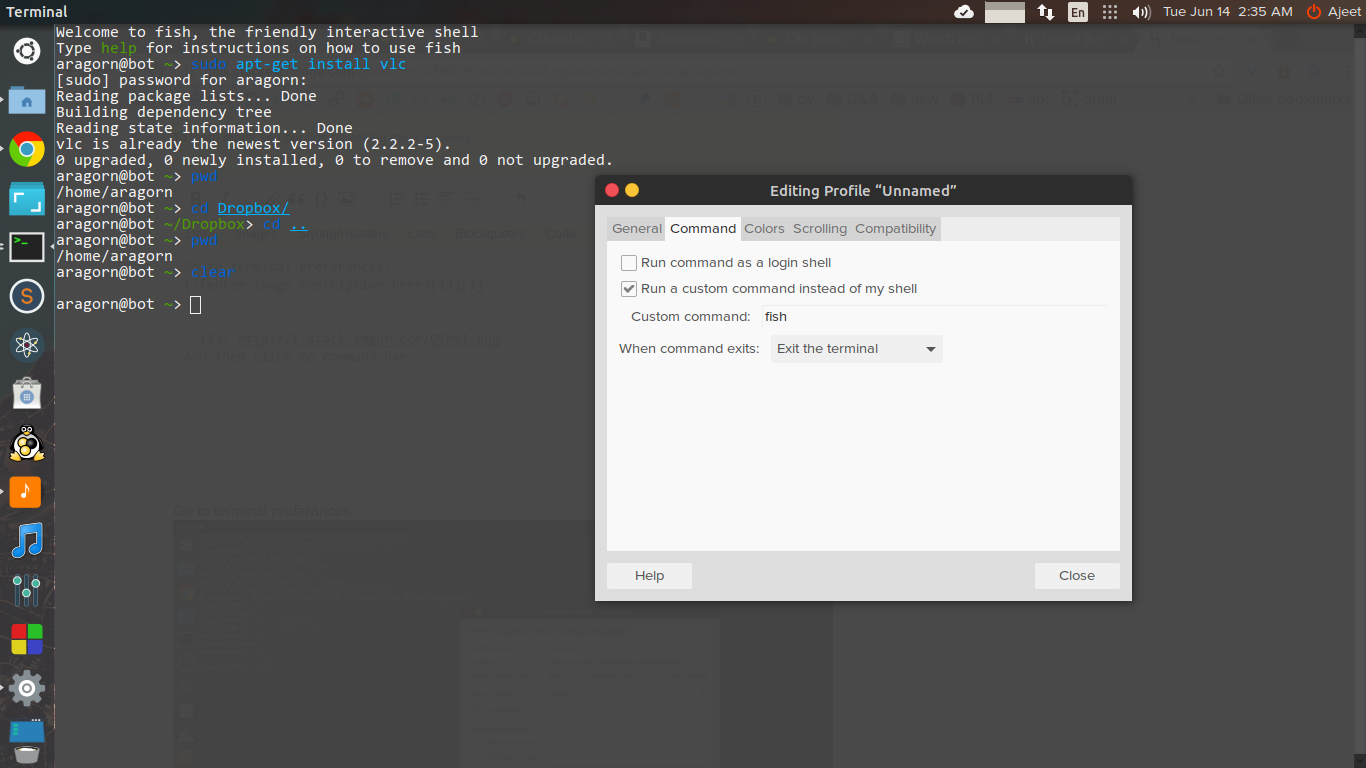 Check the "Run a custom command instead of my sell" and write whatever command you want to execute at the startup of your terminal.

I combined the extensive checks, with the conditional session checking, and put my own spin on it, to create a default session that is connected to or else created. Unless you are inside of another tmux session, or other protective conditions are met.

Based on these answers:

Make tmux your login shell, but don't forget to configure the default-shell setting for tmux first!

You need to test this first, before setting tmux as your login shell.

Adding to @Louis Maddox 's answer, I would execute tmux part with;

None of the above responses worked for me - exec tmux prevents me closing tmux without quitting the shell (whether it's opened with Ctrl + T or from the application menu).

I use Linux Mint, which lets you map certain hotkeys to commands, and (un-kosher as it may be to some..) I've got bash shells with commands starting up there, e.g. Win+Alt+B does some sort of convoluted bash -exec(vim) statement to edit my .bashrc, so it acts like a regular shell.

tmux loaded rather than vim under that situation after placing the above at the top of my .bashrc. I've wrapped the tmux executing line in another if statement, checking that it's running in interactive mode.

You could wrap all that onto one line but for readability I think that's fine.

If the TMUX environment variable is unset/empty, then we're not already in a tmux session, so...

If tmux has-session returns with a zero exit status (true), there is an available session to attach to. Attach to it.

If not, create a new session.

It's also possible to use tmux as your login shell. If you do this, however, make sure to set default-shell to an actual shell in your ~/.tmux.conf file (see the tmux manual for more info about this).

You could (and as of now probably should) use sudo chsh $(logname) command to set /usr/bin/tmux, or whatever is the path to it, as a default shell, then add the following to ~/.tmux.conf:

The following solution is built upon the given solutions. The difference being, If you are using a DE and try to use 'Right Click > Open In Terminal' then it will open in current location.

I had an issue where I could not login (on Ubuntu 20.04). I added the following tweak to huangzonghao's answer:

Add the below line to ~/.config/fish/conf.d/omf.fish

The above worked on Fedora 34. However, on exit, only tmux is exited and the running session remains active.

There seem to be two classes of answers here:

This second method can be simplified and made more efficient with:

The -A flag to new (short for new-session):

In addition to being more concise than the longer form, it's also theoretically slightly more efficient, since tmux only has to start once, rather than potentially twice (once to check, again to actually run if it wasn't running).

I use a slightly longer form personally:

I do still recommend wrapping this in an if statement per user7089's answer.

Add this into your ~/.tmux.conf

As Mikel already stated in his comment to have tmux as your login shell can have side effects. But you can make tmux your default shell, literally. A user's default shell is defined in /etc/passwd. So you can become root and edit /etc/passwd, e.g. sudo vi /etc/passwd search for the line that begins with your username. It probably ends with :/bin/bash. Change /bin/bash to /usr/bin/tmux and now tmux is your default login shell.

However, no guarantee that this won't cause problems!

What may work better is to NOT do anything that requries root privileges. I would try to create a file in my home directoy named .bash_login and start tmux from within that file: `echo "tmux" >~/.bash_login.

This should work, but you have to try and find our yourself, b/c the bash documentation is not very exact about what file is read and executed when.

Not the answer you're looking for? Browse other questions tagged bash shell terminal tmux bashrc or ask your own question.

450
Why not use "which"? What to use then?
177
How to start tmux with attach if a session exists
6
What are the pro's and con's in using the "-l" in a script shebang
2
Switch between light and dark mode in Vim and Tmux with one command?
1
How can I set my default shell to start up vim terminal?
0
Do not run code block when exit from tmux
0
Set default shell to tmux with options