I'm looking for a program to use as a calendar.

The first observation that I would make is that Google apps would be perfect except for two things: it is online, and it is online. The first difficulty I have with Google Calendar is that because it is online I would not be able to make use of it when I'm not online.

The second difficulty that I have is that because it is online, I need to use a browser to access it, which means I have to have Google Calendar open somewhere on my browser. Given the state of, well, my browsers state is not a good thing. I could use a "lesser" browser dedicated to the job ( like Konqueror or Midori ), but I'm not sure they are up to it. I could do what I do for Zap2it and tvlistings create a separate account but that would prevent any sound during an alarm.

My setup is a small desktop, running Debian testing, and a laptop running Ubuntu Lucid, sometimes Vista. In the future I plan on getting a tablet running Android ( ICS ) or later. I need to sync across all these platforms. On the linux machines I am running KDE 4.whatever. I don't object to a Gnome-based ( GTK ) applications but I know there are programs in both camps which start up enough parts that it is like you are running two DE's. I would like to avoid that.

As for the application itself, there are several things I'm looking for. The ability to set alarms, a daily view, a weekly view and a monthly view. I would like to group events so that I can display only some of the groups at once. Free floating events ( Events which are open-ended on time. ) would be nice. So would a more interactive GUI. ( As opposed to some application that just prints the day of the month. )

Someway to thoroughly sync across Linux, Android, and Vista. I guess if it can sync to google calendar that would take care of things.

Finally a way of scripting events would also be nice, though I think if I can sync with Google Calendar, gcalcli would do the trick.

software-rec calendar
Share
Improve this question
edited May 8, 2013 at 8:03

Thunderbird+Lightning is a great choice of calendar application, but these will allow you to view and use the calendar, not sync it.

I would suggest these two sync options which are independent of Google :

Remind is a sophisticated calendar and alarm program. It includes the following features:

It looks pretty nice, it is able to run what ever scripts you would need to per the remind schedule file (plain text) and has PS and HTML available for viewing.

This program is becoming venerable, development since 1989, and continues to be updated.

You can check the wiki for recipes and use cases.

And yes, Virginia, there is a GUI for that. Linux Journal

I use Google Calendar, syncing it with Thunderbird+Lightning on two Linux machines (desktop and laptop), and with two Android devices. The nice thing about using Google Calendar here is that it just works... Android automatically knows how to talk to it, and Lightning talks to it without trouble. Everything syncs to Google Calendar and none of the apps know about the other apps syncing to it. I use multiple calendars to track personal, work, my wife, my son, a hobby group, etc, and those can be selected individually in the apps. (I don't see all my "personal" calendars when I'm on my work machine.)

I also keep Google Calendar open in a separate instance of Firefox when I'm online... I start my normal Firefox (default profile) normally, and then I start my "work" profile instance with

Starting the default first causes links from other apps to open in the default instance and not the alternate profile instance. That allows me to have an instance for Google Calendar and my work ticket system, etc that doesn't have a bunch of plugins I don't need, and I can restart it without affecting my primary instance.

I use the following everyday and maintain 5+ Google Calendars. With this setup I'm able to connect from multiple Thunderbird instances and keep them all in sync. Any device that's able to sync to Google Calendar can also participate in this setup as well.

Once I have the addons mentioned above installed into Thunderbird, you just need to setup a calendar on Google Calendar, and go to that calendar's settings page. On the page are the "XML" & "ICAL" icons towards the bottom. 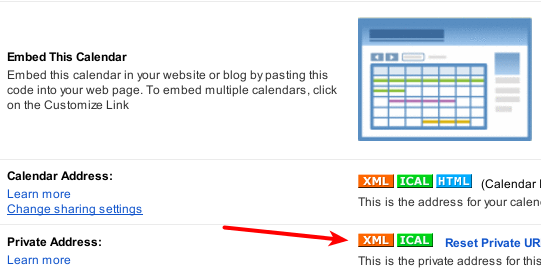 Once you've copied the Private XML URL link for the calendar, then go into Thunderbird and right click on the calendar pane (on the left side), just under where the Calendar's will eventually show up.

This will present you with a menu where you'll select "New Calendar". 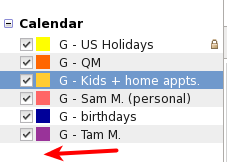 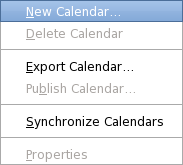 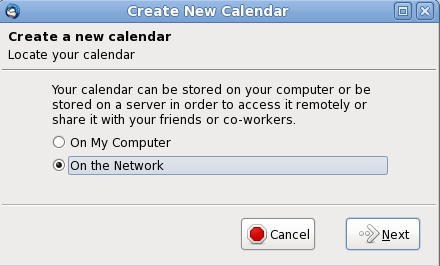 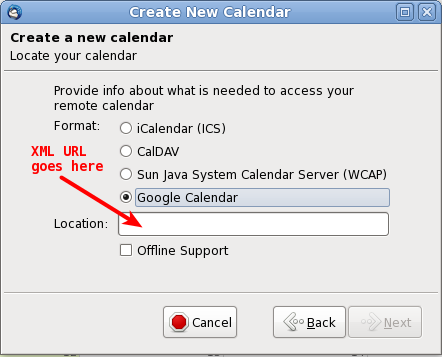 Once you complete going through the dialogs you should see a new calendar as in the 2nd screenshot above. If you right click on it, you can either force it to synchronize with your Google Calendar, or you can select it's properties. 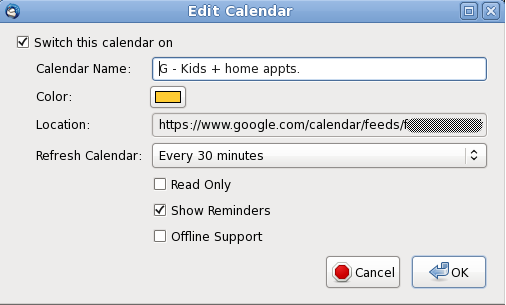 From here you can change the frequency of the sync, the name of the calendar, or the color you'd like to use for it in Lightning.

After years of slight testing and some hesitation, recently I decided to pay $25/year for pro account with Remember The Milk.

The first difficulty I have with Google Calendar is that because it is online I would not be able to make use of it when I'm not online.

Unfortunately there are currently no official Desktop apps for Linux.

However, RTM does provide API, and even seems quite popular among developers, so there is quite a number of unofficial pieces that are worth looking at, including things like command line clients.

From official ones I'm using the (new) Android app and I can say it's pretty well-designed and also fast on my Motorola Defy. (However, it's unusable without Pro account unless one sync per 24 hours is enough for you)

Basically same as above applies here: It's about finding the right app.

However, I also must say that I while I was also hesitant in using their AJAX-y UI, soon I realized that it's very fast, well-designed and works perfectly in Opera, which is often one of the most neglected browsers. So you might consider it worth trying in something really lightweight.

However, provided that you actually are online to some extent, one of RTM's strengths is support of many technologies:

So depending on your style and offline/online schedule, you can get to the point that the problem with missing application is minimal.

If you are already running KDE, you can use the built in Kontact to manage Google calendars.

The first difficulty I have with google calendar is that because it is online I would not be able to make use of it when I'm not online.

Kontact, and most other programs, will sync the local and online calendars whenever you are online. This means you can access the last synced version even when you are offline.

Again, there are lots of programs that use the Google calendar API to access the data without needing to run a browser.

Not the answer you're looking for? Browse other questions tagged software-rec calendar or ask your own question.

4
Workflow management software for Linux
4
Which application to use for a calendar?
0
Music management software that sync playlists onto Android device
2
Recommendations for good MTA / groupware solutions?
4
Google calendar in the terminal
3
Is there a gui options for passwordstore
1
Generate Calendar Text File in Linux
0
Calendar question in unix
0
Syncing Calendar with phone