Lots of red in htop — does that mean my tasks are tripping over each other? 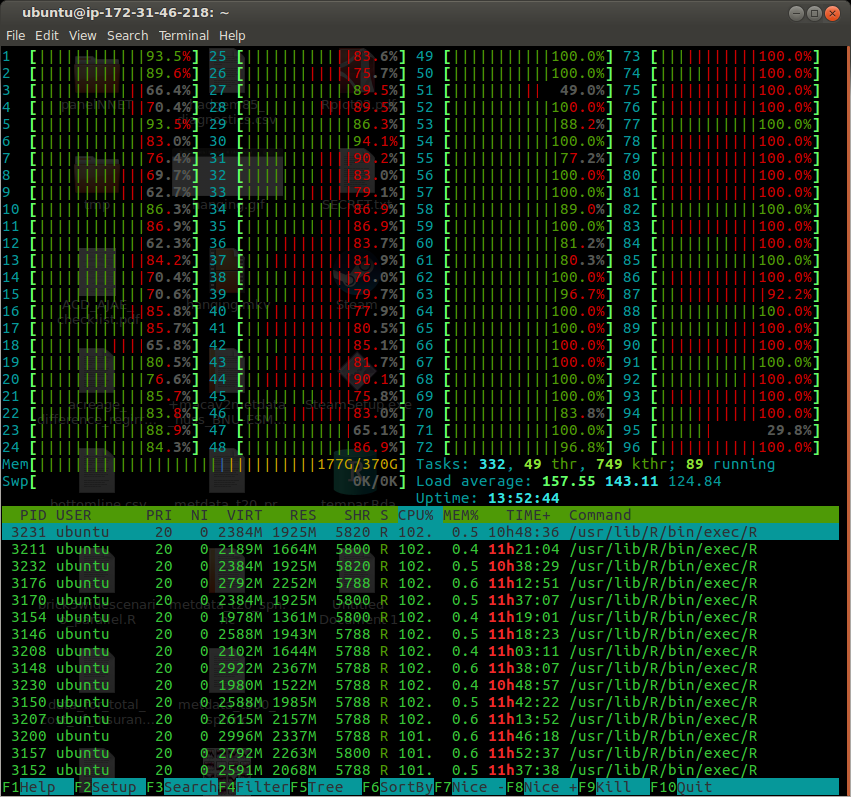 I've read that the color red indicates "kernel processes." Does that mean little daemons that are regulating which task gets to use the CPU? And by extension, transaction costs in an oversubscribed system?

I'm running some large-scale geoprocessing jobs, and I've got two scripts running in parallel at the same time.

The first script does the actual processing, on all 96 cores. It is responsible for almost all of the memory use.

The second script uses curl to download the data to feed the first process, and it does so in parallel. I wrote it to download only until there are n_cores * 3 files downloaded. If that constraint isn't met, it waits for a minute or so and then check again. So, most of the time it isn't running -- or rather it is executing the Sys.sleep() command in R.

I've experimented with using fewer cores for the downloading process. When I do so, it can't keep up with the processing script (I'm DLing from S3).

TL;DR: Would my processes run faster if I could make htop less red? And are they red because there are more processes than cores?

Red represents the time spent in the kernel, typically processing system calls on behalf of processes. This includes time spent on I/O. There’s no point in trying to reduce it just for the sake of reducing it, because it’s not time that’s wasted — it’s time that’s spent by the kernel doing useful stuff (as long as you’re not thrashing, so look at the number of context switches etc.).

I've experimented with using fewer cores for the downloading process. When I do so, it can't keep up with the processing script (I'm DLing from S3).

suggests that your current setup is evenly balanced between the I/O needed to feed the processing, and the processing itself, which is a rather nice result. If you suspect that you’ve got too many processes running, and that that’s causing waste (by thrashing), then you could try reducing the number of geoprocessing jobs, to see if your overall throughput increases. The usual benchmarking tips apply: identify what you’re going to tweak, determine what resulting variations could occur and what they mean, only tweak one thing at a time, and measure everything.

Not the answer you're looking for? Browse other questions tagged kernel curl parallelism r htop or ask your own question.

18
using parallel to process unique input files to unique output files
23
Four tasks in parallel… how do I do that?
3
Running jobs in parallel on Ubuntu - I/O contention differences between Perl and Java
106
What does the (!) mean after uptime on htop
1
setting (system-wide) CPU affinities for running processes on a Linux platform
10
correct xargs parallel usage
1
When running multicore jobs, will I lose performance if system load averages above the number of cores?
3
Parallel running with only limited CPU cores
1
Are subshells run in parallel by default?