I'm using Linux Mint as day-by-day OS, but I'm having a hard time with RAM usage, as 4 of 16 GB are used just when idling... Why is this happening? Is it something I forgot to configure? What can I do to lower RAM usage? I only have Skype, Spotify and Discord open. 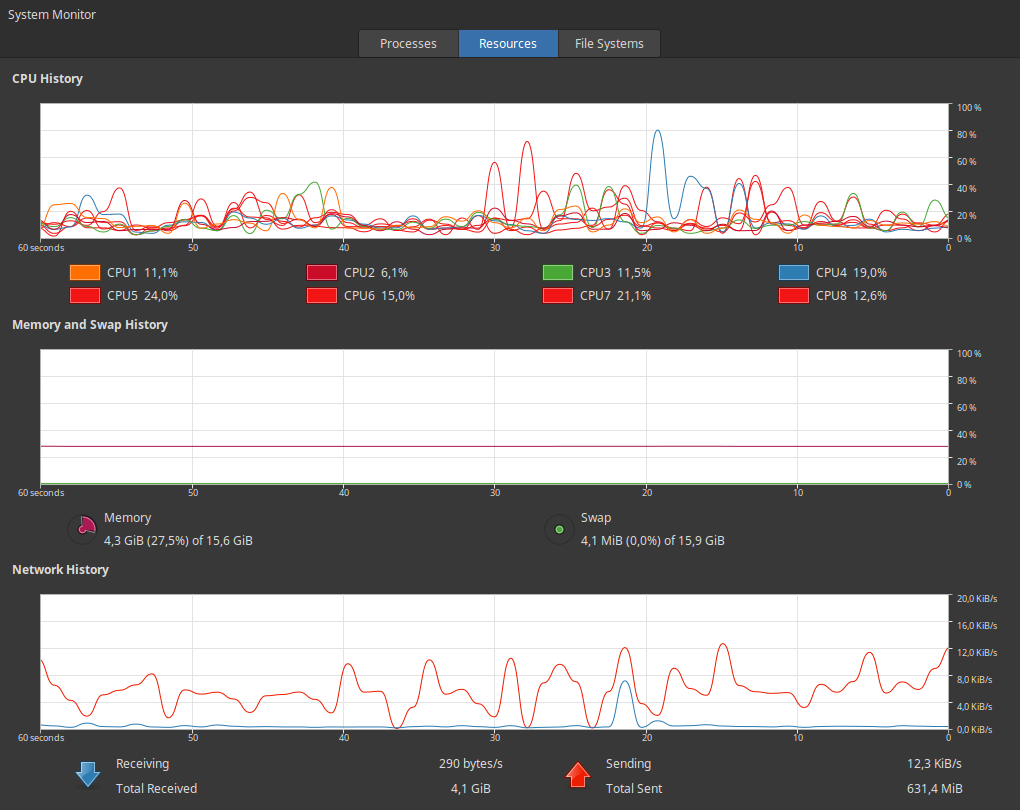 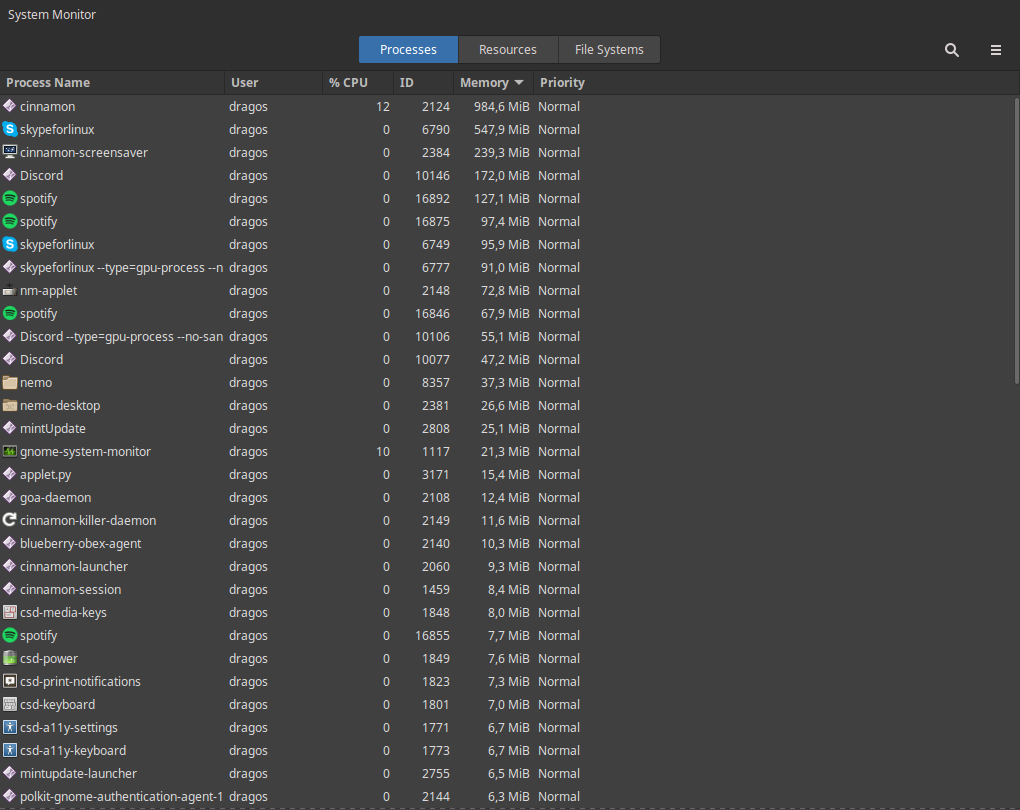 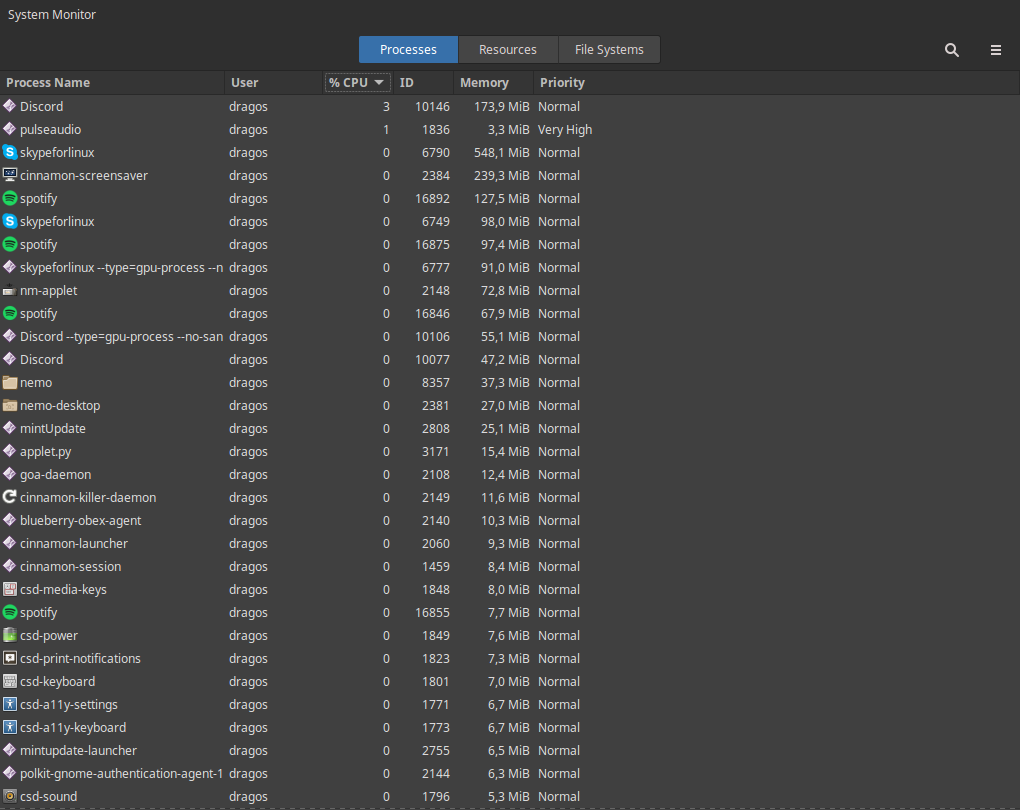 You could close the unused programs, the bulk of it though is coming from Cinnamon (desktop environment), nearly 1GB which is a little high but believe it or not is about right for idle use.

See this post (granted its not for Linux mint)

There is nothing out of the ordinary about the output you have provided. If you want to use less ram in an "idle" state, i suggest closing all applications (skype, spotify, discord).

Closing those app's would save you around a couple GB.

You can of course get rid of cinnamon...But i wouldn't be too bothered, your memory inst spiking, it seems to be consistent.

1GB in the cinnamon process alone seems relatively high to me. At least two sources, including links in other answers, suggest the whole system should use on the order of 800M when you initially boot and log in to Cinnamon.

1) It looks like Cinnamon version 4.0 includes significant fixes to memory management, based on the upstream GNOME project(s). I don't know if the fixes have been ported to earlier versions. (Also I am not 100% certain that Cinnamon suffered the same problem as upstream GNOME, but it is looking very suggestive :-).

I note the gnome-shell process on my Fedora Workstation 29 (which includes these upstream fixes) currently shows as using somewhere between 200-400M. (Although processes like this may be pinning more memory in less obvious ways).

2) The bug tracker and other sources say to be wary of any Cinnamon "spice applets, desklets, extensions", and non-default themes. They may cause the main cinnamon process to leak memory. I.e. make sure to test without them.

3) ghu knows what cinnamon-screensaver needs over 200M resident for when it's not active. It does not make me happy. Maybe also be some sort of leak. i) Try using whatever the default screensaver setting is, if you changed it. If you're not sure what the default was, try a blank screen option. ii) This might suggest a graphics driver problem - this can definitely be an issue, though I don't know if it's your main problem.

I make no promises! Maybe you can keep memory usage down to 3GB on idle, maybe not. If you can, it is not clear from your question that you would not consider 3GB on your "idle" load to be "high" as well :-).

4) If you are interested in learning about Terminal tools to look at memory usage:

Not the answer you're looking for? Browse other questions tagged linux linux-mint ram or ask your own question.

15
real memory usage
9
Swap usage too high?
2
should I reduce /dev/shm size?
8
How to interpret busybox "top" output?
1
How shall I understand the output of free?
1
Linux box with 100% used swap and 60% available RAM - is it normal?