but seems this isn't working anymore.

PS.: my motivation to this is because I use the Yakuake terminal a lot, and it would be awesome to tweet from there.

This error message is because Twitter needs OAuth for authentication. Take a look at TTYtter if you don't mind a Perl app:

TTYtter has been deprecated. Development now continues in the fork, oysttyer.

Try T. Very powerful, easy to use and written in Ruby.

For example, you can tweet directly from the terminal, by executing:

There is a project called Twurl - an OAuth-enabled curl for the Twitter API:

It also provides other development and debugging conveniences such as defining aliases for common requests, as well as support for multiple access tokens to easily switch between different client applications and Twitter accounts.

Instead of this from the question:

after you authorize yourself first as explained in the readme.

This program was originally written by Marcel Molina who worked at Twitter at that time and it is now an official Twitter project on GitHub.

Many people are asking specifically how to use curl to use the Twitter API and twurl is probably the closest to curl as you can get today.

Take a look at Rainbow Stream - smart/beautiful and written in Python. It provides a rainbow shell which can start by

and inside the app, updating a status is quite easy with

I have created a Twitter client that can tweet from the command line, as mentioned at Software Recommendations. 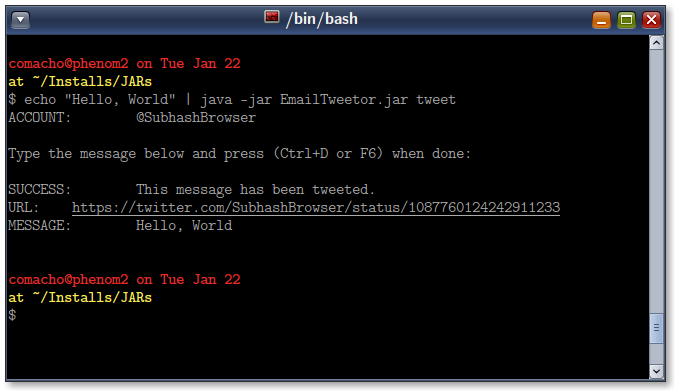 The computer where the command is launched will need to have OpenJDK or Oracle Java v1.8 or later. The JAR also needs a one-time authorization with Twitter.

Not the answer you're looking for? Browse other questions tagged shell-script command-line curl or ask your own question.

78
How can I get bash to exit on backtick failure in a similar way to pipefail?
3
Errors while invoking Web service using `Curl` command from Unix terminal
3
Posting XML through cURL using --data-binary
0
Protocol "http" not supported or disabled in libcurl
5
Checking a URL redirection from terminal
5
dash maximum variable length under systemd
1
Logreader is too slow to be functional
1
How to continue running the script when a script called in the first script exited with an error code?
1
How to make libreoffice headless conversion act differently on file loading error