I've recently switched to using dwm and have been bumping up against a weird behaviour in Firefox, when clicking the right mouse button.

Above is Firefox opening a context menu under most window managers. (This particular shot is taken in i3, but it's the same in Gnome and other window managers and desktop environments). Notice that the context menu appears a couple of pixels down and to the right of the cursor's hotspot, so that releasing the mouse button won't activate anything from the menu; the menu remains open and you may select something from it with a subsequent click.

By contrast, the above shot is of Firefox opening the context menu under dwm. Notice that the context menu has appeared directly under the cursor's hotspot, so pressing and releasing the mouse button instantly triggers the 'Open Link in New Tab' item and closes the menu. (This same thing also happens with the 'Back' option, if you do a right-click that's not over a link)

This only seems to happen in Firefox; Chrome's context menu appears in the correct place, as do the ones in Gnome Terminal and Gimp. Has anybody else bumped into this and know of a fix?

This appears to be a bug either in dwm (version 6.1) or in Firefox (version 57.04), but here's what lead to this misbehaviour:

In dwm's configuration file config.h, there is the following line:

For example, here's where Firefox's context menu opens relative to the cursor if you set borderpx to 30: 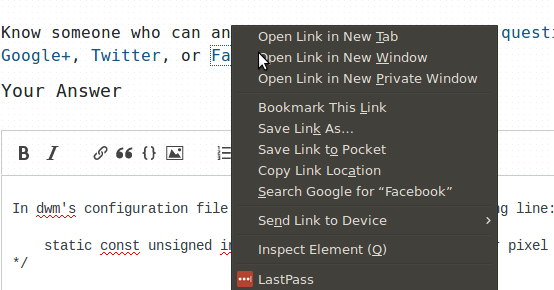 Any value above '2' will result in Firefox's context menu opening up with an active part of the menu appearing directly beneath the cursor's hotspot, and thus automatically being activated if you do a single right-click. So to work around this issue, you need to reduce borderpx to a value of 2 or lower. (Or, I guess, increase it to over 268, if you'd like to make the context menu appear entirely to the left of where you click, and are okay with absurdly thick borders around all your windows)

Not the answer you're looking for? Browse other questions tagged firefox dwm or ask your own question.