How to disable one CPU

I'm trying to disable some CPUs of my server.
I've found this link: https://www.cyberciti.biz/faq/debian-rhel-centos-redhat-suse-hotplug-cpu/linux-turn-on-off-cpu-core-commands/, which offers me a method as below:

Here is what numactl --hardware gave me: 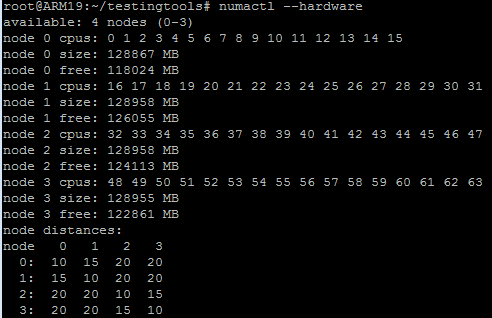 I want to disable all CPUs from 16 to 63, so I write a script named opCPUs.sh as below:

Then I execute it: ./opCPUs.sh disable and I can see the result of grep in the script: 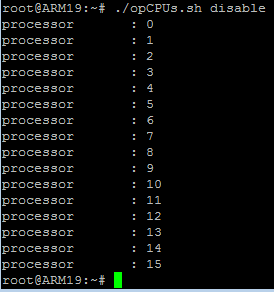 It seems to work.

Now I think all of processes should be in CPU 0 - 15 because others have been disabled.
So I use the existing processes dbus to verify as below:
ps -Lo psr $(pgrep dbus) 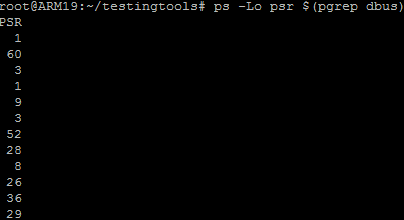 The psr tells me in which CPU the process is running, right? If so, I have disabled CPU 60, CPU 52 etc, why they are still here?

Besides @Yves answer, you actually are able to use the isolcpus kernel parameter.

To disable the 4th CPU/core (CPU 3) with Debian or Ubuntu:

In /etc/default/grub add isolcpus=3 to GRUB_CMDLINE_LINUX_DEFAULT

Description Remove the specified CPUs, as defined by the cpu_number values, from the general kernel SMP balancing and scheduler algroithms. The only way to move a process onto or off an "isolated" CPU is via the CPU affinity syscalls. cpu_number begins at 0, so the maximum value is 1 less than the number of CPUs on the system.

This option is the preferred way to isolate CPUs. The alternative, manually setting the CPU mask of all tasks in the system, can cause problems and suboptimal load balancer performance.

Interestingly enough, the usage of this kernel parameters can be setting aside a CPU for later on using CPU affinity to one process/pin a process to a CPU, and thus both making sure there are no more user processes running on that CPU.

In addition, also can make the server more stable having a guarantee a particular process with a very high load will have it´s own CPUs to play with. I have seen Meru doing that with their Linux based controllers before becoming aware of this setup.

The associated command to then assign a process to the fourth CPU (CPU 3), is:

There are several techniques applied to this question :

set isolcpus = 4 in grub and reboot can disable the 5th CPU/CPU 4 permanently for user land processes;

echo 0 > /sys/devices/system/cpu/cpu4/online disables the 5th CPU/CPU 4, that will still keep working for the processes that have already been assigned to it but no new processes will be assigned to CPU 4 anymore;

taskset -c 3 ./MyShell.sh will force MyShell.sh to be assigned to the 4th CPU/CPU 3 whereas the 4th CPU can still accept other user land processes if isolcpus is not excluding it from doing that.

PS. Anecdotally, my best example of using the isolcpus/taskset on the field, was an SSL frontend for a very busy site, that kept going unstable every couple of weeks, where Ansible/ssh would not let me in remotely anymore.

I applied the techniques discussed above, and it kept working in a very stable fashion ever since.

After doing some tests, I got the results as below:

does disable the 4th CPU.

to force the ./MyShell.sh to be assigned to the CPU0.

By the way, reboot will enable all CPUs automatically.

Not the answer you're looking for? Browse other questions tagged linux cpu ps cpu-usage numa or ask your own question.

0
Disable any number of CPU cores between 1-n (where n is maximum available cores)
1
How to avoid high latency near OOM situation?
2
How to get one core of a quad-ARM running without an OS

3
Why does my cpu never get past 60-70% cpu usage? Where is the bottleneck?
9
Using only one cpu core
4
How to detect process's highest cpu usage during it's life
5
Globally setting CPU affinity
1
Set limits on CPU core utilization in Linux
0
How to get the number of processes waiting for CPU on Linux?
1
Fixing and utilizing 4/8 locked out physical cores in Ubuntu Linux kernel, Overclocked values also not seen in OS