Here is a picture of the problem: 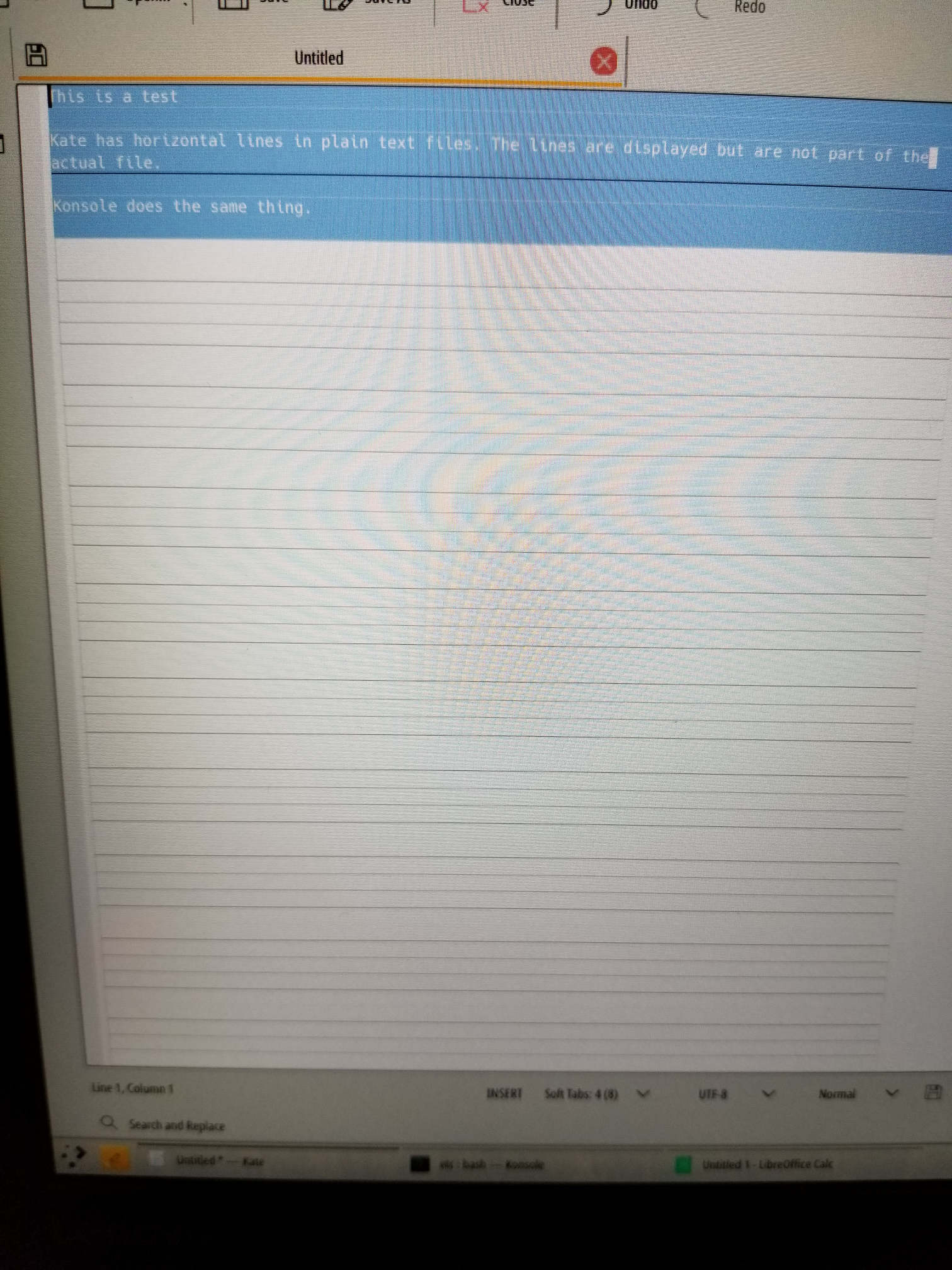 Notice that all lines of text have horizontal lines similar to underlining. However, this is a plain text editor (Kate) and it does not do underlining. There is no formatting applied to this text.

Konsole has the same issue. With white text on a black background, Konsole sometimes show multi-colored horizontal lines. Sometimes every line in Konsole has this ugly and distracting underlining. Sometimes only a portion of the lines have it.

I first saw this issue about a ten months ago on a desktop computer. I thought the user had just done something really crazy in font settings. But now I am seeing the issue on a new laptop without any significant settings changes from default.

However, the horizontal lines will not go away.

The applications work correctly (other than sometimes being hard to read text). Copied text does not include the horizontal lines. Commands in Konsole are not affected by the appearance of horizontal lines. It seems to be a display glitch, but it is not specific to any GPU (affects Intel or nvidia) or to any display screen (I tested different monitors on the desktop) or to anything else I can determine.

I tried various fixes on the affected desktop over the last ten months and I have not resolved it on that machine either.

I have multiple other Arch KDE computers that do not have the problem.

Does anyone have a clue as to what might cause this? Has else anyone seen it?

This is reported to have been resolved in QTBUG-66036 with version 5.12. As of the time I am writing this, QT on Arch Linux is version 5.11.2-1. Other common distros have also not released packages with Qt 5.12. However, when Qt 5.12 is released, the developers expect this issue to be resolved.

To check your Qt version, you can open a terminal and type:

The output will look similar to this

When you see Qt version 5.12, then you can expect a resolution. If not, let the developers know at QTBUG-66036.

In the mean time, there is a work-around, as described in the bug report below

There is a similar bug report for Konsole here

Upgrading to Qt 5.12 is fine, but does not seem to fix the issue straight away. In Konsole profile settings under the advanced tab, change "Line Spacing" to 1. This has fixed the issue with horizontal lines for me.

As a workaround, you could change the Fonts DPI:

Another workaround is setting Line Spacing to 1 under Settings -> Edit Current Profile ... -> Advanced -> Terminal Features. It's almost unnoticeable (one extra pixel between lines), but fixes the issue.

After following Nico's instructions about changing the system text DPI to something higher like 144, 192, etc., there is a way to turn on display scaling again and have Kate looking good. However, results may vary between desktop environments.

Set your display scaling to the desired fractional value (I happen to use 1.5x).

You can set the environment variable QT_SCREEN_SCALE_FACTORS=1 for a single call to Kate.

Then make sure that $HOME/bin is in your $PATH. If it is not, then you can add it by

Add that to ~/.profile to make it permanent.

Note that in order for this to work, your home scripts must come before the path of the original Kate executable (e.g. /usr/bin) in your $PATH environment variable. 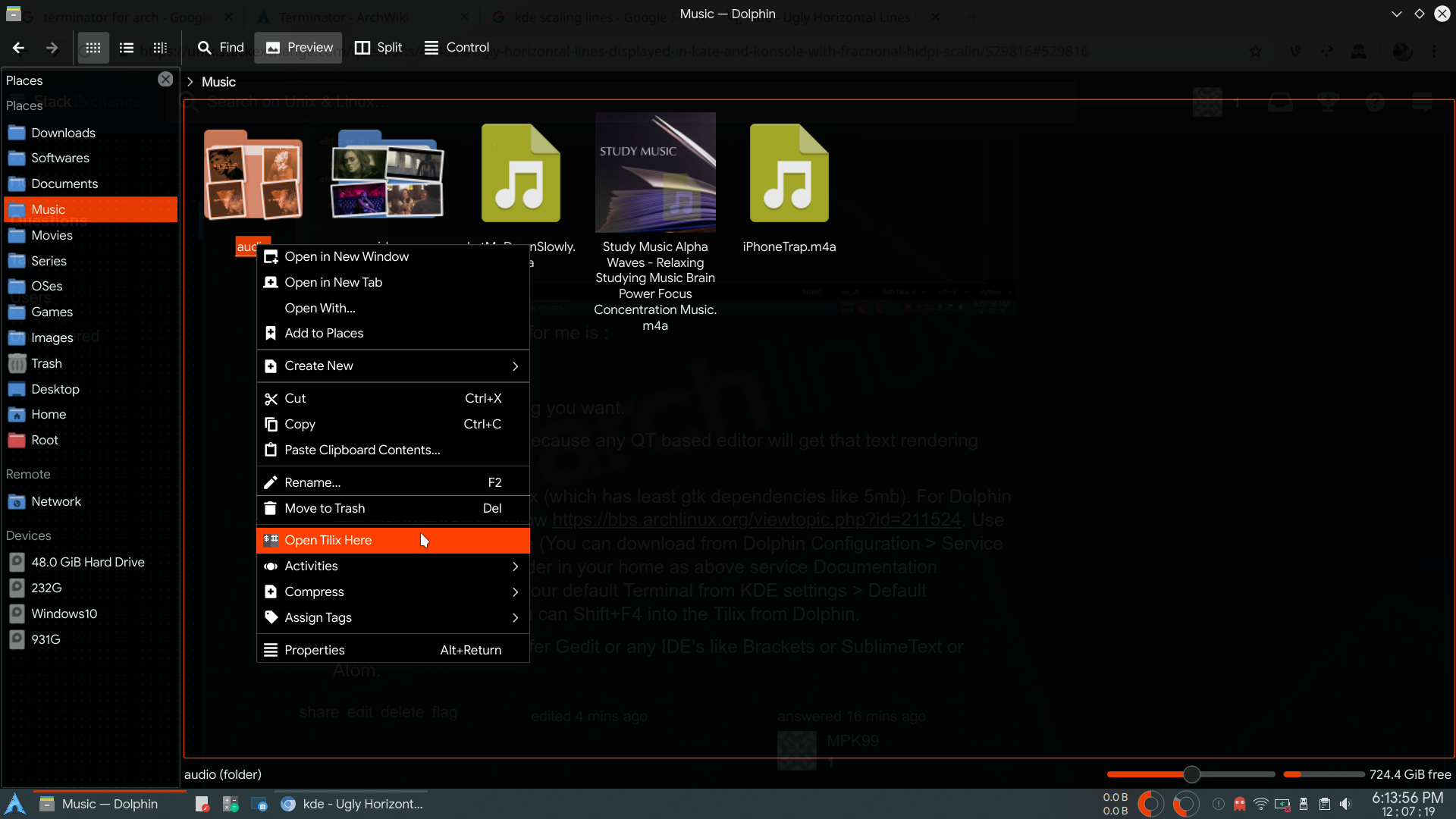 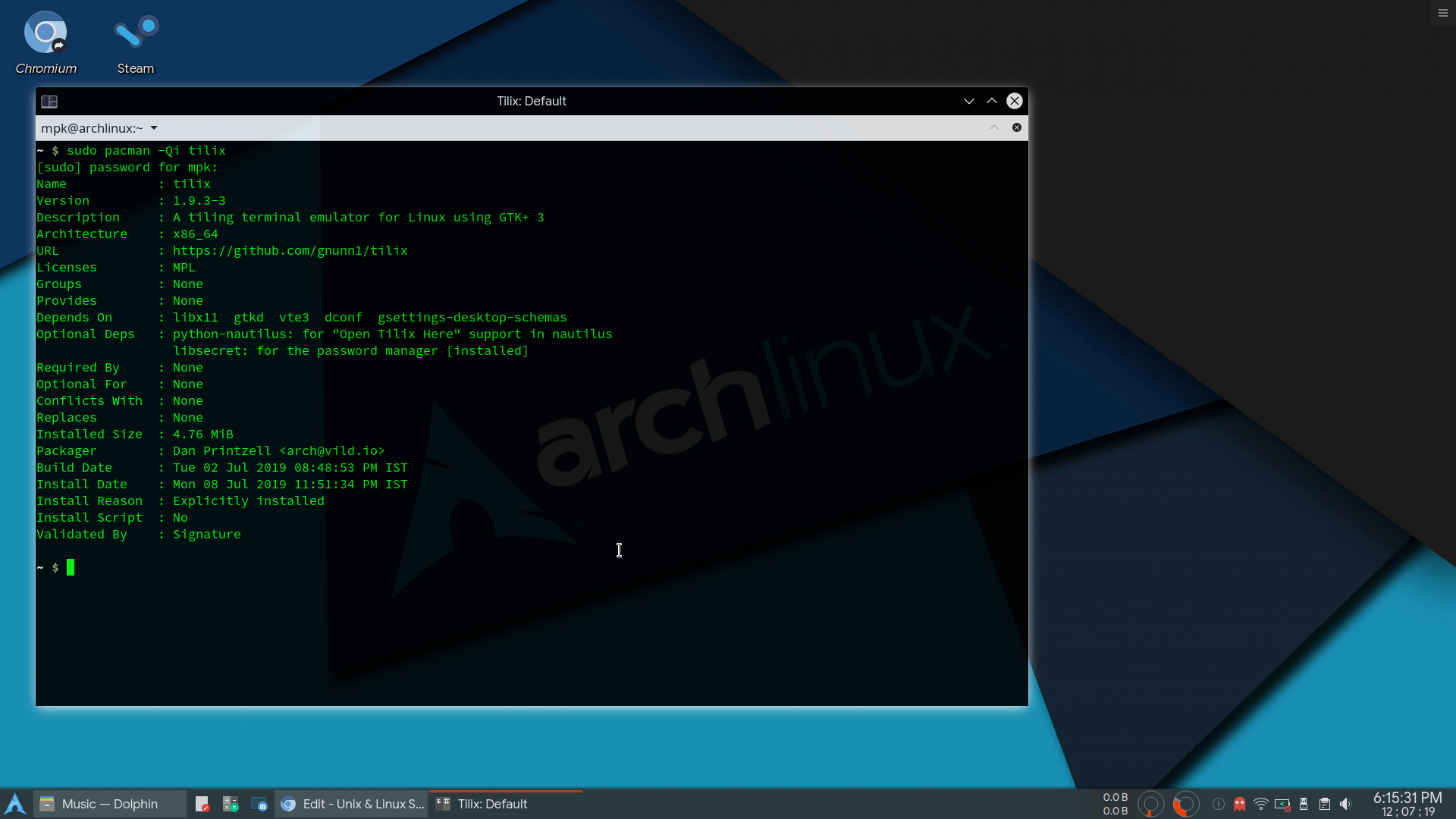 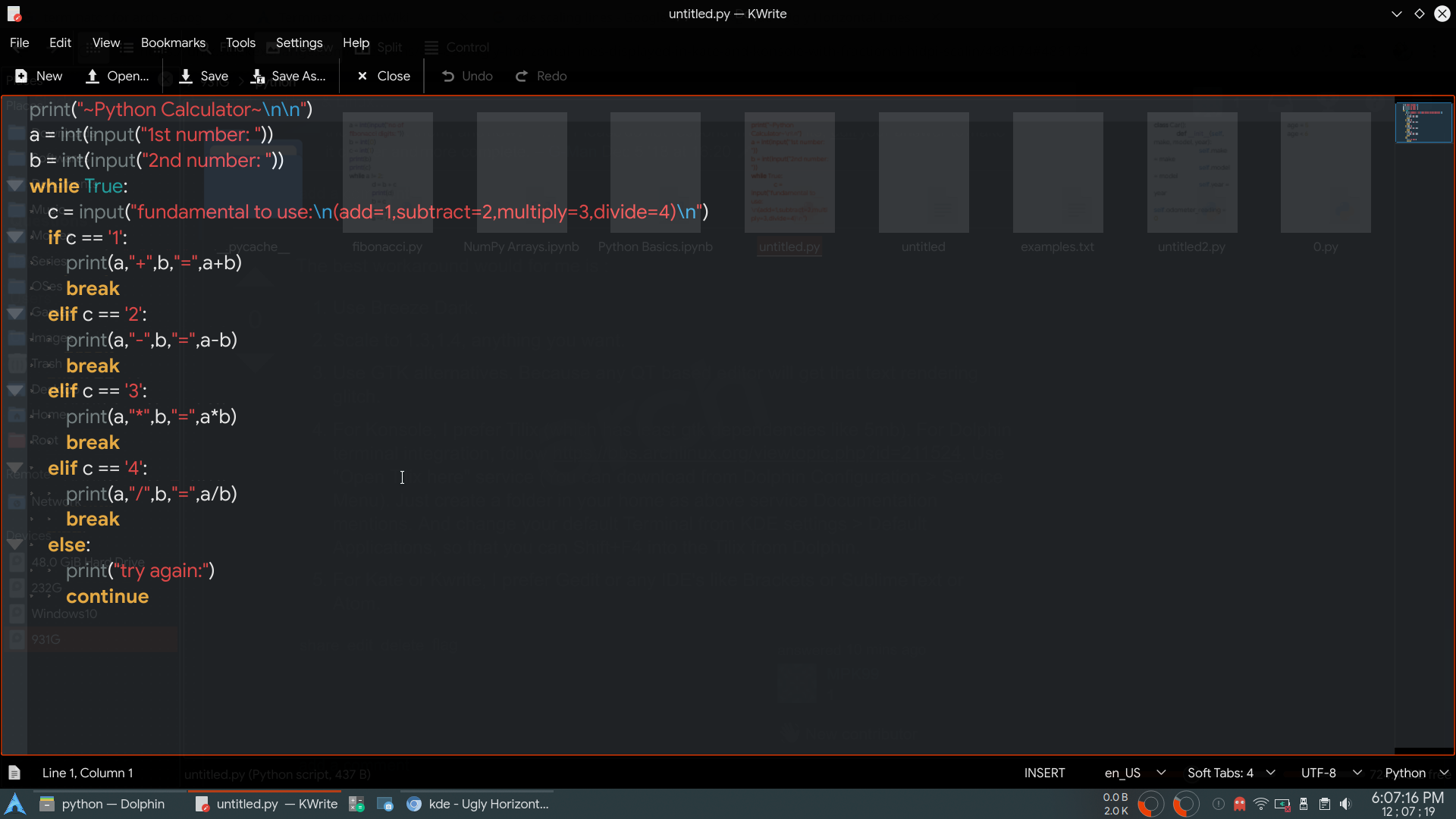 The best workaround would for me is :

Not the answer you're looking for? Browse other questions tagged kde konsole plasma5 kate or ask your own question.

1
Awesome floats some programs by default
1
Install Kate with Konsole Terminal plugin in Fedora23
1
Linux Mint - Right click URL in bash, select “open link”. And I get this error
1
How to set default color and font schemes for different katepart applications
4
How to restore horizontal application menu in KDE Plasma 5?
2
Fonts too large. Where are all the places display scaling or dpi could be specified?