I found a file formatted with Markdown. Could you guys suggest what viewer that I could use to view this type of files? Hopefully one without gui (if it's possible)

Update I was actually looking for a viewer that could parse markdown file format that does not need any conversion. But something close to that should be ok.

You can use Grip, which renders the Markdown exactly as GitHub would (it uses the GitHub markdown API).

Install it with pip:

To render a file example.md: 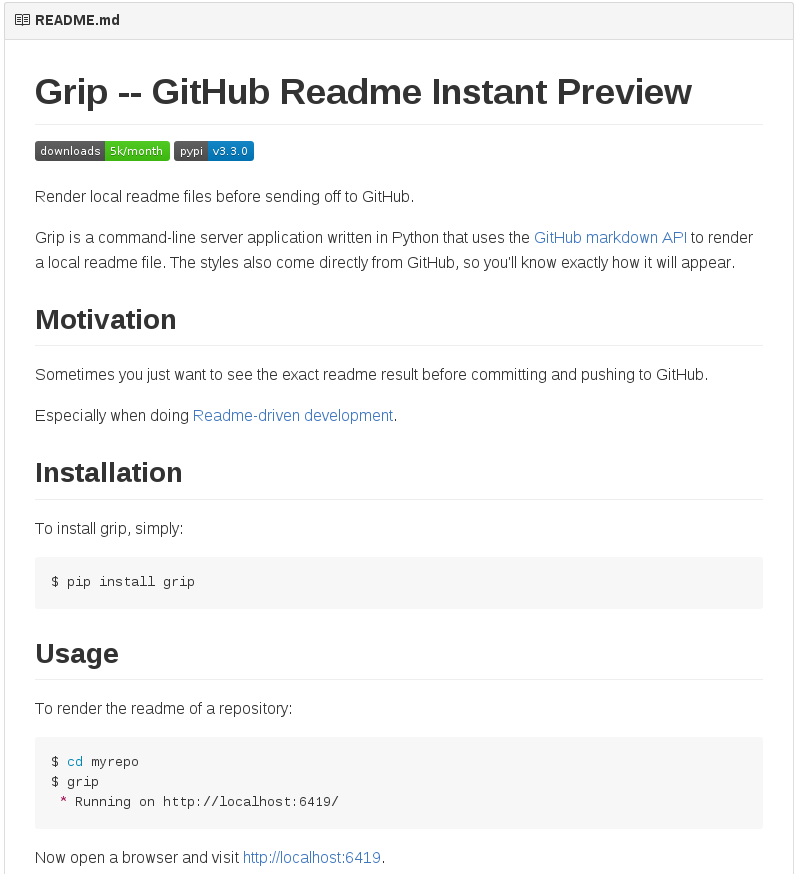 I wrote a lightweight terminal markdown viewer in python, for CLI or as lib:

It supports e.g. tables, admonitions and tons of color themes. 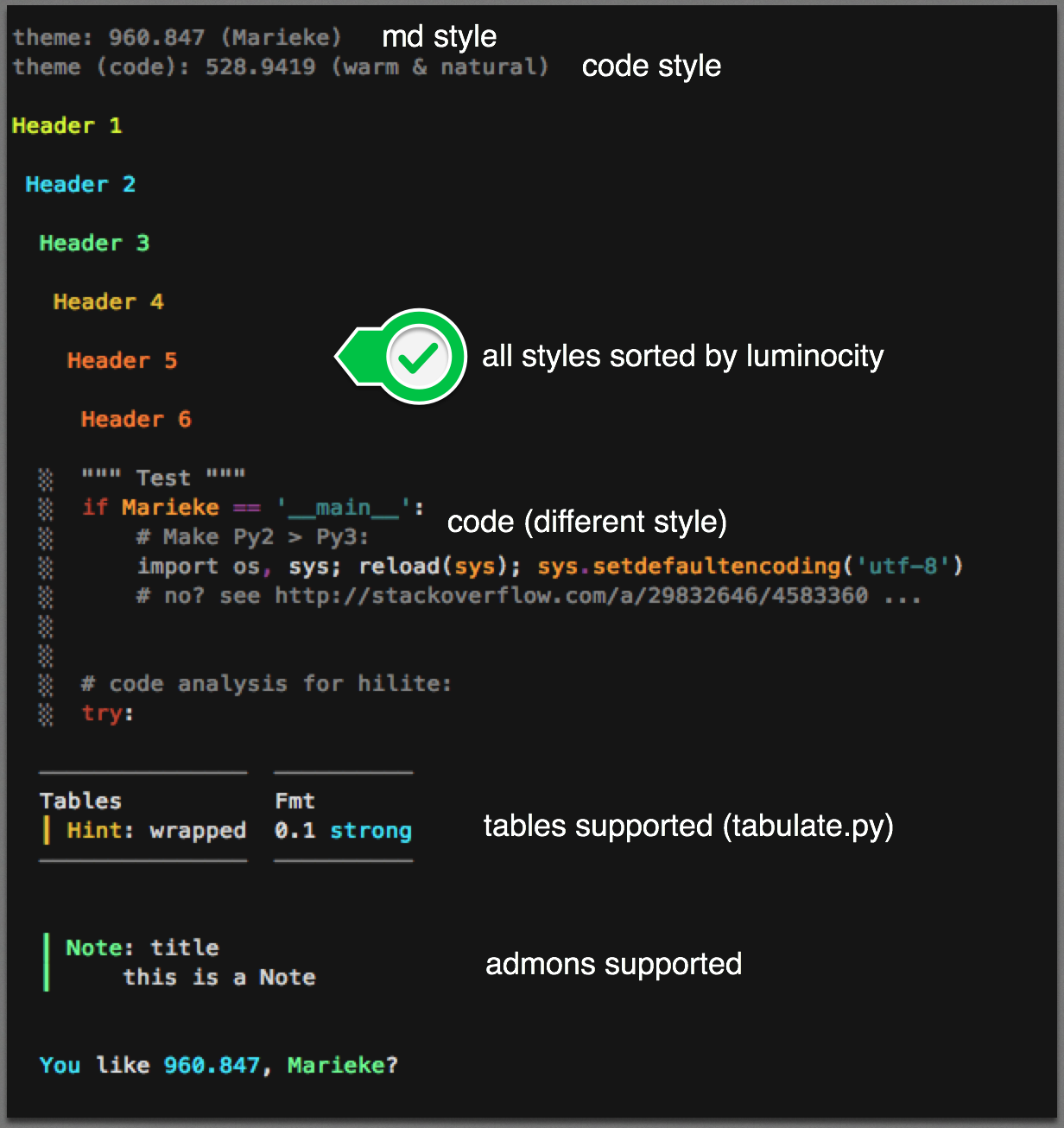 The following website provides a tool that will translate markdown into HTML:

Once you convert the file to HTML, there are a number of command line tools to use to view the file. Using a test file that contains markdown formatted-text, I found the following worked nicely.

html2text is one of many tools you can use to view html formatted text from the command line. Another option, if you want slightly nicer output would be to use lynx:

If you are an emacs user, someone has written a mode for markdown which is available here: http://jblevins.org/projects/markdown-mode/. This provides nice syntax highlighting as can be seen in the screenshot on that website.

All of these tools should be available for slackware.

Is a GUI program, but I find useful for this task ReText, that is an editor for Markdown and reStructuredText with a preview mode: 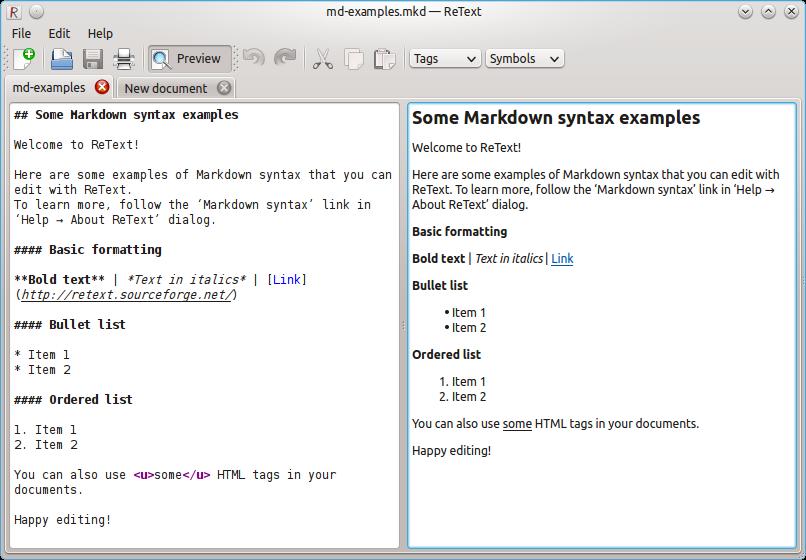 However, if you need see the file of ReText from a terminal, one option could be convert the marddown to html with pandoc and see the html copy in lynx:

There are a few more free markdown editors with preview available for *nix systems. Some in official repositories, others not, and each with their own strengths and weaknesses, but as suitable viewers I would like to highlight these:

For R Markdown users, I should mention also editR. Is not a program, but a R package to edit/html preview of R Markdown in a browser. R Commander and RStudio also allow a easy preview in HTML, PDF or Word.

Now RStudio have a source and visual edit mode. The last is like type in a HTML preview, but we aware that this mode write the source markdown in their own way and rewrite any existing markdown with an alternative syntax. For example, the visual mode will change existing inline footnotes (as ^[text]) by normal labeled footnotes. This will not change the output, but could be annoyingly that a minimal edit in visual mode might reformat the whole source text.

For those who prefer w3m (vi style bindings):

I put it in a script, mdview.sh, and put that in my path:

Use the mdless gem / command. It displays a Markdown file nicely in the terminal. 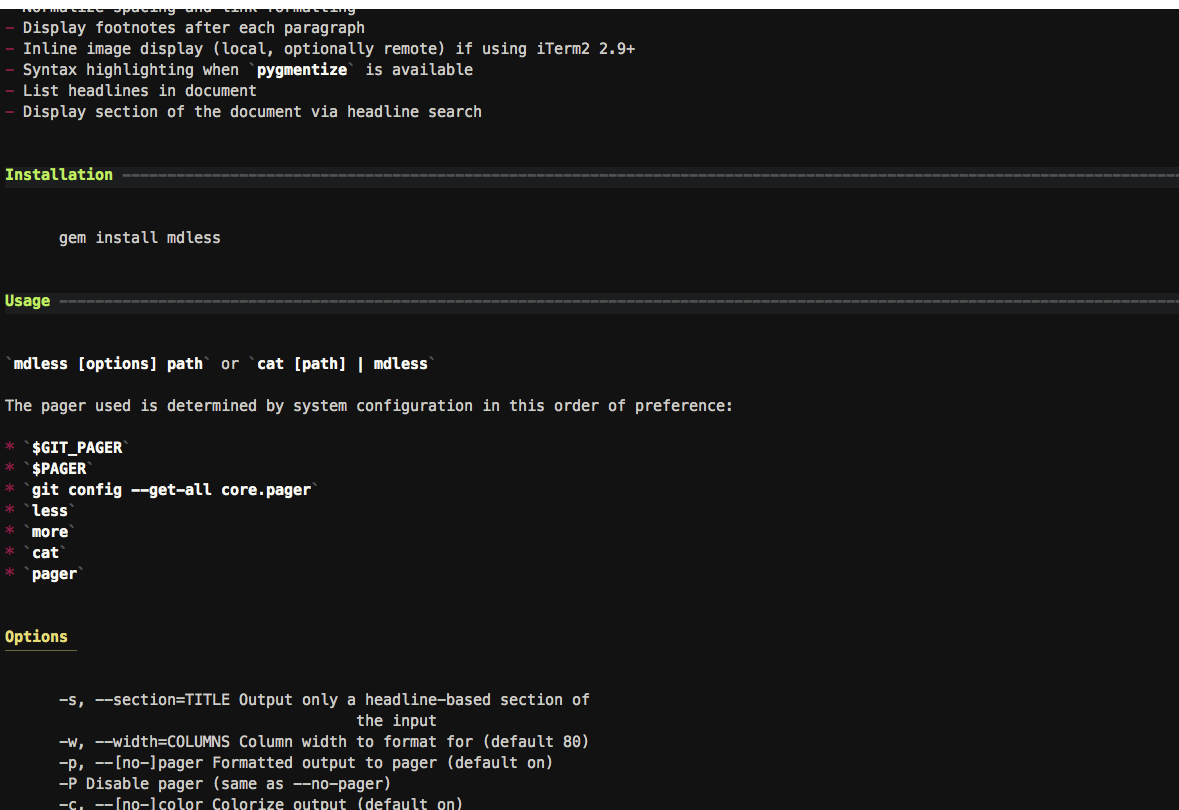 In addition, there's an implementation of markdown in C, using a PEG grammar.

On Mac OS X you also may have a look at qlmarkdown, a QuickLook generator for Markdown files.

I know you said you preferred a non-GUI application, but I am currently working on a GUI application called DownMarker which does this. You can find the source in a mercurial repository here. You can find a stand-alone executable to run with mono or .NET here.

Caveat: It is far from finished and only occasionally tested on linux/mono. Last test I did was on Mono 2.6. If you want to build it yourself will need a recent version of mercurial to clone the repository, and MonoDevelop to compile the application.

A couple comments asked about or mentioned the possibility of using a browser add-on. I like this approach because I can edit markdown files in any Linux text editor (from nano to vim to Kate) and view the files in Firefox (my browser of choice).

I simply installed this Firefox add-on and it worked out of the box on Kubuntu 12.04 and Firefox 33.0. No tweaks required.

(I also like ReText, but I would prefer to see something like ReText implemented as a plugin for Kate. ReText lacks too many features to compete with mature editors like Kate.)

Probably not noticed much, because it misses any documentation...
But as far as I could figure out by some example markdown files, some things that convinced me: I have realized the following issues

With Vim Markdown highlighting and folding up and running, the most straightforward solution is to evoke vim in the read only mode with either vim -R, or (at least on Ubuntu) more elegantly:

Add the following at the very bottom of your .vimrc file, and view will behave just like less with the added benefit of your favourite syntax highlighting (not only for markdown!) and folding:

There exists also a more rigorous less.sh script. On my system, it comes packaged with vim. To find it, use:

However, contrary to the script listed above, folding will not work with this less.sh.

(A wrapper I made around rich) 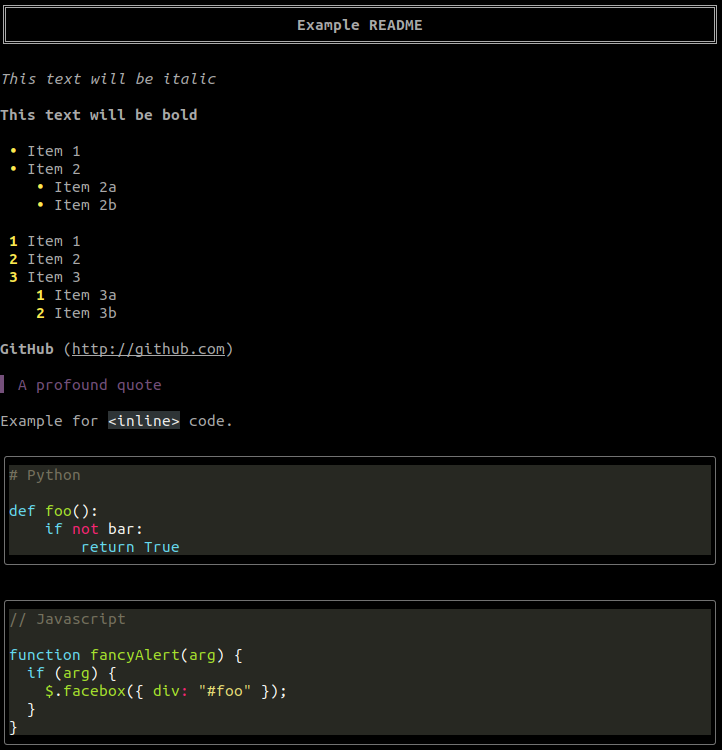 Assuming you want to see what the html looks like: Use a web browser (with an addon) as a viewer.

For example, for Google Chrome there's TextDown which also lets you edit files straight in the browser and see a live preview.

After adding it, you also need to go to chrome://chrome/extensions/ and check "allow access to file URLs" so you can open local files. A warning though: if you save (shift-ctrl-s) TextDown does not save to the file you opened but to your downloads folder.

I suggest taking a look at Atom. It is an excellent text editor with in-built markdown preview. I don't usually use the markdown preview mode as it has a serious bug - line breaks (unless they come in pairs which indicates a <p> tag's contents) are preserved in the preview. But the syntax highlight mode is so good (since Markdown is optimized to be human readable and Atom's colorization is excellent) that I usually end up reading markdown files in source view mode.

Mdcat can be use to preview it. As said here you can install binary for any platform. It can even preview images in md file in iTerm and Kitty
Syntax:

Here is a commandline script which opens up a markdown file in your browser after converting it into html: http://minhajuddin.com/2012/03/16/markdown-viewer-script-for-your-markdown-documents/

You could have a look at mad which is very easy to use:

This is an alias that encapsulates a function:

Add it to your ~/.bash_aliases (or alike)

The most painless way for me is to use mdless gem from Ruby.

I know this is a bit late, but KDE's Okular (sudo apt install okular on ubuntu) can view markdown quite well, and doesn't have any conversion.

batcat handles anything, and supports code snippets inside Markdown: 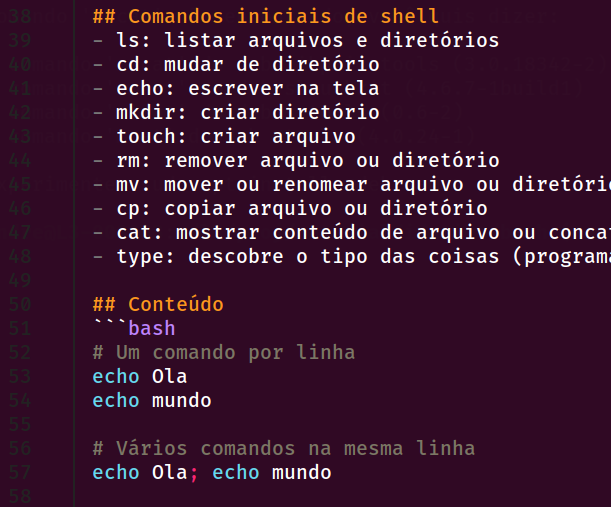 An easy solution for most situations: copy/paste the markdown into a viewer in the "cloud." Here are two choices:

'-f markdown' is optional. This will give you a nice enough preview with images right in the terminal window, the only downside is that you can't really distinguish inline code blocks.

You can install calibre software. It can be used to view markdown files.

Just stumbled on this nice, simple and effective markdown editor.

I use this function:

Will open readme.md if there's any

This is an old post but an up to date and far simpler solution, which should be compatible with any OS that supports Python is using the library rich.

After installing the library on your system you can render a markdown file straight from the terminal as follows:

A short example taken directly from the project github page:

You can see the content in raw (on the left) and the rendered markdown (on the right).

You can also choose whether to use a pager or not, in case you wish to use its features or your terminal does not support colors, hyperlinks, etc.

Not the answer you're looking for? Browse other questions tagged command-line slackware markdown or ask your own question.

3
rlwrap: mysql autocompletion not working
1
Gummi: Extend with Markdown functionality, or suggest Markdown editor
2
Is there a program that will launch a configurable context menu
1
PDF output with correct spaces in code examples
3
(How) can I display an rtf on the command line?
1
remote virt-viewer on the command line?
0
Lightweigtht pager with links?
2
Libre Office - convert calc/exel schedule to csv from command line
1
How to associate markdown files with a web browser?