After a default install of OpenBSD 6.2 with FVWM, I open an xterm on the FVWM GUI, with normal user, create a test file:

and the problem is that if I open the testfile with vi:

and with vim, a little better, but still problems with uppercase and a few lowercase:

Tried to set all the locale variables to "hu_HU.UTF-8" but didn't helped. What am I missing?

Back in the older days, afaik, there was "uxterm" to have UTF-8 support, but now, it looks like it is not in OpenBSD anymore.

If you make sure that you are using the proper locale, then you will be able the see the correct characters in vim and in nvi, but not in vi.

In fact, it works (in vim/nvi) with the en_US.UTF-8 locale as well. OpenBSD's vi is not UTF-8 aware. 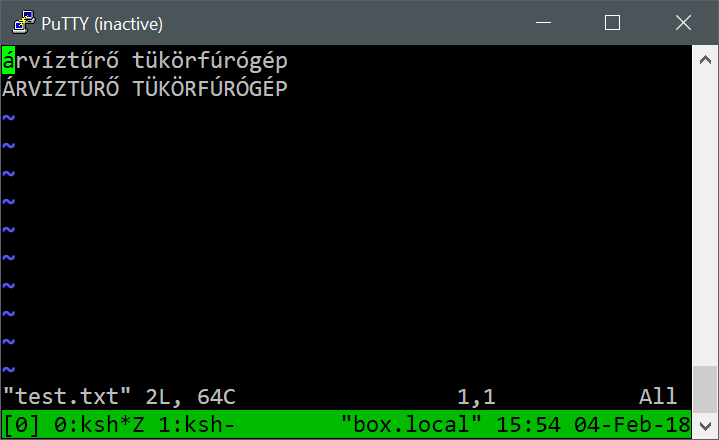 This was tested on OpenBSD-current (pre-6.3) with the base system's vi as well as with vim and nvi from ports. The picture shows Vim from OpenBSD ports (vim-8.0.1255p0-no_x11) running in PuTTY from a Windows host, but I tested it successfully in OpenBSD's FVWM with the standard xterm too. The locale is hu_HU.UTF-8 in the picture. Setting the locale to C gives the same result as you show in the question.

The correct locale could be set in your .xsession file (or .xinitrc, depending on whether you log in from xenodm or start X11 with startx on the console):

Note that the LC_ALL and/or LC_CTYPE variable needs to be exported.

Regarding uxterm: uxterm seems to have been removed after the release of OpenBSD 6.0.

There is, however, a port called rxvt-unicode which provides the urxvt utility.

The OpenBSD version of vi doesn't support UTF-8 yet. Vim will work fine but you need a terminal with support for UTF-8 and the correct locales. I don't remember how many locales includes OpenBSD, so try with en_US.UTF-8 as LC_CTYPE.

Not the answer you're looking for? Browse other questions tagged openbsd vi unicode or ask your own question.

2
OpenBSD 5.6 / fvwm2 / xterm missing UTF-8 support
3
Archive of old OpenBSD snapshots
3
OpenBSD 5.9 can't preload library ''
2
OpenBSD 6.1 not updating
0
IPFS on OpenBSD
2
How to follow OpenBSD current?
10
OpenBSD: How to follow -current?
2
I can not change the ciphers in OpenBSD 6.2 in httpd.conf
0
Dual boot OpenBSD with Mint