Terminal commands equivalent to NetworkManager's “Use as Hotspot” option 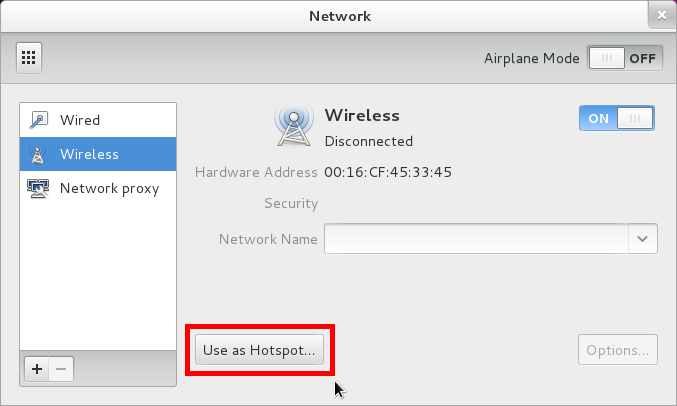 I want to recreate this functionality with terminal commands.

Below are two methods I tried to accomplish this but I havn't found a solution yet.

Method 1: iwconfig
Using research from accross the web, I tried the following command:

Method 1 Problem
Devices can see the SSID but are unable to connect. Running ip a reveals the following about wlan0:

Notice NO-CARRIER is present, and the state is DORMANT instead of UP.

Notice that RUNNING is missing as one of the flags.

Method 2: nmcli
If NetworkManager's "Use as Hotspot" button is pressed at least once on the system, /etc/sysconfig/network-scripts/ifcfg-Hotspot is created and I can use the following command to start a working hotspot:

Method 2 Problem
If the user has never pressed "Use as Hotspot" on NetworkManager before, nmcli con up id Hotspot won't work. I've looked at nm-connection-editor --create but couldn't find much information. I've also looked into manually creating /etc/sysconfig/network-scripts/ifcfg-Hotspot but this method does not seem elegant or extendible to other distributions.

I only changed the ssid and the psk properties to my needs. Then I restarted my computer because the command: sudo systemctl restart NetworkManager for network restart seems not to work correctly, because in the Network-Manager GUI I have no wireless network settings anymore and also the following command worked not before the restart. After restart you can use the nmcli command to start the access point.

YOUR_WIFI_INTERFACE you can find out with the command iwconfig.

There is a dedicated option in nmcli:

More info from the Manual:

A DHCP server was needed to assign IP addresses to wifi connections. I used dnsmasq, a DNS and DHCP server.

The following are the commands to start an ad-hoc wifi hotspot:

Not the answer you're looking for? Browse other questions tagged networking iptables wifi internet networkmanager or ask your own question.

6
Configure Atheros AR9285 wireless in Gentoo
3
Activating WiFi in Fedora
6
802.3ad on FreeBSD and Linux using crossover cables?
2
SSID of hostapd is not visible
0
How to implement iptables on lxc-container?