I am looking at which ports are open for a smtp host (this host is not mine), and I am seeing different outputs for each of two tools (MX toolbox port scan and nmap). The nmap scan shows that port 465 is open, but the MX toolbox is not showing 465 at all.

My questions: why would there be a discrepancy, which tool should I trust more, and is there a way to determine what is going on with this port that is causing it to only show for one tool? 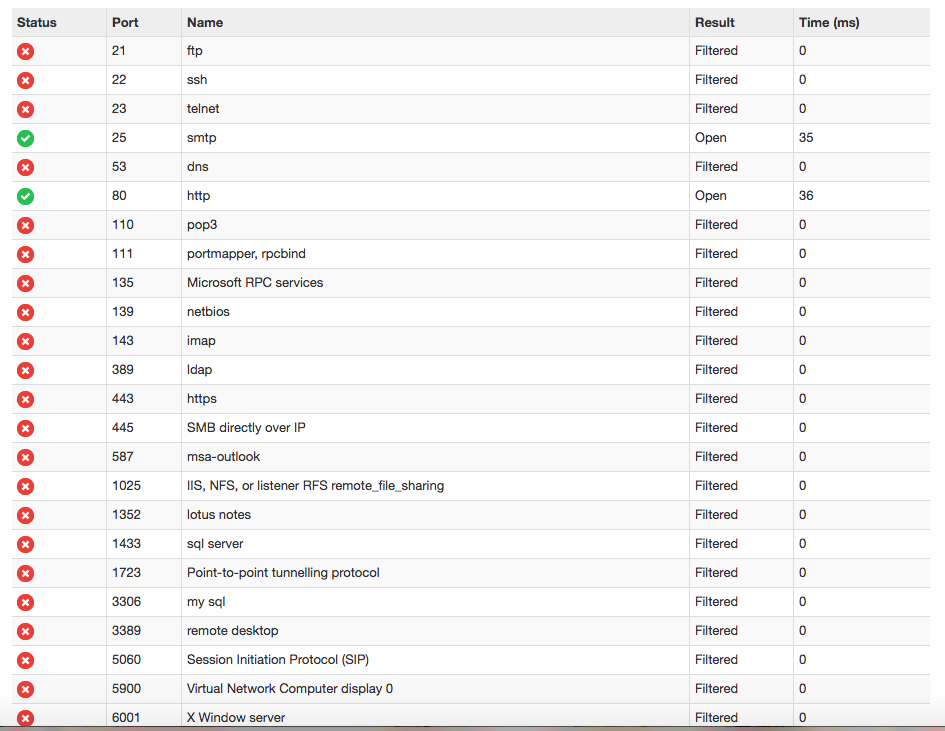 I am troubleshooting this for a customer who is trying to connect their email inbox to our software, so I removed their domain and IPs, but I can provide further information as necessary.

Well, let me explain for you what happen basically.

Basically while you scan the port with ping enabled while the other side filtering the port when it's receive SYN packet so the host gonna give fake response that the port already closed while it's actually open.

There's other configuration can be done that the port will report one time true response status for 1 time and on the second time will give fake response because it's already add your source ip to DENY section.

So the end of that point that you can trust nmap report since i believe that your ip is not flagged by the firewall before.

don't panic if you rerun the scan and got status of port as closed. i explained for you this before.

-Pn is option to skip ping while scanning the target ip. you could try with it.

also you can go with other method to configure another ip to receive the packet sent response, you need to look nmap manual for the options you need actually.

MX toolbox scan only some predefined standard ports. It's not scanning port 465 at all. So, you're not seeing that in MX toolbox output.

nmap is in your system and it's scanning all ports and services binded to them.

If mx toolbox says a port as filtered, then it's probably blocked by firewall. If it's saying closed then no service is listening to it. MX toolbox simply not scanning a non standard port doesn't imply anything.

There are several other websites where you can specify a particular port and scan. Google for 'Online Port Scanner' pick any one suitable and scan that particular port.

Not the answer you're looking for? Browse other questions tagged email smtp nmap or ask your own question.

4
Doing nmap on a network
3
Fastest way to port scan. NMAP?
4
Is this enough for a working mail server?
13
Nmap -sn: scan or no scan?
2
Can you send a TCP packet with RST flag set using IPTABLES as a way to trick NMAP into thinking a port is closed?
3
How to tell stateful vs stateless firewall with nmap ACK scan
3
nmap is exponentialy slow when scanning more ports
4
nmap raw packet privileges not working (“operation not permitted”, even as root)
0
How can I port scan a host from itself without using the loopback interface?
0
nmap scan for all ports vs scan for single port