I don't have any approved SD cards to perform tests with them.

The highest speeds are achieved for sequential read writes. So most likely the 80MBps apply to that. Speed testing applications usually mix up lots of tests, like random read writes, etc. This gives you an average performance figure.

The best example of this is car or bike fuel efficiency figures. Companies will give you the results under test conditions. But it'll never be the same as you get in day to day usage.

Speed is not indicative of authenticity. Your card is most likely the genuine thing.

But still, if you want then-

I would suggest you try AJA System Test

Here is a list of card testers using an android device.

Testing the speed of an internal card reader with Disks

In order to find the maximum throughput via the internal card reader the other components must be faster (the read/write process on both sides of the card reader, and in particular, the card. And I think the real card speed [which may differ from the nominal speed] can only be verified in a system with a card reader, that is not the bottleneck (for example an adapter via USB 3).

If using the internal card reader takes longer time, you can conclude that it is the bottleneck. 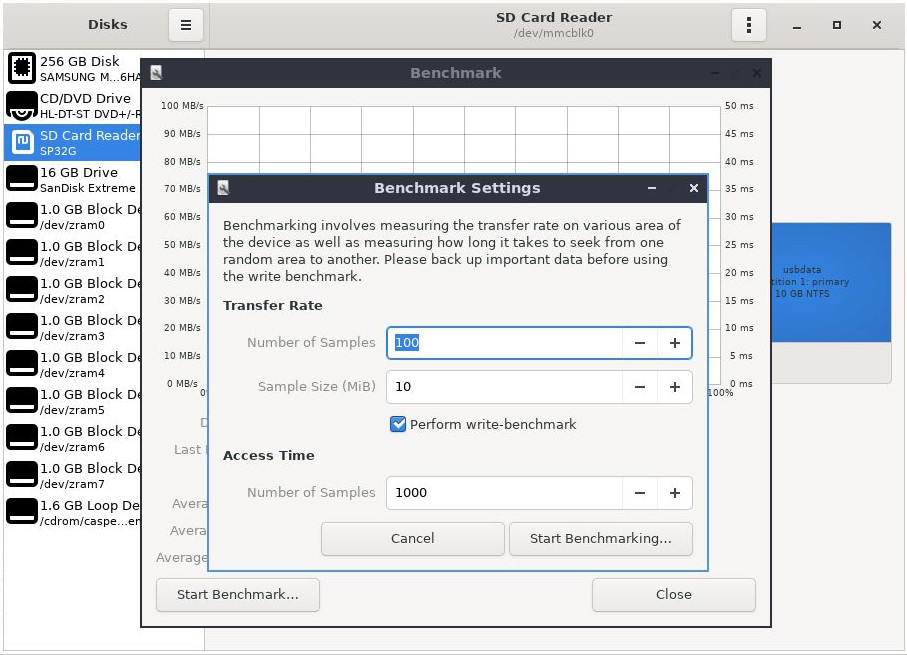 It is very important that you test not only what is the output from for example dd or pv, but you should measure the time of the read or write command including flushing the buffers. The following method should work in linux,

and then divide the amount of data written by the 'real' time to get the real speed.

You can use some standard test or design a test for your particular use case, which may rank combinations of hardware and software in a different way from the standard test.

For write tests it is important that reading or creating the input is not the bottleneck. Running in a live system with the data in RAM is one alternative. For read tests you can write to /dev/null.

To find the bottleneck you can try with different

Not the answer you're looking for? Browse other questions tagged block-device sd-card benchmark or ask your own question.