Can not see partitions in gparted after imaging iso

I have imaged 64Gb usb stick with kali linux iso as explained in official documentation.

Then I have created persistence partition with parted in accordance with official docs as well.

But even after doing this gparted shows the whole drive with no partitions: 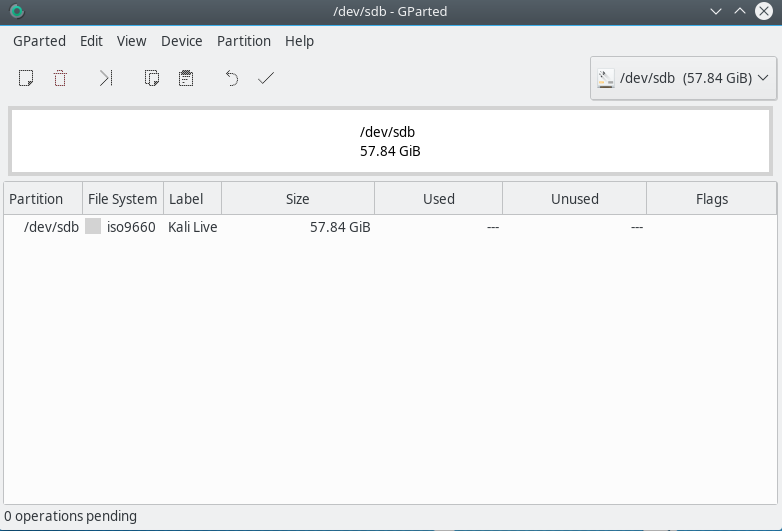 here is the lsblk output:

I want to use all remaining space as a normal ExFAT storage. What is the proper way to do it?

Please see gparted not detecting USB drive partitions in Fedora 27 only for explanation from gparted developer. I had similar issue and asked that.

Latter I found newer versions of the software have this issue. So you may uninstall the current version gparted installed. Download source code of gparted 25 compile and use that. I'm using gparted 25 and it's working fine with the situation you're mentioned.

NOTE You may need to run gparted 25 as root from Terminal only. If you want to launch it from GUI edit menu button corresponding to the software, pick run in terminal option and append sudo before starting command.

After imaging iso using dd the USB drive has multiple partition tables at the beginning of the disk.

gparted versions below v0.28 have ISO Partition Map Bugs and the bug fix resulted in another issue stated above.

So using old versions of gparted (before v0.28), for example v0.25, will fix this problem. But there is a better way to do it.

Then see all partition tables with wipefs /dev/sdb 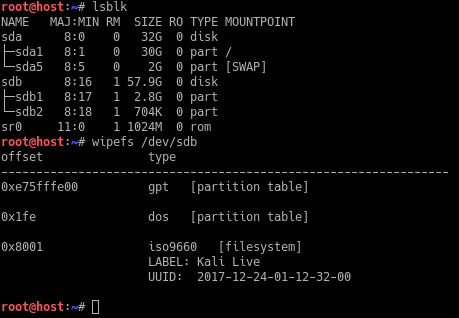 As we can see there are two other partition table signatures in the beginning of the drive: gpt and dos (I guess it is the same as mbr)

This will surgically write zeros over 5 bytes of the ISO signature without touching the GPT (Or at least that is what this post says...)

Now run gparted /dev/sdb and see the result as expected: 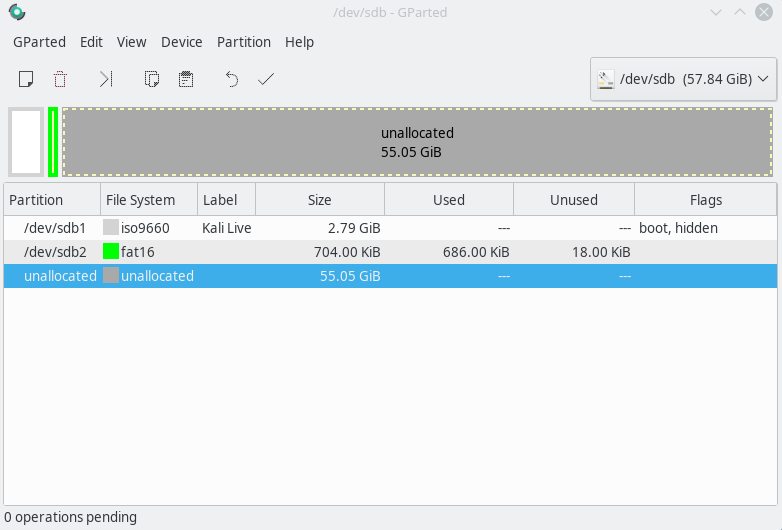 Best to do this from whichever distro you used to create the live usb from and not from within the live boot of Kali since the persistence partition contains any updates or packages you may have installed.

Since the dd'copies the iso image to the usb it also copies the signature that your system needs to identify this as an iso image and boot appropriately. Without this information it won't boot, as you have found.

Although you modified the partition table when you created /dev/sdb3 and you can detect and mount the persistence FS you created gparted sees this as a single iso volume for the reasons given here.

The behaviour to report whole disk file systems before partition tables was changed in GParted 0.28.0 as part of bug 771244. This was so that kernel reported partitions embedded within ISO images on whole disks aren't displayed so the user doesn't try to manipulate those ISO embedded partitions, which is impossible.

Not the answer you're looking for? Browse other questions tagged partition kali-linux live-usb iso gparted or ask your own question.

0
gparted not detecting USB drive partitions in Fedora 27 only

2
SliTaz, usb stick, unable to mount iso or to find a filesystem on it rootfs.gz
2
How to install Kali linux on to a specific (existing) partition on a USB stick
1
Kali linux throws ' isolinux.bin missing or corrupt ' error using USB 3.0
0
I know a partition exists (bootable) but I can't find it in fdisk