I can add and connect the bluetooth speaker in Linux (UE BOOM speaker; some details in this answer here). At that point it is paired and trusted and works perfectly.

The problem is that after almost every logout and after every restart the bluetooth speaker is absent in the list of output devices that can be selected in pavucontrol or in a panel applet that I have installed in this Mint Xfce.

The same happens if the speaker was disconnected and used by another machine or a phone.

In rare cases the device is marked as "soft blocked" in sudo rfkill list. In such cases I can unblock it with sudo rfkill unblock bluetooth, which sometimes is enough, but in most of those cases is not enough (I have to connect it manually). But in most of all cases (that is: when the device is seen but not connecting), it is not blocked.

What works in all cases

(but that I would like to avoid doing after each restart/login):

Therefore, there seem to be two issues here, that may or may not happen on the same occasion:

This problem is not Ubuntu, Xfce or kernel specific, I have seen it in the same terms in Ubuntu Gnome, KDE-neon, and in Solus (Gnome and Budgie).

Systems where I encountered this problem:

Before anything else: be sure there no other devices like smartphones or laptops are connecting to the same USB external device.

I think it is normal to mention under this question the practical solution that I have found - or more correctly the practical circumstance under which the problem has vanished - and that may shed some light on what the problem really is (or is not).

Once added and connected, the speaker bluetooth device is remembered and is automatically connected if powered on without previous or further ado.

It only needs to be selected in the sound settings. 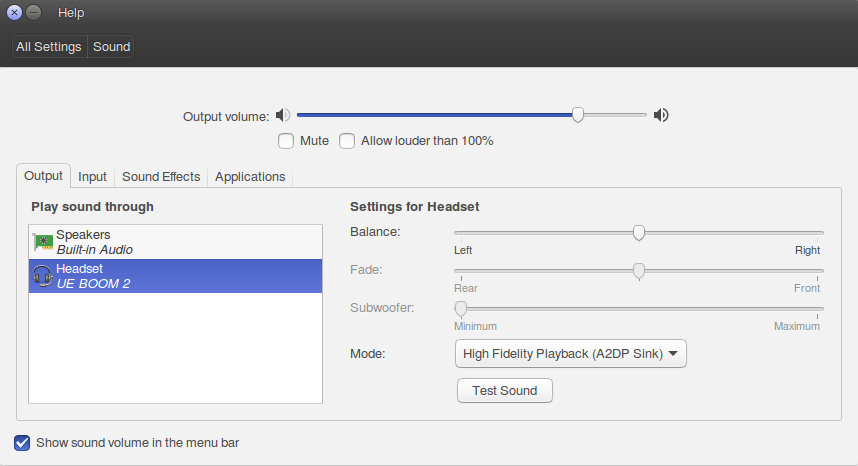 That's that, I don't know what to conclude, except that the most central distributions are recommendable in critical cases.

UPDATE ~ Other systems that are not affected by this problem:

What works on systems where this problem appears:

If that doesn't work to unblock (or even in any case) it might be a good idea to do:

(as indicated here; the first command will ask for password multiple times)

The UE BOOM2 device can be reset with a long push at the same time on the power button and the down volume button (until a sound is heard and the device shuts down), which may be helpful in combination with the above.

Having experienced the same problem as OP, I believe that this is the cause to the problem... For whatever reason, Bluez attempts to connect to the speaker using LE instead of BR/EDR (normal bluetooth) and immediately fails. The log messages usually relate to GATT and as additional evidence, when a device is powered-down it will still attempt to connect but not return the expected 'host is down' message because LE is always-on and available. It doesn't actually connect to the audio sink and most of the time reports 'resource unavailable'.

So... During the pairing process, a configuration file records that the device supports LE. To solve the problem, I simply removed this support attribute. I haven't had a connection problem since (except when the speaker is already connected to my phone, but that is another issue) even when rebooting or logging off.

After you've paired the speaker. Turn off bluetooth with:

Open the file in an editor (nano/vim) as root:

If you don't know your bluetooth-adapter mac address or the speaker-mac-address then running sudo grep -rnw '/var/lib/bluetooth/' -e 'UE' should give you a hint. If you renamed your speaker, then replace the string 'UE' with the name.

In this file you should see the line:

Save the file. Make sure the speaker is turned off. Enable bluetooth Preferably, restart your computer - but restarting the bluetooth service would probably work:

Now it should never connect using LE again, even on reboot & logoff. If you re-pair the device for whatever reason, then this change is lost. Give it ago, I hope it also works for anyone looking a solution to this problem...

An alternative to try and which I used before I made the change using the file above but much less efficient solution is disabling LE on the adapter using the command: sudo btmgmt le off - which had the same outcome.