Drop packets with PREROUTING in iptables

The filter table is best place to drop packets, agreed.

But, out of the box, Docker bypasses INPUT filter rules with PREROUTING to its own FORWARD rules making Docker containers world-accessible. Inserting DOCKER-named filter INPUT/FORWARD rules fails because when Docker is restarted they are deleted then inserted (not appended).

My best attempt is to insert another PREROUTING chain before Docker's and send unwanted packets from eth0 (WAN) to a black hole - 0.0.0.1 - because you cannot DROP/REJECT in a nat table anymore.

Here are what the NAT chains looks like with Docker and one container running: 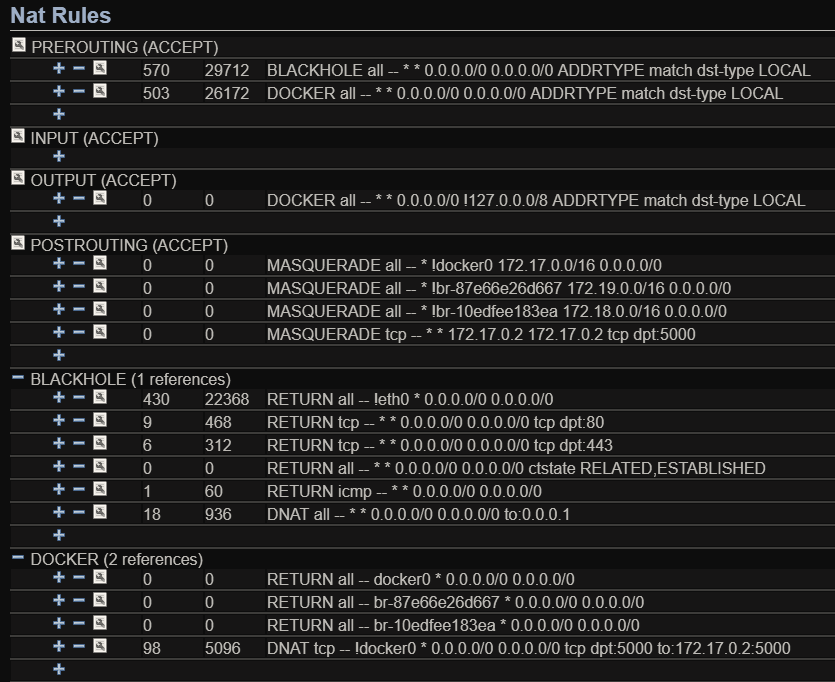 This seems to work well, though, is there a way to explicitly reject packets before reaching the other pre-routing rule?

I had a similar problem which was the need to "harden" network traffic even if somebody would deploy a container that was binding the application to any address: 0.0.0.0:port.

Docker provides a DOCKER-USER filter chain but it looks like all the magic happens in the DOCKER nat chain that is referenced in PREROUTING.

So no way around this nat happens before filtering and I don't want to touch too much at the docker rules.

I don't like the idea of having to change the packet once again so I came up with a scheme that returns everything by default and jumps to another chain in the PREROUTING before DOCKER gets called.

I then selectively jump back to DOCKER when I consider the traffic good.

The packet will jump to the DOCKER-BLOCK chain, and if that chain is empty, it'll go out the chain and continue on PREROUTING jumping to RETURN and it'll be blocked.

When you enable a port:

It'll make the packet jump back to the DOCKER chain where it is managed by docker. Docker should handle the packet and the RETURN from PREROUTING should never be reached.

The nice way about it is that you never have to touch to the PREROUTING table anymore, if you want to flush, flush directly DOCKER-BLOCK.

The issue with the DOCKER-BLOCK approach is that if you want to block traffic to the host & containers, e.g block tcp port 50, you need to add it in the DOCKER-BLOCK chain (to bypass docker rules) and in the INPUT chain (to perform the actual drop).