Kali dual boot not working without plugged in usb stick

I just managed to install a dual boot for Kali Linux and Windows 7. So I can choose to start from my secondary disk, where GRUB finds place, can chooce Kali and everything works fine. The problem: It's only working fine, when a USB-Stick is inserted. I know it sounds weird, but its true...

I installed Kali with a image burned to USB-stick with Rufus. Install progress went fine, no problems at all, but now, I can only start Kali when "A" usb stick is inserted, I don't say when "THE" usb stick is inserted, it can be ANY usb stick, I completely formatted the usb stick, I tried another one, it doesn't mind, it just has to be one and exactly one usb stick inserted (if I plug in a second one, it's again not working), the error I get says something like sdb3 not found. And I already got behind the problem. Kali always mounts the USB-Stick to sda, the partition with Kali partitions on is sdb and another partition on another disk is on sdc (doesn't mind for Kali). Now I guess, that Kali tries to find the partition under sdb3, but if my usb-stick is not plugged in, it would be sda3.

I hope you understand what I mean. 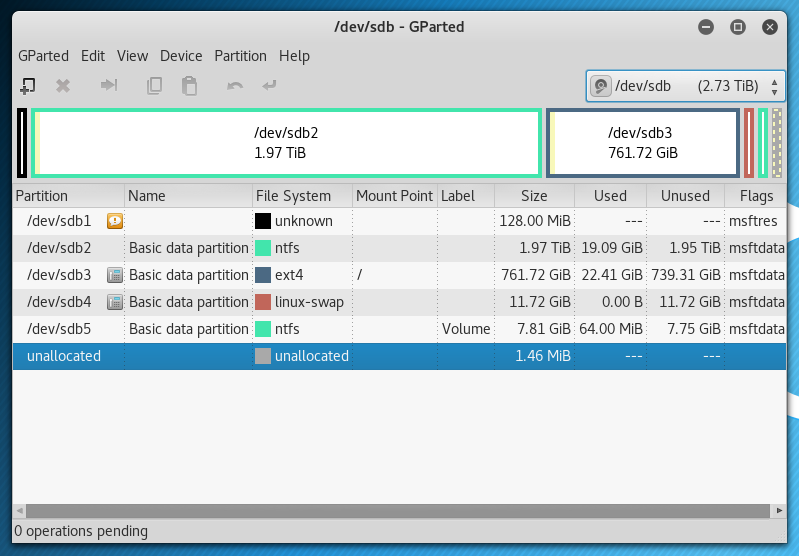 This is a picture of the sdb disk.

So again, it seems, that Kali always tries to boot from sdb, but as I plug in the usb-stick, sdb is something different then without the usb-stick.

How can I change this? I'm really wondering why it's referencing on the identifier sdb instead of really referencing to the disk itself.

So what can I do against this, so I don't have to start with a usb-stick inserted?

Edit: The output of lsblk is the following: 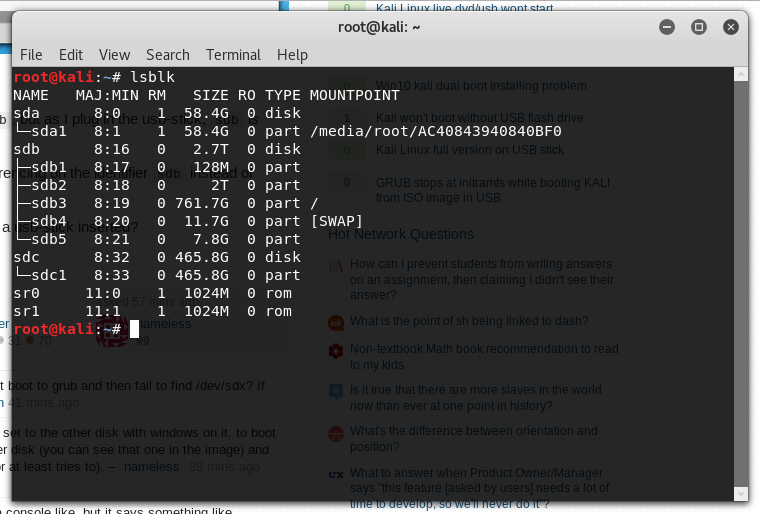 And honestly I'm a bit confused about the thing behind sda1, because I completely formatted that device... 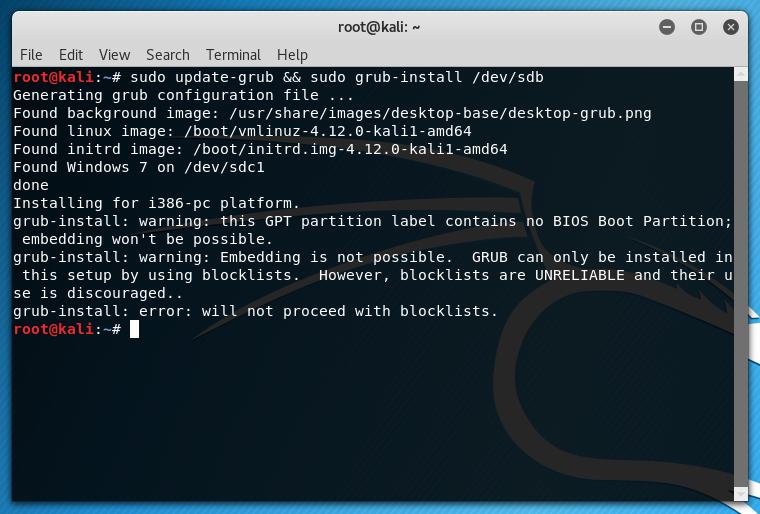 Summary: 2 Hardrives. One with gpt-schema the 2. with ms-dos.

When you install in bios-mode on a hardrive that has a gpt partition table und you will install grub on this, you need to create a so called BIOS-Boot partition

Another oppertunity is to install grub in the 2. drive, there is also your bootloader from windows; and make this drive in bios as first bootmedium.

Despite the fact that you have to press F11 to get the grub menu it seems that grub is installed on your windows drive (since you can boot to grub with any other non-bootable USB and the windows disc is the only one with a boot flag set).

You can verify the location of grub with the help of ghulselmans script.

To boot into kali without the usb plugged in, drop to the grub shell from the grub menu (press c when the grub menu shows) and proceed pretty much as is described here.

From your info, and assuming that without the usb plugged in your kali install is on sda3, called (hd0,3) by grub, the boot sequence from grub shell will be

Once you are successfully in, check that /etc/default/grub/config policy does not prevent use of UUID, as described here then reinstall grub. It will probably only allow installation on your bootable windows drive (which will now be sdb without any usb plugged).

and check whether grub.cfg is using UUID or not. If it isn't then, as you already noted, you need to correct this to avoid problems booting if you have a usb plugged in later.

To avoid breaking the new grub install by editing working entries, it will be better to add a new UUID configured menu entry to grub.cfg.

First get the UUID for sda3 from

Then copy the contents of the existing grub menu item for Kali into a new grub menu item and edit it to replace /dev/sda3 with its UUID equivalent. I use grub-customizer for these edits and there are probably other tools but editing grub.cfg by hand is not recommended.

Reboot and test it. If it fails then boot back in to Kali via your unedited (top of the menu?) grub entry and check your syntax in the grub manual

And one last thing.

and then when your kernel updates and modifies the links your menu entry will pick up the new kernel.

Not the answer you're looking for? Browse other questions tagged kali-linux usb dual-boot grub or ask your own question.

1
How to add Puppy Linux to grub menu installed by Ubuntu?
0
Kali Linux fully installed usb boot vs live persistence usb boot
1
Kali Linux (old install) will not boot
0
Saving AND dual-booting Kali from USB
1
Plugged USB stick into macbook and all data was wiped
2
How to attest that my USB hard disk is really defective or not?