Which installed software packages use the most disk space on Debian?

Disk space on my root partition is running low, so I want to delete some applications from the system. How can I see which software packages use the most disk space? Is it possible to view that from aptitude?

I know about generic disk space analyzers like df or baobab, but I need solutions for installed applications.

The easiest way (without installing extra packages) is:

Unfortunately on at least some systems, this list includes packages that have been removed but not purged. All such packages can be purged by running:

Or if you don't want to purge uninstalled packages you can use this variant to filter out the packages which aren't in the 'installed' state from the list:

The easiest way is to run wajig large. The package should be an apt install-away.

Here's two links for other ways of doing it:

Also remember that the installed size is just part of the space taken up by packages. The compressed version is probably still in the cache, and that takes up some space too. You can remove those with apt-get clean.

Since you want to see which [installed] software packages use the most disk space[,] from aptitude ... of course you can use aptitude! via either its CLI or {interactive, TUI, non-CLI} awesomeness. Let's discuss the CLI first, then the TUI. Either way, you just need to know the

so let's break that down:

Note that, if you don't see changes in your output field, you probably need to set --width.

... and you can also do this sort of thing in the {interactive, TUI} aptitude. E.g., to set display format preference,

To limit search to installed packages in the interactive aptitude,

To sort on installed size in the interactive aptitude,

In case you don't want to install wajig. I imagine everybody has debian-goodies installed:

First of all, use a tool like baobab (sudo apt-get install baobab) to show you where that space is being used: 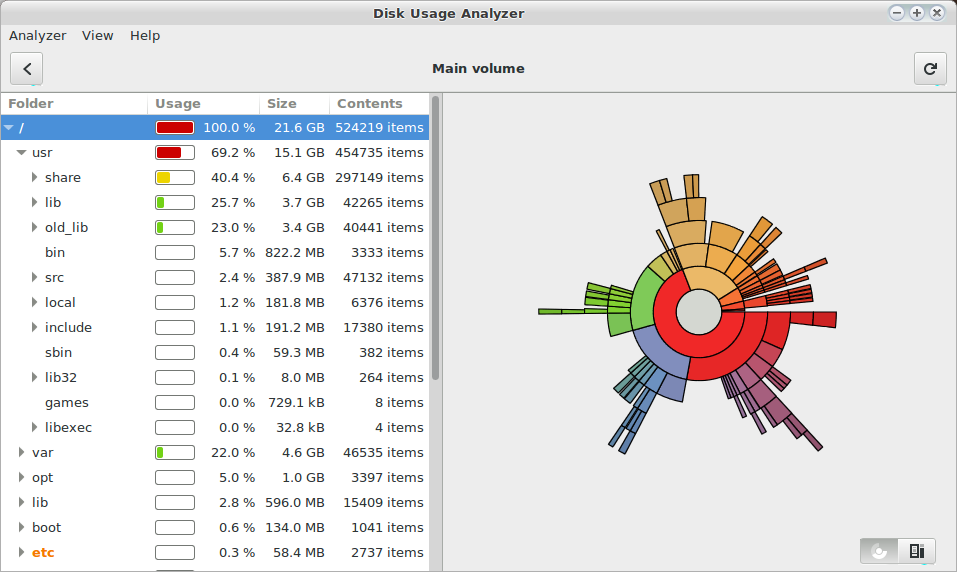 That will give you a nice graphical overview and help you narrow down what is taking up your space. You can also get this information on the command line using du:

Pass this through sort (assuming GNU sort, whicih should be the case in Debian) to sort by directory size:

As a next step, you can see how much space a particular package is using with this command:

On my system, for example, removing all texlive packages will free 1,502 MB:

Finally, you can get this information for all installed packages with this command:

You can use the wajig package, and the command

The help explains what this does.

to add to other answers, if you like command line you can use good old durep

You can probably free up space using localepurge

Finally, you can probably get rid of icons and fonts that sometimes can take a lot of space. See details at this website

Adding a few more tools to the list, I've always used debfoster and deborphan on my systems. They're most useful for hunting old dependencies that are hanging around after upgrades.

apt-get autoremove is great, but doesn't get everything and since it follows the installation marks, it doesn't quite always know what you wish to keep. Using apt-mark lets you direct it to some extent, though.

While this is a nice collection of tools, to which I'd add the KDE / QT Filelight, which is similar to other gui disk space usage tools, it's not the literal answer to the topic title.

If you take the question of this thread literally, that is, what are the largest packages in your system, as a rule, they are:

The libreoffice suite of packages, which isn't a single package, but it's really big.

The linux kernel and associated header packages comes I think second, and if you have multiple kernels installed, which most systems tend to have, each one is around I think 135 mB disk space, roughly, gets bigger every year, but it's about that big. If you use non free video drivers there would be the associated driver packages/files as well. Note that as with libreoffice, each kernel actually can actually be made up of 2 or 3 packages, the image, header, and driver packages, so a literal per package size count isn't actually that accurate except to get a crude sense.

After those, there aren't a huge number of massive packages in Debian's package pool that I'm aware of.

I find that once the root partition starts getting big enough to where you start wondering how to get rid of packages to shrink it, it's generally time to move/resize to a bigger root partition.

apt-get clean of course is the first thing to run, to get rid of all the cached .deb files, but once you remove that, and all but say 2 kernels, if you're still stuck with not enough room, it's more practical to increase the partition size since the cleanups etc just are red flags you are running close to out of root partition space, which can be a real problem if apt doesn't have enough room in /var to actually download and extract packages for an upgrade. Cleaning out by purge actions leftover config files from removed packages won't do you any good at all in terms of regaining disk space since they are tiny, but it is nice to do now and then just to clean up cruft, but it shouldn't be mistaken for actually regaining any meaningful disk space.

apt-get auto-remove isn't bad either, but be aware that it's sometimes wrong about the package being removed, so you want to check that list carefully before you let apt remove the stuff. Technically it's better to purge that list, that way you get rid of the config files as well at the same time, remove or auto-remove will I believe leave them in place.

3
How can I know how much space software takes?
0
Get how much space is used by some packages
4
Sort installed applications according by usage frequency?
0
How to install apt packages to SD card

0
Fedora "disk full", df, du (gui) confirm but gparted shows the partition is big enough
0
Why does my system count /media for disk space?
2
debian unstable and apt upgrade policies with installed experimental packages
2
where does apt or dpkg store the list of installed packages?
1
What's a reliable way to check which files and directories have recently taken up disk space of the root partition?
1
root partition runs out of space
1
Low disk space “apt/archives”
1
Cannot find the files filling up my /var partition