Invoking the task switcher (I use <Alt-Tab>) prompts a (very distracting) message box:

If I release <Alt-Tab>, but then activate it shortly after, it will continue to grow, as such: 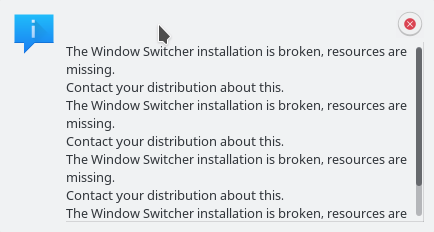 I'm running Debian 9.2, e.g. Stretch, on a HP Probook 6450b. None of the base switcher effects works, and neither does the downloadable ones I've tried. The switching itself works, there's just no effect, or preview of any windows, it just switches instantaneously.

The window switcher installation is broken, resources are missing

It seems you downloaded some theme or custom task switcher that is not compatible with your current version.

I had same problem and fixed it selecting a working theme, then restarting (or relogging), using following command :

In systemsettings5, go to workspace->window management->task switcher. Here, under "Visualisation", try choosing something different from the drop-down (for example, I had the problem you describe when "Cover switch" was selected). Click Apply in the lower right corner. Then, bring up the run dialog (alt+f2 unless you changed the hotkey) and enter kwin_x11 --replace, followed by ENTER. "Breeze Dark" instead of "Cover switch" worked for me, fwiw.

It may happen because of broken switch layout/theme (like "compact" one). Try to delete all downloaded theme, choose one from default list and restart kwin (or reboot system).

Not the answer you're looking for? Browse other questions tagged kde kde5 plasma5 or ask your own question.

1
Stop KDE from unmaximizing the window on dragging movement starting close to the window border
4
What commands are needed in the '~/.vnc/xstartup' file to run KDE Plasma 5 in VNC?
0
What are all possible values for the 'Type=' option in a .desktop service file in KDE/Dolphin's?
3
What are the system requirements for KDE?
5
Where are the KDE Plasmashell logs?
3
KDE Plasma: window drop shadows/transparencies broken
1
Problems with KDE Plasma after upgrading to Debian 10: too bright and glowy, favorites and panel icons are missing
0
How to take screenshot of KDE task switcher?