How to fix non-responsive Ubuntu system?

I use Ubuntu. Sometimes, the system does not have any response with mouse and keyboard. Is there any way to solve this problem except hitting the reset button on the machine?

If you want a way to reboot, without saving open documents, but without hitting the reset button, then there are ways that are less likely to cause data loss. First, try Ctrl+Alt+F1. That should bring you to a virtual console, as ixtmixilix said. Once you're in a virtual console, Ctrl+Alt+Delete will shut down and reboot the machine.

As for fixing the problem without rebooting, without more information about what is going on, it would be difficult to give a good answer. If you could describe the circumstances under which this occurs (the best way to do that is to edit your question to add the information), then that may help people to give good answers. The other thing to consider is that, if your computer is becoming unresponsive--especially if it takes more than a a few seconds for Ctrl+Alt+F1 to bring up a virtual console--then you almost certainly have a bug, and by reporting it you can both help the community and maybe get an answer.

This might be happening due to an interaction between an application and a window manager--or the X11 server or Wayland. A sign that this is the nature of the problem is if an application stops responding and prevents you from entering input with the keyboard or mouse to other application windows. (No application should be able to do this; some GUI component must have a bug in it for this to occur.) If that's what's happening, then you can kill the offending process in a virtual console (as ixtmixilix alluded to):

(By the way, kill -KILL is the same as the widely popular kill -9. I recommend kill -KILL because SIGKILL is not guaranteed to have 9 as its signal number on all platforms. It works on x86, but that doesn't mean it will necessarily work everywhere. In this way, kill -KILL is more likely to successfully end the process than kill -9. But they're equivalent on x86, so feel free to use it there if you like.)

If a process runs at or very near the highest possible priority (or to state it more properly, at or near the lowest possible niceness), it could potentially render your graphical user interface completely, or near-completely, unresponsive. However, in this situation, you would likely not be able to switch to a virtual console and run commands (or maybe even reboot).

If a process or a combination of processes running at normal or moderately elevated priority are slowing your machine down, you should be able to kill them using the technique in the section above. But if they are graphical programs, you can likely also kill them by clicking the close button on their windows--the desktop environment will give you the option to kill them if they are not responding. If this doesn't work, of course you can (almost) always kill them with kill -KILL.

Buggy I/O can cause prolonged (even perpetual) unresponsiveness. This can be due to a kernel bug and/or buggy drivers. A partial workaround is to avoid heavy and simultaneous read and/or write operations (for example, don't copy two big files at once, in two simultaneous copy processes; don't copy a big file while watching an HD video or installing an OS in a virtual machine).

This is obviously unsatisfactory and the real solution is to find the problem and report it. Unless you're running a mainline kernel from kernel.org, kernel bugs should be reported against the package linux in Ubuntu (since Ubuntu gives special kernel builds that integrate distro-specific patches, and bug reports not confirmed against a mainline kernel will be rejected at kernel.org). You should do this by running ubuntu-bug linux (or apport-cli linux) on the affected machine. See the Ubuntu bug reporting documentation first; it explains how to do this properly.

Some GUI lockups can be caused by graphics card problems. There are a few things you can try, to alleviate this:

Hopefully the information above has conveyed some general information about what could be causing this kind of problem. It should also serve to illuminate what kind of information might be useful for you to add to your question (depending on the specific details of the problem), to make it possible to get an even better answer. (Or to improve this answer with additional information specific to your situation.)

Yes, the easiest way to archieve this, is enable the keys to kill Xorg server, and re-launch X session.

To enable this, open System Settings -> Keyboard Layout options (or use keyboard command in Unity interface, hit AltF2), and check this option: 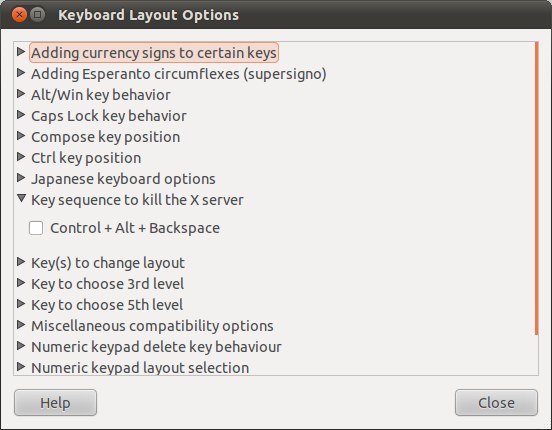 So when it hangs, hit CtrlAltBackspace will kill X server, and lightdm will re-launch login interface

I have faced this problem before, it was because I have missed up with some gnome shell extensions.

I simply did a factory reset to reset settings and remove all tweaks hence, everything worked pretty well.

In the terminal just write those two commands:

If you can't use any shortcuts and can't open the terminal (just like my case) , you can open it from the boot menu:

This will remove all the tweaks and custom settings

Not the answer you're looking for? Browse other questions tagged linux ubuntu command-line freeze or ask your own question.

1
Ubuntu mouse is moving but not clicking

5
System freezes. Can't find anything in the logs
3
Ubuntu 12.04 Gnome 3 "freezes" randomly - not a normal freeze though
6
chrome freezes Ubuntu 13.04
0
Linux sometimes hangs when it attempts to go into sleep/suspend