How to force "sips" to adopt white as 0 when creating a 1-bit black and white TIFF image?

I have a 1-bit black and white uncompressed TIFF image. The following sips command compresses it with LZW compression.

However, the resultant TIFF image has black and white inverted when displayed on a certain viewer. This inversion is related to "Photometric Interpretation" as explained below.

Black and white is inverted because the viewer prefers white to be 0, while sips uses white as 1 when generating the TIFF image.

To check whether white is 0 or 1 (or whether 0 is white or black), that is, whether "Photometric Interpretation" is 0 or 1, at least the following two methods are available.

Use exiftool, which can be obtained from http://owl.phy.queensu.ca/~phil/exiftool/

Or use Preview.app on Mac OS X.

My question: How can sips be forced to use white as 0 when creating a 1-bit black and white TIFF image?

As I said, I have a 1-bit black and white uncompressed TIFF image. In fact, I have thousands of this kind. Thus, instead of manually processing them on GIMP or Photoshop, I need a command-line tool to automate the process.

(My default shell is bash.)

Meanwhile, I will wait to see whether sips can.

As a sample image, I am trying to upload a 1-bit black and white uncompressed TIFF image, which consists of black letters on white background, and whose Photometric Interpretation is 0 (WhiteIsZero). However, the image-uploading mechanism at stackexchange automatically converts TIFF into PNG. 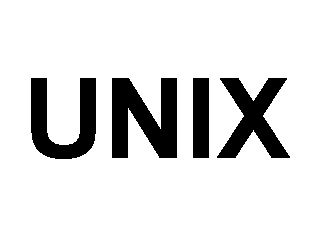 Probably most people will recommend that you use ImageMagick, which I understand is available for Mac OS X. On Linux I used it as follows to generate a tiff image similar to the one in your question, and to manipulate it to provide a compressed version with the Photometric option. Create the initial image:

Compress and change the colours with -negate or the Photometric with -define quantum:... as needed:

Not the answer you're looking for? Browse other questions tagged osx images bsd or ask your own question.

1
How can I force LXDE to have a transparent background when connecting with X/X11?
5
Mac OS X partition type problem
2
How to force drop all partitions and erase disk from terminal?
6
How do I make BSD seq not output + and e when using large numbers?
0
How to view a pdf file and an image file remotely from terminal?
1
Why this black box and how to remove it
1
Invalid MIT-MAGIC-COOKIE-1 key% WIDGET_CONTROL: Unable to connect to X Windows display: localhost:11.0