I already tried to install Ubuntu and Mint on my tablet and it almost worked, I just had problems getting auto rotation to work.

The main problem is that there appear some kind of striations, e.g. at boot, Ubuntu displays the "Ubuntu" logo and first it looks okay, but like every second there appears a blurred "Ubuntu" .5 inch lower and if it reaches the bottom, it continues on top until it looks like some kind of spacey wheel stamp.

The same problem appears if Ubuntu is running, but here it happens with every point on the display where the color is white and I have no idea where it comes from.

I already read somewhere it might be because of the bios/uefi version, but I already tried other versions. I currently run on 1HCN42WW and already tried 1HCN30WW and also 1HCN33WW

Has anyone experienced similar things with a tablet or does someone have an idea what could cause this strange graphical behavior?

Could the lack of a graphics card be a problem? Whereas I think theres something like an onboard graphics on the intel chip, but I'm not sure.

that's what it looks like after I tried Ubuntu, the desktop of the os also looks similarly messed up: 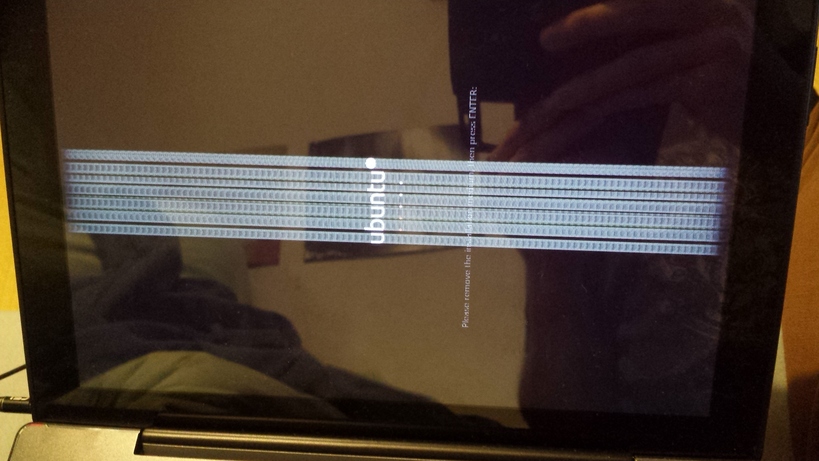 Browse other questions tagged linux ubuntu touch-screen tablet or ask your own question.

1
more than 8 outputs detected -- how to solve?
2
Instaling Linux on a machine with Asrock Z87 Extreme 6
2
Working with an Intel and Nvidia graphics card on linux mint
2
Simulate graphics tablet using libevent
0
Is there a way to boot Linux on the onboard graphics, and Windows on my Graphics Card?
0
Graphics artifacts when using Ubuntu