How to create a symlink which opens (literally) the target file

Suppose I have a file bar.txt inside directory foo and create a symlink baz.txt to foo/bar.txt. Like:

If I open baz.txt my editor will think baz.txt is opened in directory .. Is there a way to create a link such that rather bar.txt is (literally) opened?

Context (or why I'm trying to do this): I have a directory with a large collection of files which I index and comment inside an .odt file which remains in the same directory. In this .odt file I create hyperlinks to the indexed files in the directory, so that I can easily access the individual files with (much) more context than just the filename. I set LibreOffice to save the hyperlinks as relative paths, so that these links will work in all of my computers, which not always have the same directory tree to my user files.

I'd like to create a symlink (or equivalent) to this .odt file, but (in the terms of the above example) if the link opens baz.txt then relative paths (from the point of view of LibreOffice) will be wrong. The formerly created hyperlinks will not work, and if I happen to create an hyperlink in baz.txt (figuratively, of course) it won't work in the original bar.txt.

No. But you can create a libreoffice wrapper that'll take each argument that is a symlink and turn it into $(readlink -f $the_symlink). You can then set your file manager to open libreoffice files through that wrapper.

Now if you chmod +x lowrapper, put it in some directory of your PATH, and then change the handler program of your libreoffice files from libreoffice to lowrapper, then libreoffice will be opening the link targets instead of the links.

You can't, but what you can do instead is create symlinks to your "foo" directory like so:

I don't think there's any way to do exactly what you're asking for. Symlinks are file system constructs. However, there might be a decent workaround if you create a little script that opens the link target instead of the link:

Save that in your PATH, for example as ~/bin/openLink.sh and make it executable:

Now, open your file manager (you mentioned caja), right click on an .odt file and choose "Open With" => "Other Application": 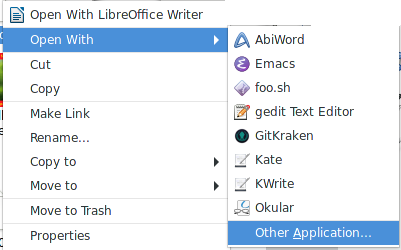 Click on the "Use a custom command" and put your script there: 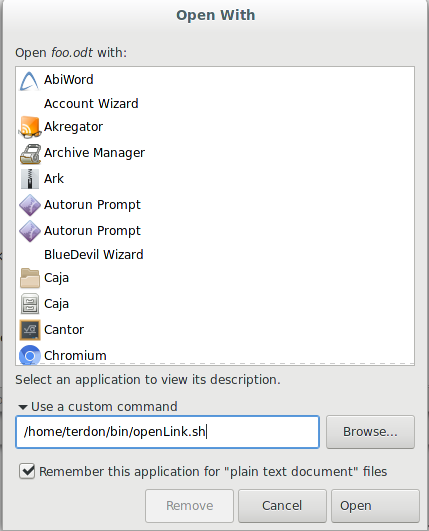 Finally, close everything. Now, each time you click on an .odt file, it will be opened using that wrapper so it should open all links in their target directory. Note that readlink -f on a regular file just returns the name of the file, so this will also work for non-links.

I've ended up following a somewhat different approach, of creating a new file type -- let's call it "sim(ulated)link" -- which contains the (relative) path of file to be open, and then created a script do deal with it.

"odl" for "OpenDocument Link". The contents of "foo.odl" being:

You can then create the following script to open *.odl (adapted from terdon's answer):

(In case you don't want to use readlink because it will follow the link in case the path thus specified is a symlink, you could simply go with:)

You can then associate this script with .odl files in your file manager (as explained in terdon's answer). Eventually, you will have to create a mime type for .odl files and associate it with the script (lacking this step in my case worked, but associated all plain text files with the script, which was clearly undesirable).

Why have I preferred this alternative to the ones provided by PSkocik and terdon, even though they work perfectly fine? For three reasons:

Caveats: I think this will only work for a well formed, non redundant, relative path given in the .odl file. There is probably a way to do things more robustly in the sense that it would work also with an absolute path or with a relative path with some redundancy in it.

Not the answer you're looking for? Browse other questions tagged symlink libreoffice or ask your own question.

115
Create a symbolic link relative to the current directory
14
Is symlink's target relative to the destination's parent directory and if so, why?
1
Seemingly Inconsistent Behavior for "ln" & "ln -s"
3
How to create a relative symlink which works across PC
2
understand the designation of symbolic links
1
Symlink files to mirrored directory tree
3
Symlink to file which does not exist yet
7
Looking for tested utility to get the absolute path to a relative symlink target
1
unlink/rm target of an open symlink
0
Symlink Source Target confusion