bash script not running at startup

I have created a simple bash script called echo.sh. Which outputs a string. I've made sure its executable. And i then added it to the "startup applications" program through the GUI interface. However when i reboot my machine, it doesn't appear to of been executed, as there is no echo appearing in a terminal.

Adding to "startup applications with correct directory to file" 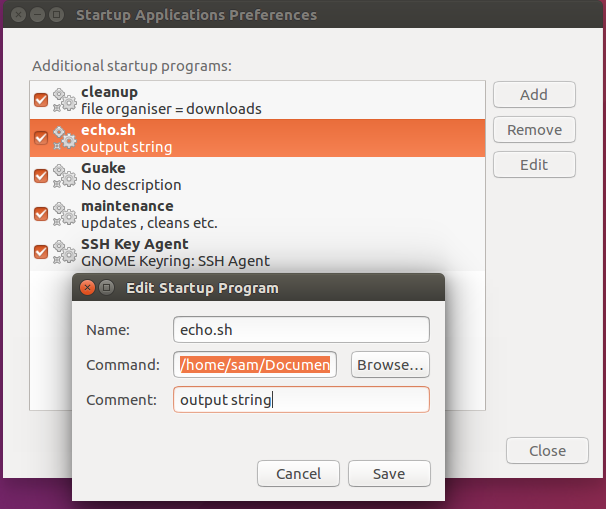 However when i reboot the system, the script doesn't run as expected, and no terminal appears with the echo message. I'm unsure as to why, and i may be completely missing the point, if so please let me know.

just to note, all my other bash scripts work , such as my "cleanup.sh" script which is also in the "startup applications" program.

I've tried redirecting the STDOUT to the terminal file /dev/tty. However this doesn't seem to work.

I've also tested a bash script with just a simple rm command, just to check if it was just the echo command that was having a problem. However when added to start up applications or .bashrc file, it doesn't delete the test.txt in the same directory as the script. However works when i execute manually from the terminal.

The script probably works, but the STDOUT of the script (wherever the output is directed to) is connected to the process on your OS that is concerned with launching startup scripts like this, which does not run in a terminal, but is a user hidden process within for example the kernel. To open up a terminal with this message you should probably edit it to

(I'm not on Ubuntu right now so can't test this, but the gist is to explicitly open a terminal where you want this message to show up in)

If you want to execute your script in a terminal you should add Terminal=true to the file.
You can also set Hidden=false accordingly to what you want to achieve.

You should add /bin/bash -c in front of your '/path/to/your/script.sh'

The echo command output will be visible in your system logs, not in your terminal.

journalctl -b will show you the output of system boot logs, which is when your script is run.

Add your script at the of the contrab file

Then reboot to observe the change

Not the answer you're looking for? Browse other questions tagged bash ubuntu or ask your own question.

1
How to pass an argument from a bash script to 'x-terminal-emulator -e bash -c'?
0
Bash script not working in crontab
4
Bash ignoring SIGINT trap when 'select' loop is running
2
How can I run bash script in the background?