Is there an equivalent of the Window's Print Screen + Paste (or better yet the Mac OS Cmd+Shift+4, Space) in Gnome?

Shift+PrtScrn will do the job. A dialog appears on screen allowing you to select any part of it.

Gnome should have screenshot abilities built already in.

However, the default trigger is the Print key, which your keyboard may lack. You can remap this shortcut with gnome-keybinding-properties.

There are tons. I personally use import, from ImageMagick. It has the ability to capture the whole screen, a given window, or to let you select an area of the screen and just capture that

import will let you draw an area with the mouse to capture: 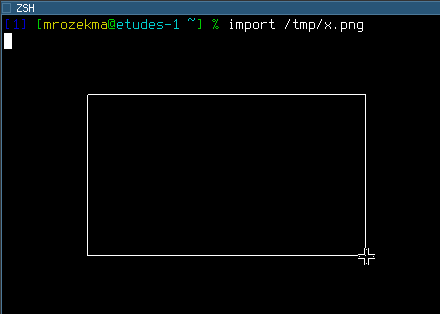 First you need to find out the X window ID:

Then you can run import:

You can also run import /path/to/output.png like when taking a screenshot of a specific area, and when it pauses to let you draw the area with your mouse, click on the target window.

Use root for the window ID:

You can use xbindkeys to bind those commands to the Print Screen key; I use a script called screenshot, so my configuration looks like:

Just wrote this small interface to xwd, to make it wait the provided number of seconds before it takes the dump. It seems to work.

Also, there are scrot and gnome-screenshot.

The ImageMagick import solution in Mr. Mrozek's answer has a famous "black box" bug on -window root - not everyone gets it, but I do.

According to this, gnome-screenshot is based on ImageMagick - but it is not a wrapper; I just browsed the code, and it is a big C application.

Hit print screen and if gnome is setup correctly, a screenshot utility will pop up.

Not the answer you're looking for? Browse other questions tagged gnome screenshot or ask your own question.

2
Screenshot of a window in a detached or remote screen
3
How to customize the shortcut that brings up the "search" screen in Fedora?
1
In GNOME, can I move icons from the notification tray to the system bar at the top of the screen?
12
How do I customize Gnome screen shield / curtain / login screen appearance?
5
Copy screenshot to clipboard isn't working after update to fedora 31
2
GNOME lock screen - programatically remove screen dimming
0
How to screen share using slack and wayland in Manjaro Gnome?