I am writing a shell script to install all my required applications on my Ubuntu PC in one shot (while I can take a stroll or do something else). For most applications adding -y to the end of the apt-get install statement, has worked well to avoid the need for any user involvement. My script looks something like this:

Though I no longer have to worry about Do you want to continue? [Y/n] or Press [ENTER] to continue or ctrl-c to cancel adding it, the problem is with wireshark, which requires a response to an interactive prompt as shown below: 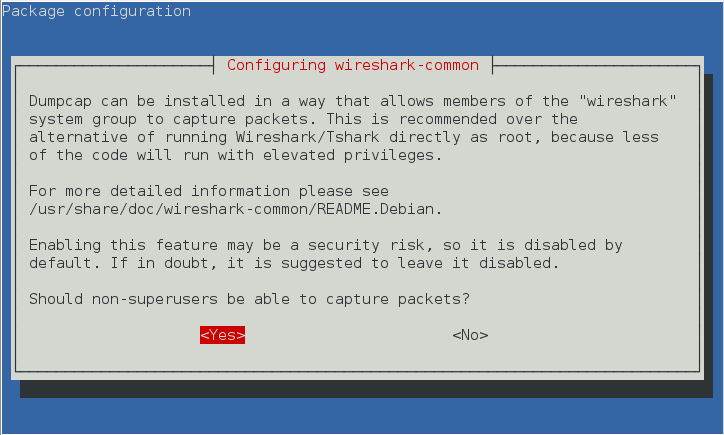 How can I avoid this mandatory intervention?

You might also want to suppress the output of apt-get. In that case:

The apt/dpkg system has the ability to provide un-attended or non-interactive installs.

This involves setting the DEBIAN_FRONTEND variable to noninteractive and using -y flag. For example:

If you get errors, you may need to set the q option to more strongly convince dpkg you are in fact doing a non-interactive install: DEBIAN_FRONTEND=noninteractive apt-get -yq install [packagename].

In some cases it might just be easier to follow the prompts for some of the packages you install later in that same script/shell process, in that case you would want to un-export the DEBIAN_FRONTEND variable:

For pre-setting of configuration options its useful to have debconf-utils installed, which will avail the command debconf-get-selections:

Not the answer you're looking for? Browse other questions tagged shell-script shell ubuntu wireshark interactive or ask your own question.