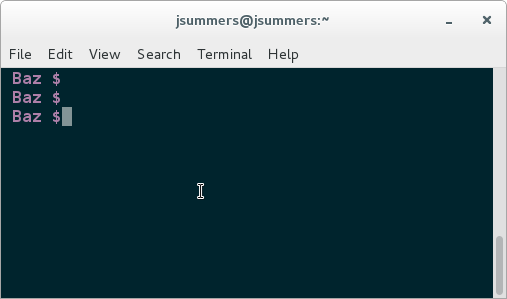 Enter the letter a multiple times: 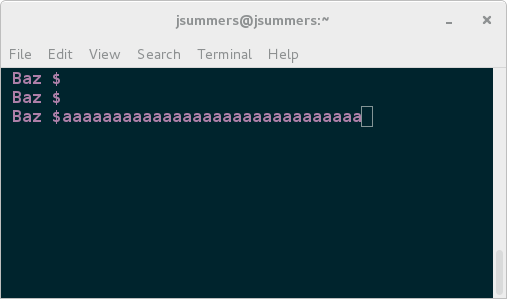 Instead of wrapping to a new line the text entered wraps onto the same line: 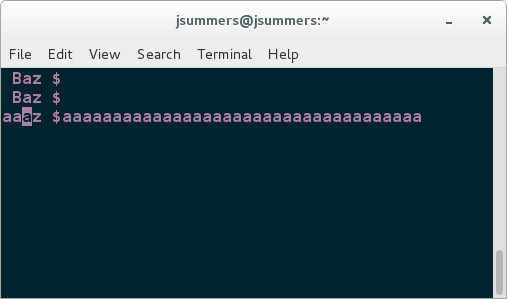 Now, start pressing b. The second time a line wrap is required, it will wrap to a new line: 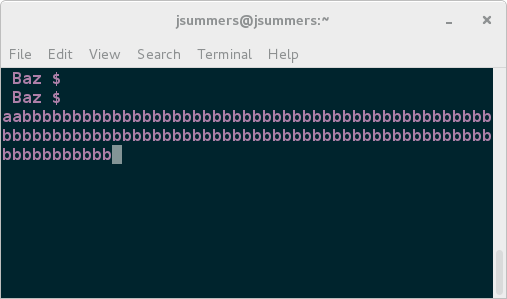 What causes this behavior?

Note the reason I want to use echo instead of the color directly is because I want to add the color conditionally based on the exit status of the previous command.

Using the color directly doesn't cause this behavior to occur.

To be clear, I really want to do this using echo because I want to change the color conditionally.

This is what I currently have right now:

\033[1;35m is 7 characters. bash cannot guess that those 7 characters have actually a null width. If not, it will think that they are 7 columns wide.

It (or rather readline the underlying line-editor it uses) wants to know what's the current position on the screen because it's using cursor positioning sequences (up, down, left, right) to move the cursor when you're using editing keys.

So you've got to tell it which of the characters in the prompt do not move the cursor. With bash, that's done by using \[...\] which tells the shell that what's inside has zero-width.

Also note that prompt expansion in bash does recognise \e as an ESC character, so you don't have to use echo -e. You can just do:

If you have to use echo, or better printf, you'd do:

For bold-magenta foreground. It also has some forms of conditional tests, including on $?, so your red if error, green otherwise could be written:

That defines a character (here 0x5) to be the escape character. Then by enclosing text between a pair of them, you're telling the shell that it's not visible. You can use any character other than 0x5, but it must not otherwise occur in your prompt and except in mksh, it has to be one ignored by the terminal because the shell does actually write it (along with the CR character).

ksh93 uses only one cursor positioning sequence: BS (which moves the cursor one column to the left). To move to the right, it just redraws the same characters. So it doesn't need to know the cursor position, only the width of each character your enter. That works as long as the terminal wraps at the margin by itself (so won't work properly with this terminator for instance). One side effect if you have a prompt with control sequences is that your tab-stops won't be properly aligned.

Not the answer you're looking for? Browse other questions tagged bash prompt or ask your own question.

76
Why is my bash prompt getting bugged when I browse the history?