Why the default eth0 interface is down by default on CentOS?

I am already a little bit familiar with Linux distros like Debian or Ubuntu (yeah, very similar) but I wanted to try Red Hat based - CentOS 6.2 . I have installed it on my Windows 7 host in virtualBox and tried to play with it a little.

I have come across a small problem, namely : the default eth0 interface is down by default. I use the option with NAT ( the virtual machine is 'behind' the host ). Even if I bring the interface up with

ifconfig eth0 up it does not work right away. I get this after bringing the interface up:

What should be done more to configure the network on CentOS machine? 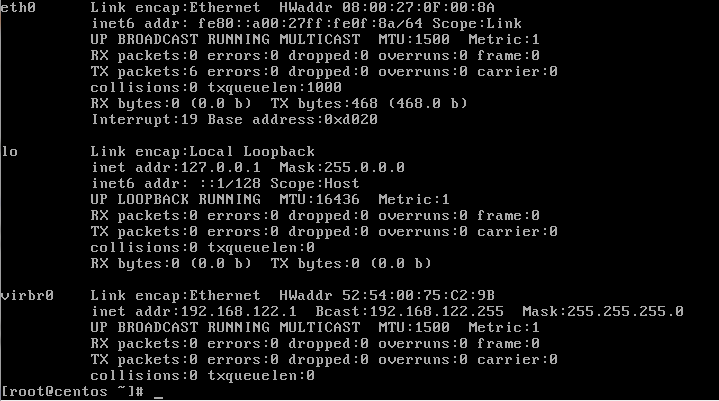 P.S. Sorry for screenshot but I do not know how to get the text out of the VirtualBox.

$IFNAME will be eth0 on many EL6 boxes, but on EL7 and EL6 boxes using the Consistent Network Device Naming scheme, it might be something else, like en3p1. Use the command ip link to get a list of network interfaces, including the ones that are currently down.

In your future installs, pay more attention. You blew past an option in the network configuration section that let you tell it to bring the interface up on boot. This on-boot option is off by default in EL6 and EL7, whereas in previous versions, it was on by default.

To make the network interface come up on first boot at install time in EL7, go to the Configure → General tab in the network configuration screen, then check the box labeled Automatically connect to the network when available.

As to why they changed this, I'd guess security reasons. It gives you a chance to tighten things down a bit from the default setup before bringing up the network interface for the first time.

If you don't have a DHCP server in your network, you must set a static IP address. Please consider the following example:

Add GATEWAY to your /etc/sysconfig/network file:

Issue the following command to start network on boot:

Take a look at your network interfaces

You didn't mention what version of CentOS you are using. If I'm not mistaken, 6.x uses NetworkManager by default.

I rarely install X windows on my servers, so NetworkManager is just a pain for me. I disable it and enable the standard 'network' service.

chkconfig NetworkManager off
chkconfig network on

To enable DHCP on the interface, run system-config-network, edit the appropriate device, save, and restart the network service. Alternately, you can edit /etc/sysconfig/network-scripts/ifcfg-eth0 and add

Save changes and restart the network service.

From what I have gathered from experimenting and reading, I agree with uther that Network Manager seems to load by default, but the network service does not.

When I recently had a VM host starting up without eth0 showing up in ifconfig output, it was because I had Network Manager running, network not running, and NM_CONTROLLED=no in my /etc/sysconfig/network-scripts/ifcfg-eth0 file.

As soon as I ran service network restart, eth0 showed up in ifconfig output. Rebooting, however, caused it to go away again.

The solution for me appears to be setting NM_CONTROLLED=no in /etc/sysconfig/network-scripts/ifcfg-eth0, then turning on the network service on startup (chkconfig network on, as uther and alexnorthsoul point out). I could (should?) probably turn NetworkManager off by default, but it is working for me now and I am nervous about touching anything else.

By the way, my goal was to get the system to honor the my selected static IP. When I left NetworkManager running and set NM_CONTROLLED=yes (or omitted it), I got eth0 showing up in ifconfig, but the address was a DHCP address, not my static IP. So turning off NetworkManager spared me from DHCP, and turning on network caused it to load my settings that included the static IP.

I am no sys admin, but rather a developer, so these are not words from a CentOS expert, but just a survivor of configuring the VMs I needed.

Not the answer you're looking for? Browse other questions tagged centos networking or ask your own question.

6
Using a bridge, an LXC container can't ping router, but the host OS can
2
Ubuntu: how do you swap eth0 and eth1? (Ubuntu 13.10 server in a VirtualBox VM)
13
How to properly set up 2 network interfaces in CentOS (running in VirtualBox)?
8
Identical MAC address on two different VM, yet I have internet connectivity
0
Is there a way to specify which NIC to use when using ssh? CentOS
4
Forcing HWADDR to correct itself in ifcfg-eth0 network script on boot CentOS 7
2
Centos 7 running on VM how to set default gateway - ping google.com fails
1
Mistery with DHCP of VirtualBox and CentOS 7
1
CentOS 7 with dual NICs cannot connect to the internet