How does bash retrieves what was written on the terminal (without Enter being pressed)?

Say that the ping command is running, and I type something on the terminal while ping is still running.

Now when ping terminates and bash gain back control, bash will print on the terminal what I typed while ping was running. This is a screenshot that shows what I mean: 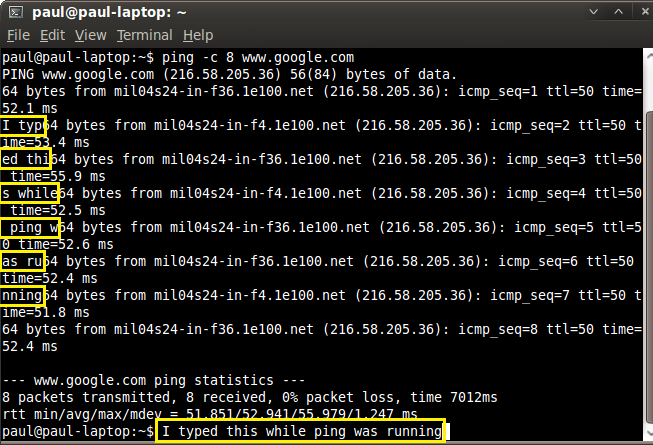 How did bash get this information? I am sure it did not get it from stdin, because when I typed "I typed this while ping was running", I did not press Enter (and so stdin is empty).

Bash did get your input from its standard input (stdin), which is the terminal.

A terminal can be in one of two modes: raw or cooked (also known as “character mode” and “line mode”, the terms “raw” and “cooked” are mostly used in the Unix world) (the word “cooked” was introduced as a pun to make an opposite to “raw”). In raw mode, the terminal transmits input immediately to the application. In cooked mode, the terminal reads a full line and provides a (very primitive) line edition mechanism, and only transmits the data to the application when the user presses Enter.

Terminals start in cooked mode. Applications that want more control over input, such as bash, set the terminal in raw mode while they're waiting for the user to type a command.

I believe the terminal buffers every line of text received through the keyboard, such that any program which has a file descriptor (i.e. fd0) attached to the terminals device file - won't see any text from the line until the terminal "sends" it - which happens when you press Enter.
(How the line editors of shells get around this - I'm not sure, but they definitely get at the text before you hit Enter)

Also when a shell launches a child process (in this case ping) it goes into in a suspended/waiting state as the child process runs, so even if the terminal wasn't withholding text from it, the shell would ignore it, assuming it was intended for the child process.

So the text you see appearing on the screen, is because the terminal is displaying it, but there is no program capturing it and doing anything with it, until the child exits - and the shell "wakes up' - then the text is sent to the shells line editor. Although I don't think all terminals necessarily do that.

Not the answer you're looking for? Browse other questions tagged bash terminal tty input or ask your own question.

2
How to automate a keystroke to a cli terminal appilcation like ranger?

3
How to display a BASH X terminal and graphics in split view window?
1
what is the file descriptor of my terminal
3
The effect of `stty --file=<terminal> <flag>` is only temporary for consoles in bash. Why?
1
bash throws "set-ena" when I press/write b in the terminal
2
How can I stop the terminal from asking for more pipe input?