Convince grep to output all lines, not just those with matches

Say I have the following file:

By default, grep returns each line that contains the search term:

Passing the --color parameter to grep will make it highlight the portion of the line that matches the search expression, but it still only returns lines that contain the expression. Is there a way to get grep to output every line in the source file, but highlight the matches?

My current terrible hack to accomplish this (at least on files that don't have 10000+ consecutive lines with no matches) is: 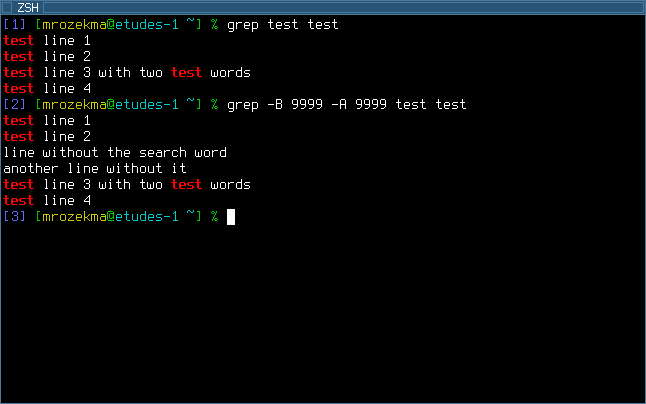 If grep can't accomplish this, is there another command-line tool that offers the same functionality? I've fiddled with ack, but it doesn't seem to have an option for it either.

What we're doing here is matching against the $ pattern and the test pattern, obviously $ doesn't have anything to colourize so only the test pattern gets color. The -E just turns on extended regex matching.

You can create a function out of it easily like this:

for Ubuntu and Debian, use ack-grep instead of ack

Another way to do this properly and portably with grep (besides using two regexes with alternation as in the accepted answer) is via the null pattern (and respectively null string).
It should work equally well with both -E and -F switches since, per the standard:

So it's simply a matter of running

I have the following function that I use for such things:

Internally it looks kind of ugly, it's nice and easy to use, like so:

or, for a slightly more real-world example:

You can change the colors to anything you like (which might be hard with grep--I'm not sure) by changing the 1 and 31 and 43 (after \e[) to different values. The codes to use are all over the place, but here's a quick intro: the 1 bolds the text, the 31 makes it red, and the 43 gives a yellow background. 32 or 33 would be different colors, and 44 or 45 would be different backgrounds: you get the idea. You can even make it blink (with a 5) if you're so inclined.

This doesn't use any special Perl modules, and Perl is nearly ubiquitous, so I would expect it to work just about anywhere. The grep solution is very clever, but the --color switch on grep is not available everywhere. For instance, I just tried this solution on a Solaris box running bash, and another running ksh, and my local Mac OS X machine running zsh. All worked just fine. Solaris choked on the grep --color solution, however.

Also, ack is awesome, and I recommend it to anyone who hasn't yet discovered it, but I've had some issues installing it on a few of the many servers I work on. (I forget why: I think related to Perl modules it required.)

Since I don't think I've ever worked on a Unix box that didn't have Perl installed (with the exception of embedded-type systems, Linksys routers, and such) I'd say this is pretty much a universally useable solution.

Use ripgrep with its --passthru parameter:

It's one of the fastest grepping tools, since it's built on top of Rust's regex engine which uses finite automata, SIMD and aggressive literal optimizations to make searching very fast.

Another way to achieve a similar effect is by modifying your pattern to match the empty string. For example, if you are searching using rg foo then using rg "^|foo" instead will emit every line in every file searched, but only occurrences of foo will be highlighted. This flag enables the same behavior without needing to modify the pattern.

Instead of using Grep, you can use Less:

To scroll to next matching line: n

To toggle highlighting: Esc u

Also you can change the highlighting color if you like.

Not very portable however, and even if Perl is installed, you may need to download another module. In addition it will color the entire line, not just the search word.

There's a much easier way to do this for GNU grep but I don't think it's portable (i.e., BSD grep):

None of the answers given so far do provide a portable solution.

Here is a portable1 shell function I already posted in a closed as duplicate question that doesn't require non standard tools or non standard extensions provided with perl, ack, ggrep, gsed, bash and the likes but only needs a POSIX shell and the POSIX mandatory utilities sed and printf:

You can use it that way:

The highlight color can be adjusted by using one of these codes in the sed command argument (32m being green here):

1 As long as your terminal supports ANSI colors escape sequences.

If you're interested in the return value of grep, then GNU sed is also the way:

You can add to the script modifications to the line, e.g.:

This checks that pattern appears on the current line, and stores it in the hold buffer if it is. At the end of the file ($), the last line is printed (p), then the hold space and pattern space are swapped (x). Next, the pattern space is tested for emptiness (/./), and if it is nonempty, exit with code 0 (Q0) otherwise with code 1 (Q1).

An alternative is /pattern/{:a $q1; n; ba}, which loops after detecting pattern, but changing the current line can get tricky with this. This works by:

By default, sed will exit with code 0, so with this expression, if the pattern is detected, the rest of the file is dumped and an exit code of 1 is produced.

A sed version, works on both bash and ash.

OP asked for grep, and that is what I RECOMMEND; but after trying hard to solve a problem with sed, for the record, here is a simple solution with it:

Will paint main in red.

Regarding grep, it also works using ^ (begin of line) instead of $ (end of line). Example:

And just to show this crazy alias that I DO NOT RECOMMEND, you can even let the open quotes:

all work! :) Don't worry if you forget to close the quote, bash will remember you with a "continuing line character".

Similar to the perl answer, but I use it with multiple expressions separated by |:

Not the answer you're looking for? Browse other questions tagged grep highlighting or ask your own question.

15
How to highlight a word in the output of "cat"?
5
Color matching but print other lines too
3
highlight a word without affecting the structure of text
2
Pattern highlighting command
3
bash: color matching string
1
Bash: Show the contents of a text file, with every occurrence of a word highlighted
0
Grep display both matched and umatched lines
-2
Linux how to highlight every occurrance of a word.
0
Highlight patterns in command output (grep-like but without excluding lines)
183
What color codes can I use in my Bash PS1 prompt?
See more linked questions

2
conditional coloring in grep
8
Extract all lines from a file starting with some sequence and then output it to another file
1
Grep a list for a word that exists in a line by itself and ignore all other lines that contain that word
16
How to split an output to two files with grep?
1
How to highlight terms in an output that has a live update?
0
How can I best search for 2 instances of 2 consecutive words on a line with grep or other search utility
2
Regular Expressions with `<` and `\?` strange matches