I now use a PC (of the lab where I work now) on which I have successfully installed Arch Linux not long ago. I want to connect to the HP printer there, already connected to the Ethernet of the lab. The printer is a "HP color laserjet m552".

I have installed hplip (refer to: CUPS/Printer-specific problems); when installing, I recall there were a lot of error messages.

When I tried to print some document, no printer was found. I ran sudo hp-setup (as advised here: Configure your printer using hp-setup). There was a dialog box appearing, which asked me for "PPD" file, and I don't know where it is and what it is for.

When I was finding material to solve this, unfortunately I find HP seems not to support Arch Linux. (See: Installing HPLIP and HPLIP Manual Install.)

Console error messages are, when I invoke hp-setup:

Meanwhile, I was prompted to choose a PPD file. The default folder for me to choose is /usr/share/ppd/hp, but when I choose anything, the box is still empty, saying I should choose a file. The printer name is shown, so I think connection is fine.

P.S.: I know this sort of thing is difficult to debug without playing around with the computer in person. If there lacks any information, just ask.

Initially I installed KDE on Arch linux. After many hours of trying to configure my HP laserjet professional, I reinstalled Arch linux wth the xfce desktop. Pacman install hplip and wget. Check with the Arch wiki to make sure all the dependancies are installed. Update the system frequently. Make sure your printer is visible to your system. I rebooted three or four times. Finally, I was able to print. Final thought. It seems that Arch needed wget to communicate with HP, while "hp-setup" did it's job. Finale suggestion. Never buy an HP laserjet profession that needs an hplip-plugin. I'll never do that again. Good luck.

Following these steps, I can now print documents using Evince on Arch Linux 4.16.9 with an HP LaserJet P1102 connected via USB: Instead of system-config-printer described above, you can use CUPS' web interface, reachable at localhost:631.

Before administrating printers, you have to add your user to the group sys, otherwise you'll run into errors in the web interface like "Unable to modify printer: Forbidden".

Alternatively, use vigr to edit /etc/group.

The web interface will prompt for this user and their password.

/etc/cups/cups-files.conf defines that members of groups sys (and root) can administrate printers:

After taking care of group membership, you can add printers and perform other administrative tasks: 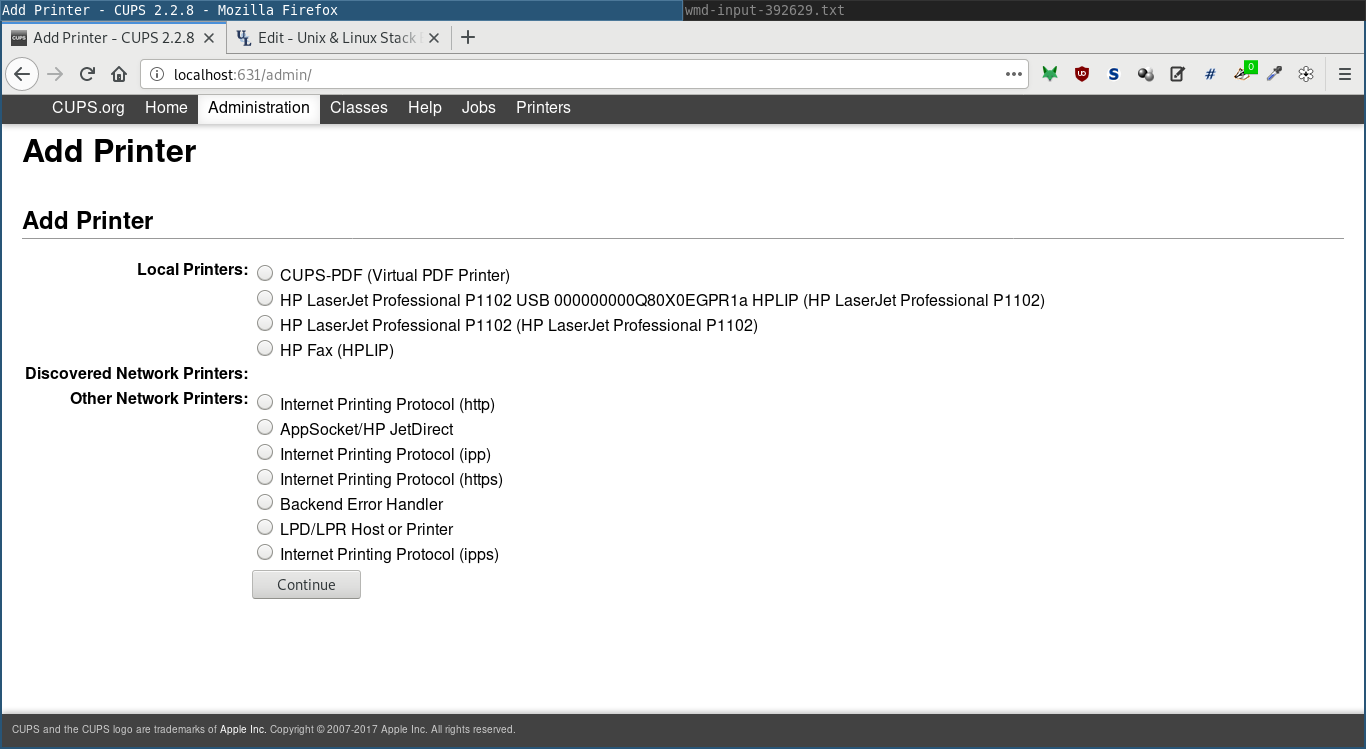 After selecting a printer in localhost:631/printers, you can also print a test page via the web interface: 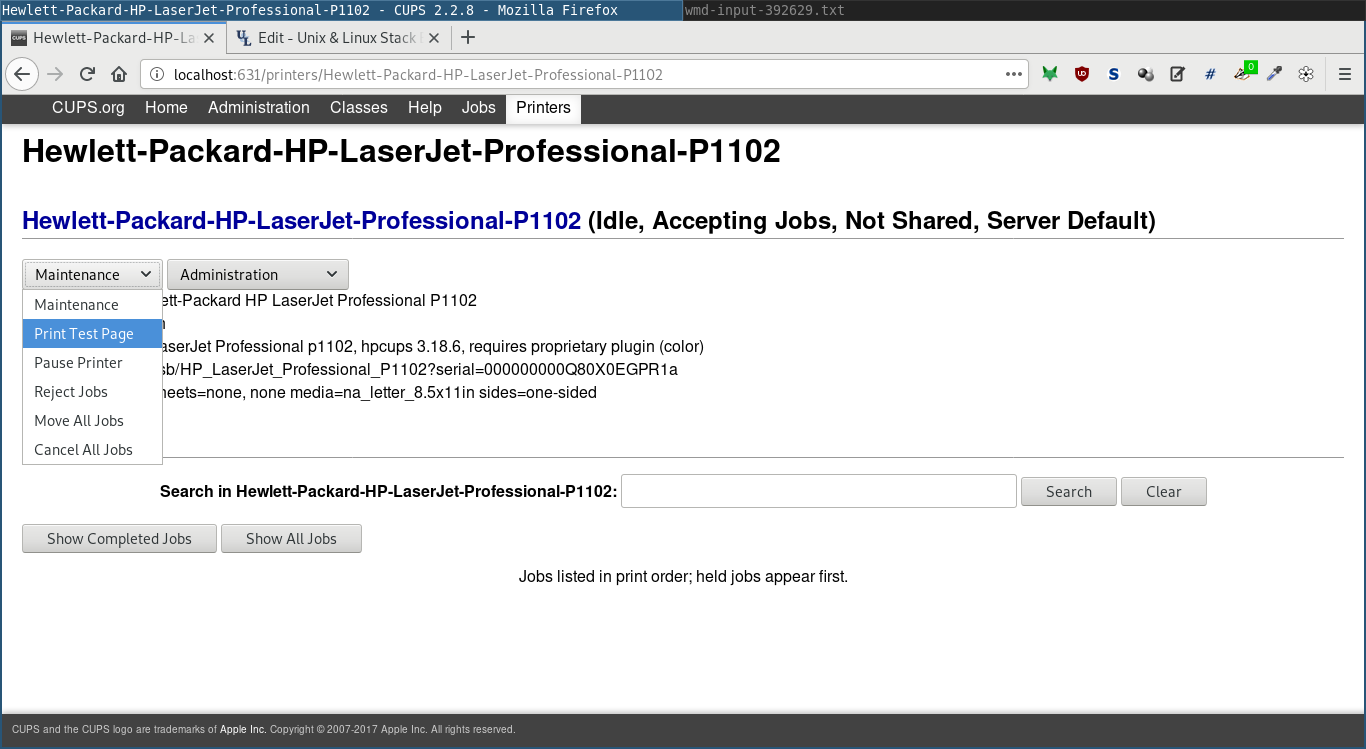 Keep lib in sync with driver

The library hplip from pacman and the driver plug-in installed via hp-setup -i have to have the same version, otherwise you'll be unable to print and see this error message in your systemd journal (inspect it with journalctl -e):

To fix this, you can run hp-setup -i again which will download and install the current driver.

I added the following to ~/.bash_aliases to prevent the driver and the library getting out of sync:

Recently, my printer would refuse to print; system-config-printer as well as the CUPS web interface would show it as paused and lpc status, yielded that the printer has "printing disabled".

I solved this by changing the printer's connection. Using the CUPS web interface mentioned before, I selected my printer and clicked "Modify Printer" in the drop-down list. Here, I changed the connection from

I don't know where this serial number belongs to and why it changed since I didn't get a new printer; it's not the one on the label on the printer's back.

This serial number does show up in the output of hp-info, though.

"error: No device selected/specified or that supports this functionality."

This error persisted when calling sudo hp-setup -i and I'm not sure the printer is supported anymore by HP for Arch Linux. I've since ditched the HP LaserJet P1102 and got a Brother DCP-L3550CDW whose printing feature worked out of the box on Arch Linux 5.3.12: In system-config-printer, I selected "LPD/LPR queue 'BINARY_P1" as the connection and "PCL Laser" as the driver.

To get the device's built-in scanner working, I followed these instructions.

Not the answer you're looking for? Browse other questions tagged arch-linux drivers printer or ask your own question.