How can I run BASIC code in a terminal?

I would like to run BASIC code, like you used to do on older computers, in Linux. (I am looking for a BASIC Interrupter that can run OS functions natively)

What options do I have? (Preferably for Debian-based and Arch-based)

If you want to run natively in Linux BASIC you have several packages in Debian to choose from:

Brandy is an interpreter for BBC BASIC V, the dialect of BASIC that Acorn Computers supplied with their ranges of desktop computers that use the ARM processor such as the Archimedes and Risc PC, and is still in use on these and compatibles.

This was the BASIC used on the 6502-based BBC Micro that Acorn made during the 1980s.

bwBASIC can be configured to emulate features, commands, and functions available on different types of BASIC interpreters;

bwBASIC implements one feature not available in previous BASIC interpreters: a shell command can be entered interactively at the bwBASIC prompt, and the interpreter will execute it under a command shell.
For instance, the command "dir *.bas" can be entered in bwBASIC (under DOS, or "ls -l *.bas" under UNIX) and it will be executed as from the operating system command line.

Shell commands can also be given on numbered lines in a bwBASIC program, so that bwBASIC can be used as a shell programming language. bwBASIC's implementation of the RMDIR, CHDIR, MKDIR, NAME, KILL, ENVIRON, and ENVIRON$() commands and functions offer further shell-processing capabilities.

As for my personal experience, I do prefer bwbasic as it allows to have the power of BASIC in a text command line or shell script.

As an alternative, you also have several emulation packages of computers of the old, that obviously besides the BASIC syntax implement all the environment of some old computer you may want to relive.

You wrote in a comment to Foon's answer that

Rather, I'll take the above to mean that you want something that starts a BASIC interpreter automatically, similar to but not quite like how early microcomputers (such as the Apple II, Commodore C-64, Zinclair ZX-81, and their ilk) booted into a native BASIC interpreter.

There are basically three ways to do this that I can think of:

Create a desktop launcher that opens a terminal

This is the least invasive, because it works fully within the system and environment you are used to.

Basically, through whatever means your desktop environment provides, you create a program launcher and set it up to launch the BASIC interpreter of your choice in a terminal. For extra effect, you can set specific fonts, colors, etc., to simulate an environment of days gone by. Exactly how you would do this depends on the desktop environment you are using, which you haven't specified, but right-clicking around where you are currently clicking to launch applications and looking for a choice to create a new launcher will be a good start.

This is a little more involved than a simple desktop launcher, but providers better isolation so you don't risk messing up your own files. First, install a BASIC interpreter; I'll use bwbasic for the example, but anything goes, really, as long as it runs natively in a terminal. Then add a user and set its shell to be the bwbasic interpreter. This can be done through the GUI, but that depends on which desktop environment you are using; the portable approach is to do so in a terminal using useradd. This will be something similar to

Then, you should be able to enter a clean BASIC environment through sudo:

You can create a launcher (as above) that executes this command in a terminal, if you want to.

Give your normal password when prompted by sudo. You can edit the sudoers configuration to avoid the password prompt if desired, but be aware that editing sudoers is somewhat complicated and even more so, risky; you could lock yourself out of the root account, making it quite difficult to repair the configuration.

Use a BASIC interpreter as init

This is the most invasive approach, but also gets you closest to how early microcomputers worked, by booting directly into a BASIC interpreter. I don't recommend this, and would consider it unlikely to work without significant work, but am including it for completeness.

The Linux kernel accepts a command line parameter (yes, the Linux kernel has command line parameters; you can see the currently booted command line by reading from /proc/cmdline) named init, which specifies which program to execute once kernel initialization is complete. You can configure the boot loader (most likely GRUB) to allow you to boot a kernel entry that says that init should be /usr/bin/bwbasic (or whichever other BASIC interpreter you installed).

For this to work, the BASIC interpreter, as well as all files it requires, must be located on the root (/) file system. This is because one of init's tasks is to mount all file systems, and because you are providing a non-init program as init, the non-root file systems will not have been mounted. (I believe another of init's tasks is to remount the root file system in read-write mode, so by the trivial approach you won't be able to save anything. You might, however, depending on the exact implementation details, be able to have the system execute something like mount -o remount,rw / to remount the root file system read-write.) Your chosen BASIC interpreter must also not depend on anything else that init is responsible for, and you will not have access to any facilities handled by init or by any processes spawned by init (for example, networking or multiuser support).

A kernel command line of something like ro quiet init=/usr/bin/bwbasic will probably get you pretty close to how it looked in the old days.

Since everyone seems to be assuming you mean "pre-IBM PC" by "older computers", I'm going to go the other route and offer an answer that interprets "older computers" to mean "IBM-compatibles before Windows 9x".

If, you meant computers running versions of MS-DOS that included QBASIC.EXE, you have three options, depending on how strictly you define running them "on Linux":

My Debian systems, and probably most other Linux distributions, have several choices available directly through the package manager. Among them:

sdlBasic is a small, efficient and multiplatform BASIC interpreter for creating games using the power of SDL library. It was inspired by the old and glorious AMOS.

Just to throw out an alternative: there are multiple emulators for Linux that can run your old computers. As an example, with xkegs, if you boot it up, you should have an applesoft basic prompt waiting for you. Communicating with other linux stuff is an exercise left to the reader (hint: technically, I believe you can redirect output in your emulated apple to the emulated printer, which xkegs will then expose as a network socket which you can use e.g. nc to feed into some other piped applications etc. Not sure if there's a way to go the other way, but expect something similar could be done). I would expect the commodore 64 emulators would similarily have a way to run commodore's basic, etc.

There are a lot of alternatives. My suggestion is similar to ssokolow's answer. If you want a "modern" BASIC but with a syntax similar to the old BASIC interpreters, then you should give to BaCon a try. It's a BASIC transpiler which generates native code. The project has a pretty good manual, a lot of libraries and examples, and even an IDE written in BaCon. 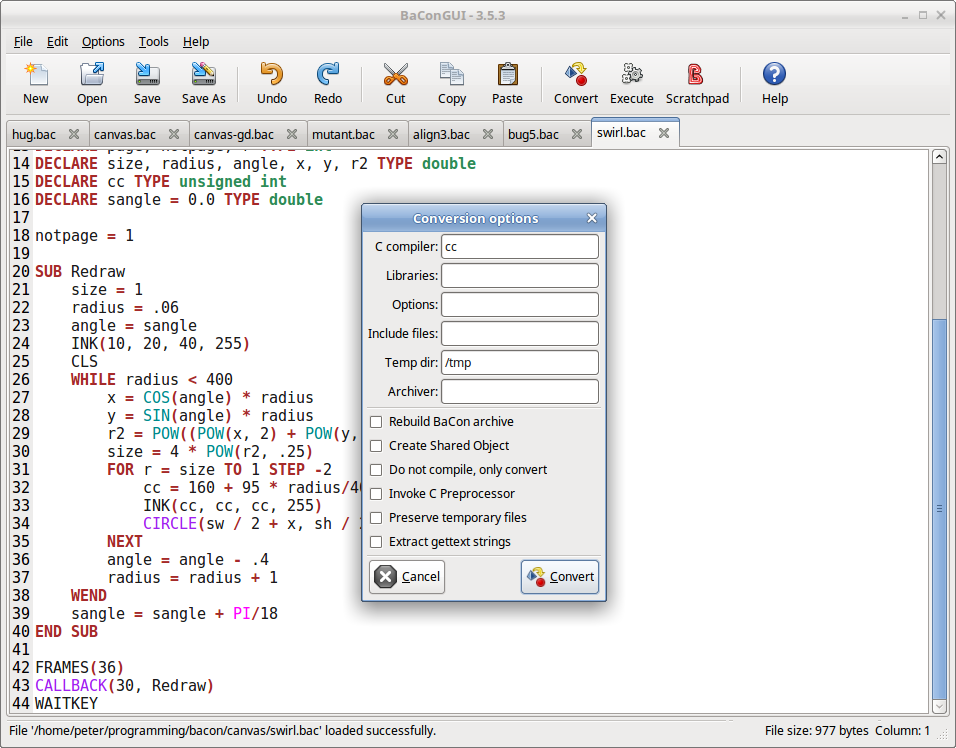 You can run a C64 in your browser, and use BASIC that way.

Be aware the keyboard layout is different, i.e. Shift-2 for quotes.

Applesoft BASIC if you prefer- http://calormen.com/jsbasic/

There are emulators of other machines online,
but many of them go straight to whatever program you load,
without emulating the initial keyboard input required to get there.

Not the answer you're looking for? Browse other questions tagged linux command-line programming or ask your own question.

68
How to insert text into a root-owned file using sudo?