Create self-signed certificate with end-date in the past

I would like to create self-signed certificates on the fly with arbitrary start- and end-dates, including end-dates in the past. I would prefer to use standard tools, e.g., OpenSSL, but anything that gets the job done would be great.

The Stack Overflow question How to generate openssl certificate with expiry less than one day? asks a similar question, but I want my certificate to be self-signed.

In case you were wondering, the certificates are needed for automated testing.

You have two ways of creating certificates in the past. Either faking the time (1)(2), or defining the time interval when signing the certificate (3).

1) Firstly, about faking the time: to make one program think it is in a different date from the system, have a look at libfaketime and faketime

To install it in Debian:

You would then use faketime before the openssl command.

For examples of use:

The given command will be tricked into believing that the current system time is the one specified in the timestamp. The wall clock will continue to run from this date and time unless specified otherwise (see advanced options). Actually, faketime is a simple wrapper for libfaketime, which uses the LD_PRELOAD mechanism to load a small library which intercepts system calls to functions such as time(2) and fstat(2).

So for instance, in your case, you can very well define a date of 2008, and create then a certificate with the validity of 2 years up to 2010.

As a side note, this utility can be used in several Unix versions, including MacOS, as an wrapper to any kind of programs (not exclusive to the command line).

As a clarification, only the binaries loaded with this method (and their children) have their time changed, and the fake time does not affect the current time of the rest of the system.

2) As @Wyzard states, you also have the datefudge package which is very similar in use to faketime.

As differences, datefudge does not influence fstat (i.e. does not change file time creation). It also has it´s own library, datefudge.so, that it loads using LD_PRELOAD.

It also has a -s static time where the time referenced is always returned despite how many extra seconds have passed.

The misconception of the question you link to in your question, is that certificate validity is not defined at request time (at the CSR request), but when signing it.

When using openssl ca to create the self-signed certificate, add the options -startdate and -enddate.

The date format in those two options, according to openssl sources at openssl/crypto/x509/x509_vfy.c, is ASN1_TIME aka ASN1UTCTime: the format must be either YYMMDDHHMMSSZ or YYYYMMDDHHMMSSZ.

And from the CHANGE log (2038 bug?) - This change log is just as an additional footnote, as it only concerns those using directly the API.

*) Add the ASN.1 types INT32, UINT32, INT64, UINT64 and variants prefixed with Z. These are meant to replace LONG and ZLONG and to be size safe. The use of LONG and ZLONG is discouraged and scheduled for deprecation in OpenSSL 1.2.0.

-startdate and -enddate do appear in the openssl sources and CHANGE log; as @guntbert noted, while they do not appear in the main man openssl page, they also appear in man ca:

*) Fix -startdate and -enddate (which was missing) arguments to 'ca' program.

P.S. As for the chosen answer of the question you reference from StackExchange: it is generally a bad idea to change the system time, especially in production systems; and with the methods in this answer you do not need root privileges when using them.

I'm almost surprised to find that the obvious thing works: whereas openssl takes as an argument the number of days for which the certificate should be valid, just supply a negative number!

Or you could use something like this short python program ... (caveats apply)

Please note that it's a minimal demonstration program, so it does not bother to set any extensions, (e.g. basicConstraints) and uses fixed serial. 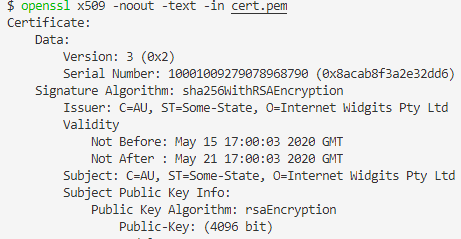 Not the answer you're looking for? Browse other questions tagged openssl certificates or ask your own question.