What are the system requirements for KDE?

KDE.org promotes Plasma Desktop as "fast and efficient", but there is no relevant information given in order to have such experience. The web content is now entirely changed (2019), but was seen until recently (via Internet Archive) as per screenshot. 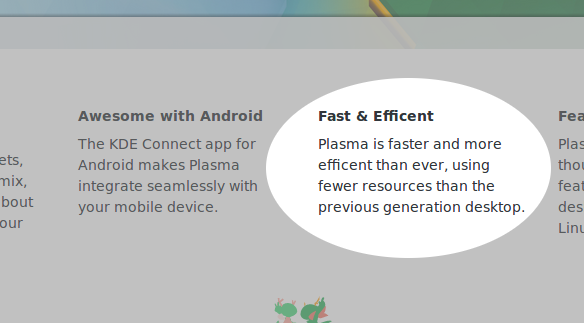 Text from screenshot: Fast & Efficient. Plasma is faster and more efficent than ever, using fewer resources than the previous generation desktop.

No relevant documentation was found to this asked date:

P.S.: Look for the most notable source, even non-official. For example, someone whom had tested KDE Plasma Desktop on an actual minimum hardware, published a detailed review on web site that is public--that may be considered notable next to official.

We cannot be sure.

KDE Plasma Desktop has no official system requirements that is known to end-users to this answered date. The relevant documentation was either lost during the development, or missing from the beginning.

KDE neon is a relatively new project announced in early 2016, and has noted the minimum requirements for KDE neon User Edition 5.6.

Despite featuring the KDE Plasma Desktop, the FAQ page has explained that KDE neon is a rapidly updated software repository, not "the KDE distro" and limited to 64-bit builds only. Hence that is not directly applicable to KDE Plasma Desktop itself.

The only other system requirements (2013) found was relevant to KDE Plasma Active, which is the KDE Plasma 4 for devices with touchscreens. Side note: Plasma Active has been superseded by Plasma Mobile, according to the community wiki.

Besides these two sources, KDE does not seem to have prepared any relevant documentation for KDE Plasma Desktop that are accessible to the end-users.

The Fedora Project distributes alternative desktops called "Fedora Spins", which includes the KDE Plasma Desktop variant. Fedora Magazine has published an article about KDE Plasma 5 when the Fedora Spins was under heavy development (2016).

There is a notable mention of performance with KDE Plasma 5:

For those worried about performance and computer resources, Plasma 5 is a good option. It isn’t as heavyweight as previous versions of KDE Plasma, and you can also reduce the number of effects running in your desktop as well if you need to (I was able to run it well with 1GB of RAM in an Atom notebook).

That "Plasma 5" refers to the one included in Fedora 23, which was hinted by the last included link to previous article about Fedora 23 KDE within the article.

Within the article about KDE Plasma 5, browsing the comments underneath leads to this meaningful comment left by the author:

Sylvia Sánchez: With Opera or Firefox (both installed), Gimp, LibreOffice and some other nice stuff. Maybe you’d like to read “How do you Fedora, Sylvia Sánchez?”, there’s explained some of the things I do with a 1GB Atom netbook. I don’t know what people do to need that much RAM [...] But don’t say is a joke. My netbook isn’t a joke at all, it’s pretty useful and serious.

Based on the given clue of “How do you Fedora, Sylvia Sánchez?”, looking around the web site leads to the relevant article about the author. Within the article, more information about the hardware was found.

Her computer is a Magalhães 2 netbook, which is Intel’s version of the One Laptop per Child (OLPC) program. Everything is Intel inside and it works very well with Linux in general, and Fedora in particular. It is equipped with a 150GB hard drive, 1GB of RAM, and a 10.1″ screen. The processor is an Intel N450 running at 1.66GHz and is equipped with the GMA3150 card for graphics.

Using "N450" as the keyword to search on the Intel website leads to the product specifications for the Intel Atom® Processor N450 (512K Cache, 1.66 GHz).

Using "GMA3150" as the keyword to search on the web leads to this hardware review on Notebookcheck and this guide on Intel via Intel GMA on Wikipedia. The latter has some information related to Linux.

In related matter, the author whom had left the meaningful comment on Fedora Magazine, was found to be a Fedora Ambassador since 2015 and have been interviewed on Linux Rig.

Q3: What distribution do you run on your main desktop/laptop?
A3: I have a laptop running Fedora 27 and a netbook with Debian Testing.

Q4: What desktop environment do you use and why do you use it?
A4: I use KDE Plasma 5 on Fedora and Xfce with Plank dock on Debian Testing.

By connecting the pieces of alternative source, we can summarize that KDE Plasma Desktop has the recommended minimum requirements as follows:

The requirements were originally found to have been tested with KDE Plasma 5.4; however, KDE Plasma has become more resource efficient in recent years. KDE has made some announcements that supports the claim, with KDE Plasma 5.12: Speed. Stability. Simplicity. and KDE Plasma 5.13: Fast, Lightweight and Full Featured.

Disclaimer: The original author of this answer have tested KDE Plasma 5.12 in Kubuntu 18.04 running on 1 GB RAM with Intel Celeron M 1.6 GHz (2009) that supports only 32-bit and has slightly higher rating than Intel Atom N450 1.66 GHz (2010). Tested from live session, seems usable by default. User experience may be improved by changing some settings: Turn off the desktop effects and disable unused services.

We can now conclude that the recommended minimum requirements for KDE Plasma Desktop, through the alternative source, are indeed notable and deemed usable for daily use. We cannot be sure, but this seems good enough to tell.

After some digging, I found that Kubuntu 16.04 which had KDE Plasma 5.5 as desktop required 1 GB RAM, 10 GB hard drive and a 1 GHz processor. See the following : "Recommended system requirements for Kubuntu 16.04 LTS remain the same as for 14.04 LTS. The run competently the distro asks for 1GB of RAM, a 1GHz (x86) or better dual-core processor, and 10 GB of hard-drive space."

0
Is there a minimum requirement for Plasma Desktop?

10
KDE System Tray Organizer
2
KDE Kubuntu System Monitor ProcessTable.sgrd and SystemLoad2.sgrd malformed XML
2
How does the new KDE Neon compare with Kubuntu and what are the advantages and disadvantages of each
1
How can I correct errors in the KDE Start Menu/Launcher?
1
What is the rationale for KDE's Neon project?
4
Increase System Tray Icon Size in KDE
3
In KDE Konsole edit color scheme - what are color1, color2,...color8?