Difference between Xorg and Gnome/KDE/Xfce

I want to learn more about UNIX systems and I think I have a pretty straight forward question. I think I know what X is used for: It gives a standard to applications to present their UI's (among other things).

But why then is there a need for Gnome/KDE and how do they relate to X? I thought that they were using X as some sort of interface between the application and the GUI, so the GUI is customize-able while the interface stays the same across applications.

Is that true or is Gnome/KDE independent of X?

(I am looking into the relation of GNOME and X. I'd like to share some of my understandings. I will present it in a logical way as much as I can. And I try to make the wording precise.)

1. What is GUI composed of?

I guess everyone knows what GUI is.

Below is an illustration of the basic components of a GUI. 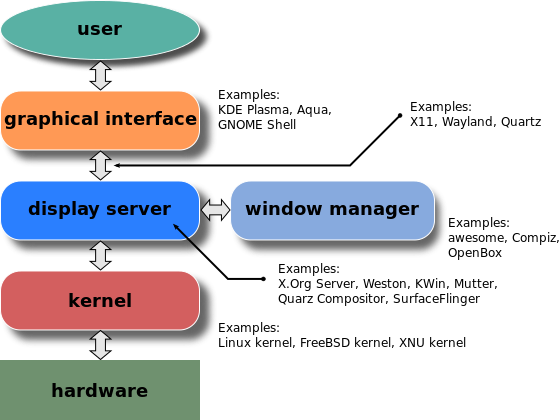 Windowing system is just a type of GUI that implements WIMP (windows, icons, menus, pointer) paradigm for a user interface.

Here is a list of major windowing systems for both Linux and Windows systems.

Since client and server are involved, communication protocol is necessary, which is called display server protocol of course.

A display server is a program whose primary task is to coordinate the input and output of its clients to and from the rest of the operating system, the hardware, and each other. It provides an abstraction of the graphics hardware for use by higher-level (no surprise that a GUI system has a hierarchical design) elements of the graphical interface such as a window manager.

There are several display servers available. Such as:

2. What does X mean exactly?

X, X11 and X Window System are synonyms. They all stand for a windowing system.

As said above, the key component, the display server, of the X windowing system is the X.Org Server.

And according to here:

An X.Org Server is a program that provides display and user input services to other programs. In comparison, a file server provides other programs with access to file storage devices. File servers are typically located in a remote location and you use the services of a file server from the machine that you are located at. In contrast, an X Server is typically running on the machine that you are located at; display and user input services may be requested by programs running on your machine, as well as by programs running on remote machines.

So X windowing system is composed of: 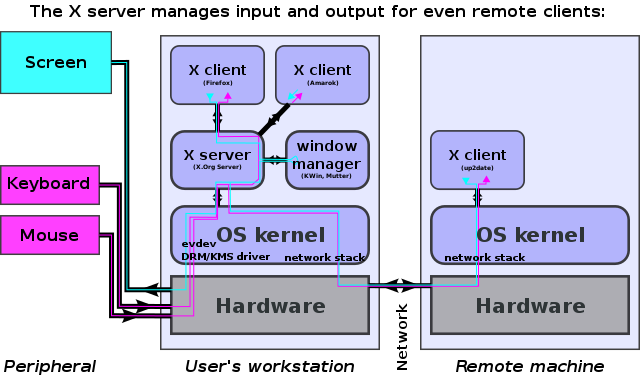 X (the windowing system I think) provides the basic framework for a GUI environment: drawing and moving windows on the display device and interacting with a mouse and keyboard. X does not mandate the user interface – this is handled by individual programs. As such, the visual styling of X-based environments varies greatly; different programs may present radically different interfaces.

In other words, X windowing system only gives a program the ability to do basic things like drawing/moving windows and input interacting. X doesn't enforce visual styles. It just provides a way to draw, not what to draw. So what you said "...It gives a standard to applications to present their UI's..." is incorrect.

3. What is Window Manager?

4. What are GNOME/KDE desktops

GNOME and KDE desktops are both Linux Desktop Environment. A desktop environment is a bundle of programs running on top of an operating system, which share a common GUI.

But just like I mentioned above, X11, as a display server, only provides the basic drawing ability through some libs like Xlib or XCB. Applications that directly interface X11 through such libs can have radically different visual styles.

So how to create a common GUI? Here comes the widget toolkits. Such as GTK+ and Qt. They are popular in Wayland and X11 windowing systems.

GNOME use the GTK+.

KDE use the Qt.

And here is a comparison of X Window System Desktop Environments.

The are all display managers, as indicated the "dm" part.

Personally, I think the Display Manager is a misleading name. It's better to be called graphical login manager. It is typically a graphical user interface that is displayed at the end of the boot process in place of the default shell.

A display manager can starts a session on an X server from the same or another computer.

To summarize...hope I am not over elaborating...

I draw a rough conceptual illustration. The 3 parts above the OS are very customizable. That's why so much flexibility (confusion) arise. 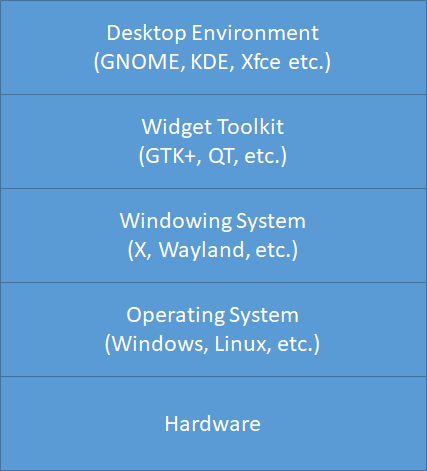 And here are some discussion about QT and GTK (maybe offtopic to this thread though...)

Xorg (and the earlier Xfree, and earlier X10) is a server for a protocol more completely called the X Window System; it allows applications to draw on "the screen". Which can be remote with X. Gnome/KDE/Xfce and other window managers / desktop environments are special applications that run in X that draw things like borders and icons and minimize and maximize that the applications themselves don't.

And, since Gnome and KDE both can (or did) run on MS Windows (and Wayland to varying degrees), yes they are (or can be) independent of X.

Not the answer you're looking for? Browse other questions tagged x11 xorg gnome kde desktop-environment or ask your own question.

89
What is difference between GTK and QT applications?

4
Switch to Gnome from KDE without logging out
3
difference between X and Xorg executables under Debian 6.0(kernel 2.6.32-5-686)
7
Difference between server-side and client-side compositing in Xorg?
9
How do font-settings in gnome, kde and xfce work?
0
Can't switch between KDE/Gnome
0
Replacing GNOME with KDE on openSUSE
2
How to change icons and tray icons in Gnome?
1
unable to stop gnome-keyring starting in X-MATE desktop session