Every AD SSH login starts with a failure in audit.log

Whenever I login to my Centos 7.x server I always get a transparent failure in the audit.log. This is making my attempts to have a daily script for failed logins very difficult as we can't be sure what's a real failure. Here's an excerpt from aureport -au -ts today

You can see the first 2 rows are failures then I get an immediate success. Does anyone have any clue why this may be happening?

Edit_2: I've disabled GSSAPIAuthentication now with no ill effect and the error in my SSH logs for gssapi-with-mic has gone......however (!), I am left with the Failed publickey error.

So my server allows both AD logins (uid + password) and passwordless logins (public/private keys). I think my issue is this very fact, and I may not be able to resolve it, i.e. SSH is expecting either method and if one isn't used then the other writes an error to the log.

Does anyone else have experience of this?

Edit_3: Problem solved - thanks to Liczyrzrepa.

So it seems that Putty's default settings are to "Attempt authentication using Pageant" (see image below). When I created a new Putty session to the server in question and disabled this setting, I no longer see the Failed publickey error. 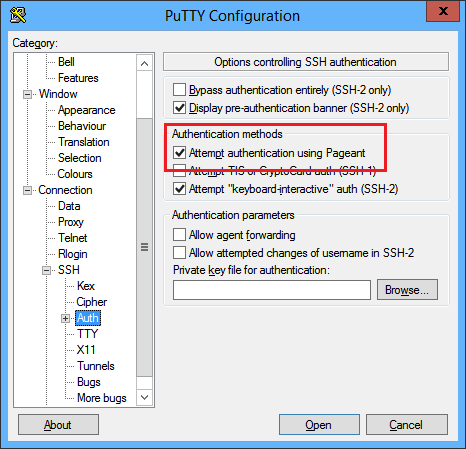 By default, the OpenSSH client will attempt Public Key authentication if you have previously created keys. My guess is that if you do ls ${HOME}/.ssh/ you'll see a keypair - id_rsa and id_rsa.pub. When your client connects to the server, it attempts to use this keypair to login. Because id_rsa.pub is not in ${HOME}/.ssh/authorized_keys on your server, or that file has incorrect permissions, sshd on the server correctly marks that login attempt as having failed. Try the following:

Setting that option will prevent the SSH client from using keys in ${HOME}/.ssh/ when trying to authenticate to the server. If that doesn't keep the log messages from showing up, add -vv to the ssh client options so we can see exactly what it's up to.

Apologies for resurrecting an old thread, but I found it while searching for a similar issue.

There is a second potential cause of false positive SSH error messages on Linux systems which have more than one authentication source for users (e.g. LDAP and local users). The default configuration is often to check for local users first, using the "pam_unix.so" module. If the user does not exist as a local user, then this will always generate a failure log message, even if the check for a user in the other authentication source succeeds.

If (as is often the case) the LDAP users are the common case, this can be resolved for LDAP users by checking LDAP first and then trying local authentication. For example, for Debian 10, I changed two lines in /etc/pam.d/common-auth from:

=> the two lines with "success=" are swapped, the numbers changed to match the new location ("success=" skips that many lines on a successful return from the module), and the "use_first_pass" flag is moved to keep it on the second line

This isn't a complete solution, as it means that LDAP is checked for local users (which may not be desirable)

There is a Redhat solution documenting a different way to resolve this for Redhat like Linux distros, which I believe doesn't have this drawback (pam_localuser.so checks if the user exists as a local user, before trying to authenticate):

It should be possible to implement the same solution for Debian like systems, but I haven't done so.

Not the answer you're looking for? Browse other questions tagged ssh login active-directory audit or ask your own question.

0
non root ssh keys
1
What's wrong with my AD/LDAP integration?
2
Was my Unix server compromised?
1
log or restrict the source user of ssh login
0
ssh passwordless login from windows to linux fails
2
SSH Configuration Help / Can't tunnel
0
Is it possible to set ClientAliveInterval from the client side?