At the blinking cursor, I can either ALT-F4 to boot to UEFI or ESC and I (capital i) or continue to boot to my 2nd SSD with a Windows 10 install.

If I try holding the SHIFT key on reboot I instead see capital GRUB with a blinking cursor on a black screen.

Hitting RETURN takes me to my 2nd SSD with a Win 10 install.

The only change I have made to my UEFI is to disable FastBoot.

Next I tried Boot Repair from a live USB, and attempted to reinstall my grub, but for some reason it did not 'see' my ESP at sda1, only sda and sda2 which is my root partition.

So, probably a mistake, I let it go ahead and install grub in sda2.

Next I relaunched gparted from a live USB and reexamined my partitions.

Now I was seeing an error icon on my ESP at sda1, saying it wasn't recognized because I was missing certain files (see attached esp_warning).

I am also getting a warning whenever launching gparted about a discrepancy between Linux and the driver descriptor in regards to physical block size. (attached LibParted_warning)

Question> For my GPT partitioned drive, does it matter what partition flag I have set for my ESP? It was set to 'boot', then I tried 'bios-grub' but neither worked. Results of boot-repair here http://paste.ubuntu.com/23750353/

The Boot Repair results DO seem to indicate a few things wrong. I assume that reinstalling grub with Boot repair AFTER setting my ESP flag to bios-grub may be part of the reason?

And before anyone comments on my swap size
1- storage is relatively cheap.
2- I use my Linux PC primarily for particle simulations in Houdini and got some feedback from Linux-Houdini experts a lot more knowledgeable than I
3- If after several months of use I discover I rarely use that amount, I assume I can easily increase my home partition and reduce swap.

I realize this is a long post but trying to include as much information as possible. 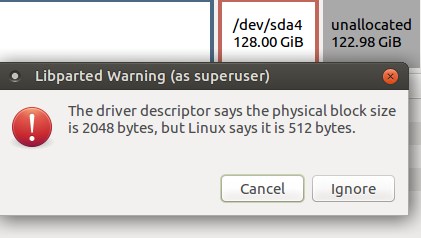 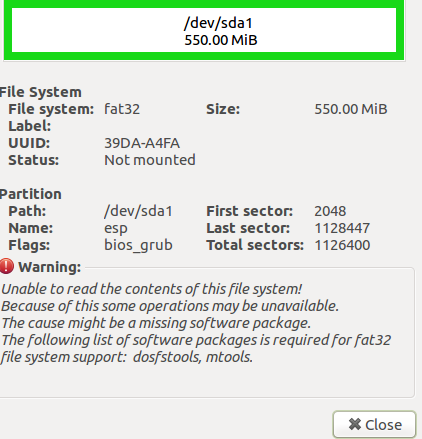 I just got my dual boot of Windows 10 (pre-installed on a Dell computer) and Linux mint working. I followed techmint instructions for creating the dual boot for Windows 10 and Linux Mint 18 in UEFI.

After the install the system would only boot to Windows and going into UEFI didn't show any sign of Linux. Changing the boot mode to Legacy Bios mode (It's F12 during boot up on a Dell, but different for each hardware manufacturer) allows the computer to boot into Linux, but there was no sign of Windows.

The solution for me was to find a way to boot into Linux in UEFI mode and then run boot-repair:

From here on out I'm in UEFI mode and GRUB comes up when I boot, where I can select my Linux Mint or Windows installs.

Not the answer you're looking for? Browse other questions tagged ubuntu grub or ask your own question.