How to view the WPA2 PEAP certificate offered by an AP?

I have to connect to a WPA2 Enterprise network which only works if I don't verify the certificate. I would prefer not to do this, because this way anyone can see the MSCHAPv2 messages.

The first step to fixing this would be looking at the certificate offered by the AP, then configuring wpa_supplicant to only trust that one. But I don't know how to get the certificate. The wpa_cli "status" command doesn't show it and it's not in any logs.

I'm also curious about which SSL/TLS cipher suites are used. Is it possible to connect manually, maybe with openssl s_client?

You could use Wireshark to dump the handshake, then convert the binary data to PEM with openssl, as suggested by @grawity in a similar question at superuser:

Sadly, wpa_supplicant doesn't have an option to dump the certificates even in debug mode. (I'll update this if I find a better way.) You can still monitor the actual EAPOL authentication process, though. First, install Wireshark.

While disconnected, bring the interface up manually and start a capture on it: 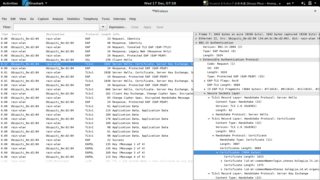 The server will send its certificates immediately after ServerHello. Select the first such packet, then dig into:

Right-click the first instance of "Certificate (stuff)" and choose "Export selected packet bytes". Wireshark will save it as a file, in binary DER format. Repeat this for all other certificates. The topmost one (RADIUS server's) has information that you can configure in altsubject_match; the last one (root CA) should be given to wpa_supplicant as ca_cert.

Now you have a few *.crt or *.der files in binary DER format. Convert them to PEM "text" format:

(If your wpa_supplicant is using OpenSSL as the TLS handler, you must give it the "root CA" certificate; giving it the server's certificate won't work.

Note that it's also possible that the last certificate seen in Wireshark won't be of a root CA, but only issued by one of the root CAs in your /etc/ssl/certs directory... If that's the case, be sure to set altsubject_match as well – using public CAs would be insecure otherwise, since 802.1X unfortunately does not know what "hostname" to verify against, the way e.g. HTTPS would.)

Not the answer you're looking for? Browse other questions tagged wifi wpa-supplicant wpa wpa2-eap wpa2 or ask your own question.