I'm running a tiny script to update and upgrade some Debian machines but since some weeks it always stopped due to some "news" the terminal is showing up. When manually upgrading I see a "fullscreen" (find screenshot below) from some software, which forces to press "q". I don't want to change any software so I'd like to find a solution, which allows to just skip every interactive screen, while upgrading.

Usually I was fine using:

After I realised that the upgrade process is interrupted without any timeout, I also tried to use the solution of this post:

but unfortunately with the same result. Does anybody have a solution to just upgrade a machine without any interruptions? 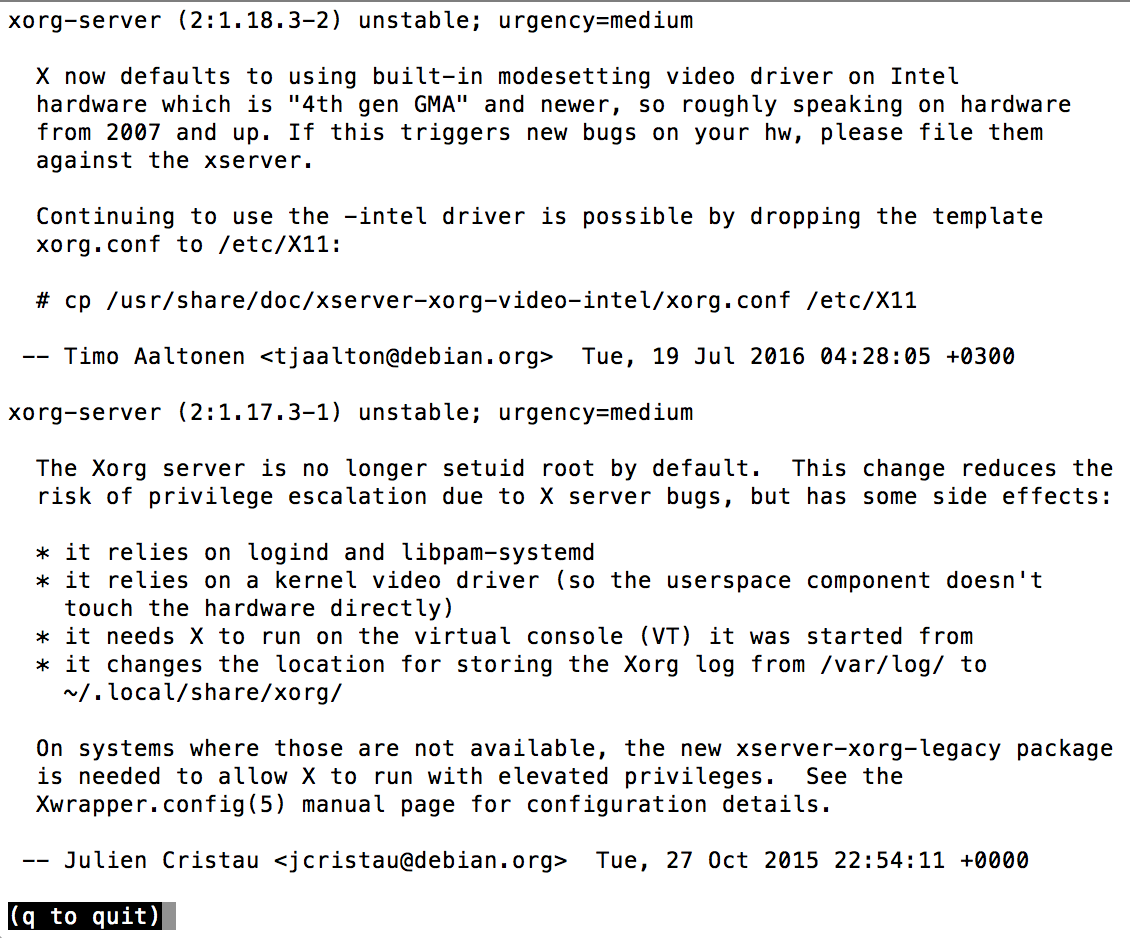 Secondary edited the /etc/dpkg/dpkg.cfg file to:

This did the trick regarding "press q to quit" - great!

I think it's also working to combine the commands executing:

I noticed (sorry if this is obvious for an advanced linux user) that bash acts different, when you execute a command via script than directly entering the command into the console.

All in all it was enough for my script solution to add the -yp parameter and set the DEBIAN_FRONTEND. In order to be safe, I'd edit the /etc/dpkg/dpkg.cfg file too.

you should set DEBIAN_FRONTEND=noninteractive, this will stop debconf prompts from appearing.

After that, add force-confold and force-confdef to your /etc/dpkg/dpkg.cfg file. then use the -y option

or use this command

and if it doesn't work try

The update information is given by apt-listchanges. If you never want to see these details, you can remove the package entirely. Otherwise, you can configure it using /etc/apt/listchanges.conf; in your case,

will avoid the installation being interrupted.

(apt-listchanges is supposed to do the right thing in these circumstances, so it should be possible to fix it in other ways so that it still shows update details in interactive mode. In particular you could try adding the -q option to apt-get.)

won't change anything, you need to ensure it ends up in the environment of the apt-get processes:

Not the answer you're looking for? Browse other questions tagged shell-script debian xorg upgrade raspbian or ask your own question.