I'm working on a Raspberry Pi project on a Zero board. I'd be so happy if I could write a sizable number of files from a Windows or MAC laptop onto the microSD card that I plug into my Pi project, and then my installation of Raspbian could read those files. I'm pretty unfamiliar with Linux and partitioning, but after some research, I came to the conclusion that a FAT32 partition was what I needed (I would prefer not to use my /boot partition as the common location). I took the following steps to make a large FAT32 partition on a fresh install of Raspbian:

When I read the microSD card on my Windows laptop, I only see the /boot filesystem, though I get a note that there is something wrong with the drive. When I click that notice, I'm given the option to scan. Windows notified me that it identified the errors, but I'm hesitant about allowing Windows to try to repair those errors.

Here are the results of sudo fdisk -l as well as an attempt to mount the filesystem with sudo mount /dev/mmcblock0p3 /mnt/storage: 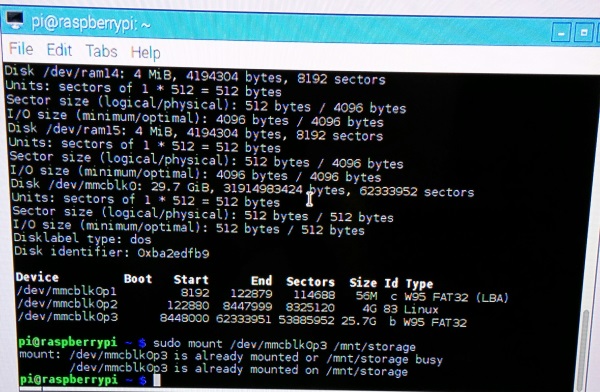 Instead of mkfs.msdos better use mkfs.vfat so the command would look like

where X would be the right number for your partition.

That should get the work done!

Not the answer you're looking for? Browse other questions tagged filesystems partition sd-card shared-partition or ask your own question.

2
Linux Mint not detecting microSD card
7
/dev/mmcblk0 partitions limit
1
Installing Debian 8 (Jessie) from HDD Partition
1
Paritioning a SD Card with both Linux and Fat32 partitions
1
Unable to partition/format a SD card with gdisk/mkfs, is there any other tool available to do so
2
can't mount partition - how can I troubleshoot it?
0
SD card: unable to read partition table