Today, I started having most web sites failing to load in browsers. Checking my network settings, I discovered those strange settings in ipv6 tab: 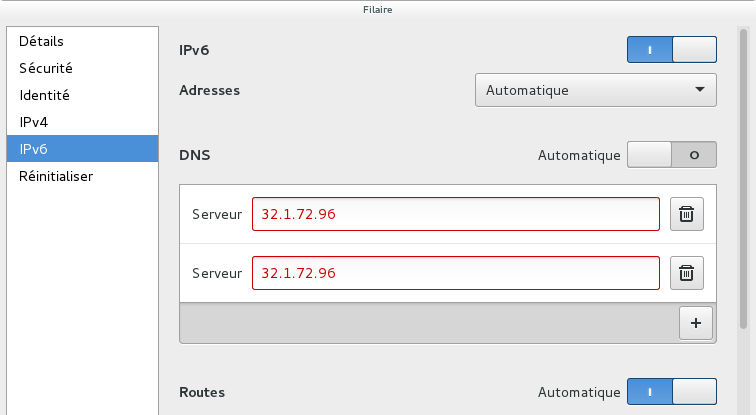 But just to make sure, I then reopened the network settings: the same strange ipv4 addresses in my ipv6 dns configuration were back! Networking still works for now, but I fear the trouble will come back on next reboot.

The ipv4 tab has its expected settings.

The /etc/resolv.conf file was pointing my isp own ipv6 dns server, I have removed them.

resolvconf package is not installed.

/etc/dhcp/dhclient.conf file does not contain any supersede.

Only the network configuration applet is wrong. I guess it is the network-manager-gnome interface. Its version on my system is 0.9.10.0-2 according to synaptic.
My distribution is a Debian Jessie, unattended updates activated (stable channel of course, it would not be a Jessie anymore otherwise, backports enabled), using gnome.

I search a bit randomly in my hidden home folders if some local settings were related to networking just in case, but found nothing, including in ~/.gconf/ folder.

What else should I check for that issue please?

Thanks sourcejedi,
So the bad display looks like a bug, ipv6 addresses being displayed here as ipv4, using only first four bytes of them. Maybe this is just a display bug. But redefining my settings as I have done would then have overwritten the actual cause of the trouble...
I have reboot now, things still works for now (with display bug still here). No clue what was the actual trouble.
(Emptying the resolv.conf as I have done was undone at the next boot by the way, it was refilled with my isp ipv6 dns.)

Checking the nmap version on my system, it is 6.47-3+deb8u2. But anyway, the old bug you found about it does not look related, just similar as you say.

I finally found a likely cause. I was having rdnssd installed. This packing has a know bug which causes it to override the dns settings...

I have removed it.

As already later stated in the question, the bad display was just a bad display, not the actual cause of the trouble.

Not the answer you're looking for? Browse other questions tagged debian dns gnome3 networkmanager ipv6 or ask your own question.

3
Why is my ISP DNS still in resolv.conf after a VPN connection and how can this be fixed?
2
Can not resolve names but can ping addresses when connected to IPV4 router, all works fine with IPV6 router
1
set DNS on ppp connection via systemd/dbus busctl
0
Network Manager DNS Issues
1
How do I fix IPv6 DNS server settings on Linux Mint 18.x?
0
How to add an IPv6 address?
1
Configuring Debian Buster (10) for IPv6 with DHCP
0
Change resolv.conf
0
Revert to default DNS /etc/resolv.conf settings on Debian