How to gather full network usage statistics on a freebsd router?

I have a freebsd box, which serves as a router from LAN to the outside world. It has several Internet providers, OpenVPN servers and clients, NAT and so on.

I would like to have complete statistics on when, who, to whom, via which provider, via which protocol, and how many bytes have been sent.

I agree that the minimal time scale will be an hour, i.e. no need for millisecond precision.

I tried vnstat2, ntopng and some other programs, but they don't seemed to have what I need or it is not obvious.

I don't understand, why this feature is not easily available. But I am not good in freebsd, so please, give me some clues.

For getting details of network transactions, you have got a implementation of a Netflow generator for FreeBSD or Linux:

As for NetFlow itself:

NetFlow is a network protocol developed by Cisco for collecting IP traffic information and monitoring network traffic. By analyzing flow data, a picture of network traffic flow and volume can be built.

For storing the Netflow data you also need what is know as a server collector. It can be either a Linux or a FreeBSD box. It should not be installed on the actual router. One such known implementation is nfsen

NfSen is a graphical web based front end for the nfdump netflow tools.

NfSen allows you to:
- Display your netflow data: Flows, Packets and Bytes using RRD (Round Robin Database).
- Easily navigate through the netflow data.
- Process the netflow data within the specified time span.
- Create history as well as continuous profiles.
- Set alerts, based on various conditions.
- Write your own plugins to process netflow data on a regular interval. 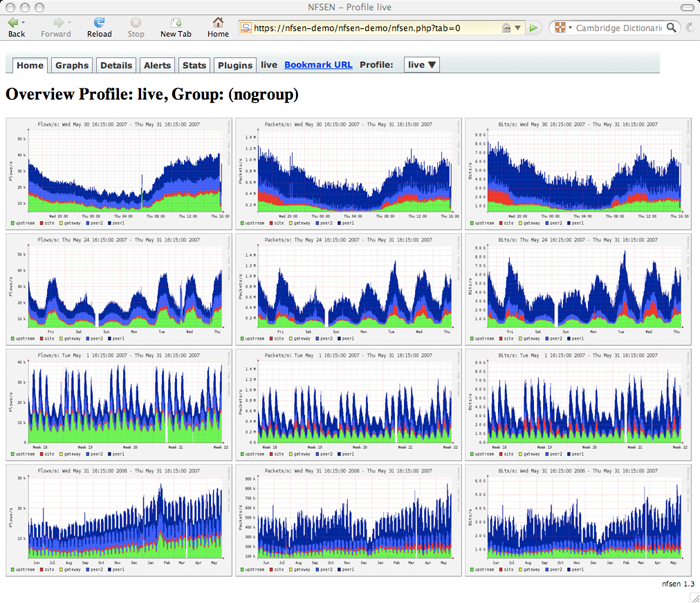 Be aware that, depending on your available bandwidth, generating NetFlows can be taxing on the CPU. A known strategy in some cases is doing a mirror of the switch port of the router, and using another machine for those operations.

After a certain threshold of bandwidth it probably makes more sense going for a professional router if generating NetFlows is a requirement.

As a final alert, having NAT, the NetFlows have to be captured in the inside/LAN interface, as otherwise you will lose the sense of whom is doing what.

I use up around 100GB of data for 5-6 months of traffic, using NfSen collecting NetFlow data from Cisco equipment, your mileage may vary.

Not the answer you're looking for? Browse other questions tagged freebsd routing statistics traffic nfsen or ask your own question.

13
How to gather byte occurrence statistics in binary file?
2
How to force FreeBSD to assign default router when acquiring IP in DHCP mode?
2
How to measure network traffic (with pfSense/freeBSD)?
1
FreeBSD memory usage shell script
1
Totally open FreeBSD router in VirtualBox
3
FreeBSD: How to update without network?