How would I deal with incompatible packages in APT when I need both of them?

So, I went to install G'MIC on my Kali Linux distribution and I needed to change out some packages in order to get it to work. I had to add Debian's repo in order to actually find the packages I needed to add. I thought it would be fine since Kali is Debian based. After all, the only thing that appeared to break was Blender and I fixed that by using the version from the website instead of APT like before.

Well, today I found out that I also ended up removing Gnome System settings (I was trying to add an images I made with G'MIC to my lockscreen). I guess I didn't see it when I looked at the list of removed packages. Now, I know I can just re-add the package, but that would result in G'MIC breaking again and I really like that plugin.

So, my question is, what would be the best way to handle this so I can still use G'MIC and restore my settings so I can use things such as the add to lockscreen feature of it again?

(The libopencv dependencies were what I had to change in the first place to install G'MIC and the gmic package in Kali only contains the demo program, not the full plugin I need.) 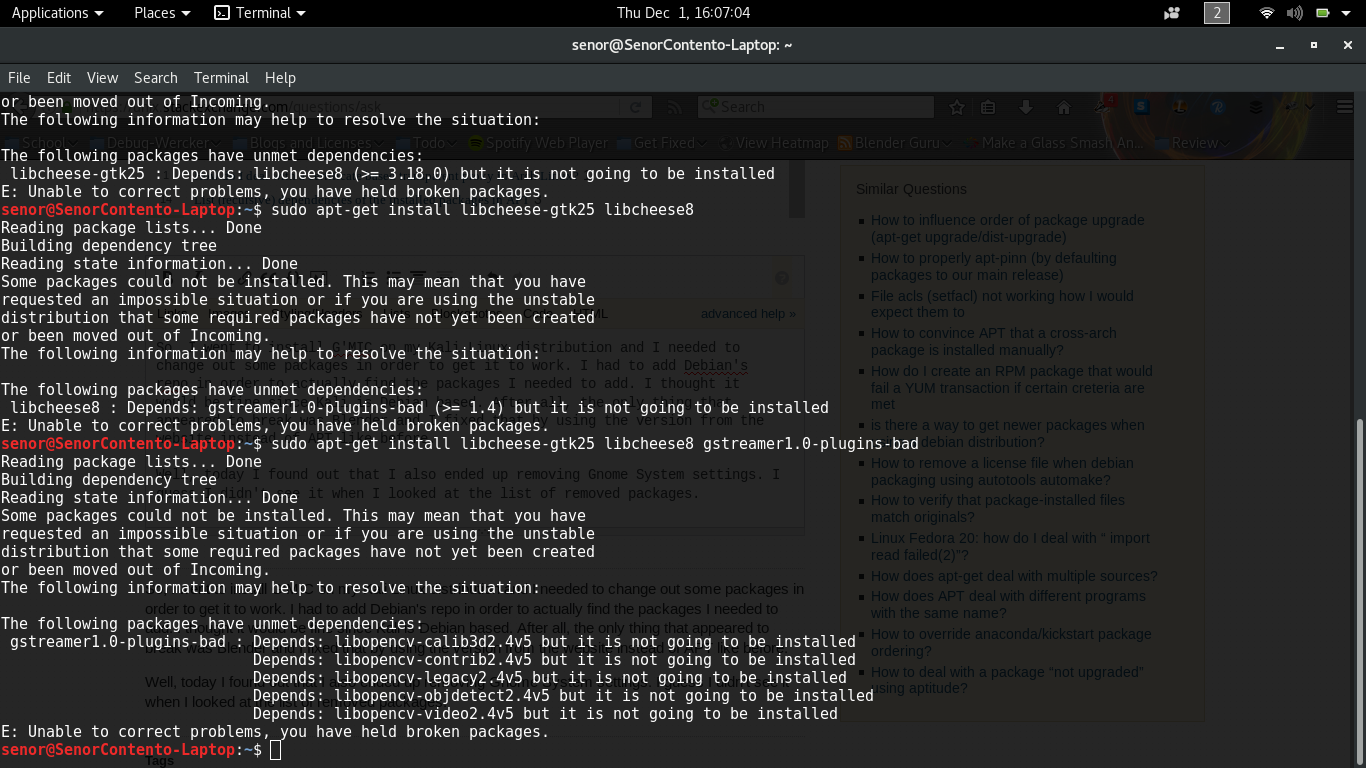 Edit: Given that some say that Kali was geared toward a narrow focus and that I shouldn't try to improve my system as a result of that fact, I am going to state that what it's geared for is not my concern as I am not dual booting just so I can use G'MIC. If I had some huge system I needed to work on that is vastly different, then I can just load it in a virtual machine, like how I do with Windows when I test the security from Kali. Okay, now I got that out of the way, the reason I am asking this question is to help with general purpose package management as I am sure I am not the only person who has had this problem.

Now, if there are no good ways to do it from APT, then we can try to see if there is a good way to "virtualize" the environment. What I mean is something like chroot, is there a good way to do that with G'MIC running as a Gimp plugin so I wouldn't have to deal with removed packages, or is there a better solution (besides dual booting).

Adding repositories to your software sources which have not been tested by the Kali Linux development team is a good way to cause problems on your system.

Kali Linux is designed with a very narrow focus. Even though it's based on Debian, you can't expect to add Debian repositories and pick and mix packages.

First off, I am going to say my solution is the chroot method. This isn't my favorite choice of solving this problem as what I really want is to be able to encapsulate the program by itself on the host system, not create a subsystem or dual boot or virtual machine.

The 3 commands below do 3 things. The first one installs schroot and debootstrap. They are both necessary to be able to run a chroot environment. There are ways to chroot without root, but I would have to do more research on that. The second one creates a chroot environment in /srv/chroot/jessie for Debian Jessie. I already had the script on my machine, if it turns out that some people don't have that, I may update this answer to create the script. The third command allows you to paste into gedit the below config so you can start the chroot environment. There are also text based editors such as vim and nano that others have explained how to use if a graphical application is not available.

This command allows you to see what your display number is, write it down or remember it (it usually is :0 unless you have a special setup)

Then you will want to tell your main system to actually allow connections to your graphics environment from your chrooted machine (on the same physical device). This wiki should help a little bit. Putting this command in your .profile or .bashrc will allow it to already be running when you need it.

So, to get G'MIC to work, I followed the instructions about mounting the hosts special devices inside chroot.

You will want to execute this on the host system, not the chroot system. Basically, this allows you to use the special devices of the host system (I have to do more research to see how secure this is, but since chroot itself is inherently insecure, you will probably need a better solution besides this for security instead).

Better yet, you will want to create a system service that can start these commands at boot. You can only run these once per boot or you will be locked out of your shell until reboot.

Run this to create the file, then paste the below contents into that file

Now, run these commands to set the correct permissions and enable and start the service.

This command is the one used to actually start the chroot environment.

Below is more specific to what you are trying to do inside the chroot environment. Basically your commands might change, but if you are also running Kali and trying to get G'MIC to cooperate while still keeping your Gnome Settings program, then follow exactly.

The reason you don't see me add gmic to the apt command is because turns out, that version also lacks the actual plugin I need, just like Kali's repos. So, I used my magic admin powers and copied the proper package from my desktop to chroots home folder.

Now granted, you may not be able to use your magic admin powers, or you just simply feel like wget is better. If so, do this instead (inside the Chroot environment):

Installing ca-certificates will not only install openssl, but it will also give wget the certificates it needs to establish a secure connection (as gmic uses Let's Encrypt, but wget didn't realize it was a valid cert until telling it). Also, wget just downloads the 64 bit version of G'MIC to whatever folder you are in (probably /root/).

When you go to install G'MIC in itself, APT may complain and say that you are missing dependencies and that you should run "apt-get -f install" to correct it. One of two things will happen when you do this, either one it will install the missing dependencies and then install G'MIC, or two it will remove G'MIC and let you use APT again for other packages. For me on Kali it removed packages (G'MIC), but on Debian it installed dependencies that G'MIC required before installing. If you install the missing packages manually, be warned that it may remove system packages if you tell it to (but only if you manually install the dependencies), as APT will do exactly what you tell it to do. Now, it will ask you if you want to remove packages, so you can run the command and cancel it if it asks to remove packages that you want to keep.

Now, libcanberra is one of those packages that isn't a hard requirement to get the plugin installed, but without it, G'MIC is only there for looks, it won't actually modify your image and will just silently crash with some output to the terminal.

Linking your chroot system with the host

Well, first I am going to say, linking it and making the link nice is a bit weird due to the fact that symlinking to the host system creates a broken link to a non-existent folder in the guest (or subsystem) system. Instead, I decided to create the folder in the guest system and link it to the host system. I just have to deal with file permissions since I don't want to make /root/ world readable.

That above will create at least one symlink to the host system. I want to create one in chroot's /root/ and one on my desktop.

Now, you may notice that the permissions are not right since you are running as root in the chroot system and as whatever in the host. Thanks to ACL I can set permissions automatically for any future created files (not ones already created). Do inside chroot.

If you want to set all files recursively that were already created... Do inside chroot.

Well, first, to make exporting the environment variable easier, you can just run the below commands in chroot.

To run the script without need for a password, type this command and type the line with %sudo into the file.

Now you can type the below command without the need for a password (providing you are part of the group, sudo).

Alacarte (or some other Menu Manager)

Decided to use sudoers instead of setuid because of automatic path setting and other security enhancements. Obviously this is still insecure to run root without password (even for a single command) and I would like to be able to run rootless, I just haven't figured out how yet.

You install alacarte if you do not already have a menu manager and depending on what manager you use, there are different ways to operate the gui. You run the below command on the host system to install alacarte.

Now, you use the Gui to paste the below command into the command portion of alacarte when you create a menu item and save it. You may have to logout/login or reboot for changes to take effect if you are modifying (or deleting) an existing entry.

I left some images on Imgur to show alacarte and the app menu.

Well, there you have it, a way to load Gimp with G'MIC onto Kali Linux. Have Fun!!!

Now, minor caveats to this solution is, the lack of a window manager makes Gimp look ugly compared to the one on Kali, this is a bit complicated just for a simple setup for an art plugin, and this can't just work like how I could just download the program and expect it to work.

Some advantages to this are, I don't have to dual boot for a plugin (especially since I use Kali for pen-testing purposes) and I don't waste resources running a full fledged virtual machine.

Not the answer you're looking for? Browse other questions tagged apt software-installation kali-linux or ask your own question.

292
How to set default file permissions for all folders/files in a directory?
103
What is this folder /run/user/1000?

4
Finding all “essential” packages with apt
3
Naming conventions / translation between dpkg and apt packages?
1
How to restore packages removed by installing a program
12
Install recommended packages of an already installed package with apt
1
debian unstable and apt upgrade policies with installed experimental packages
0
Does the repositories defined at sources.list limit what packages you get with APT?