Borders of external monitor constrained to "outside" of laptop monitor

I have experienced this problem on elementary OS Loki (which is based on Ubuntu 16.04 LTS), and I traced back a partial solution to Ubuntu 11.04 so I think this is definitely a sort of persistent Ubuntu issue, and as we know Linux Mint is very closely related to Ubuntu.

So basically, I use an external monitor which I position to be above my laptop screen, and of course naturally I make it so that when I move my mouse to the upper boundary of my laptop's built-in display, it will enter the external monitor. This external monitor is connected via a DVI cable which is then connected to a DisplayPort converter so that I can use it with my laptop.

The external screen is a large 16:10 widescreen monitor and my laptop is a humble 16:9 and much small length-wise so the monitor's real estate is wide enough to the point where I can position my laptop in the middle and there is room on either side of the screen for the external monitor.

Here is an illustration in GIMP because FOSS is great. :) 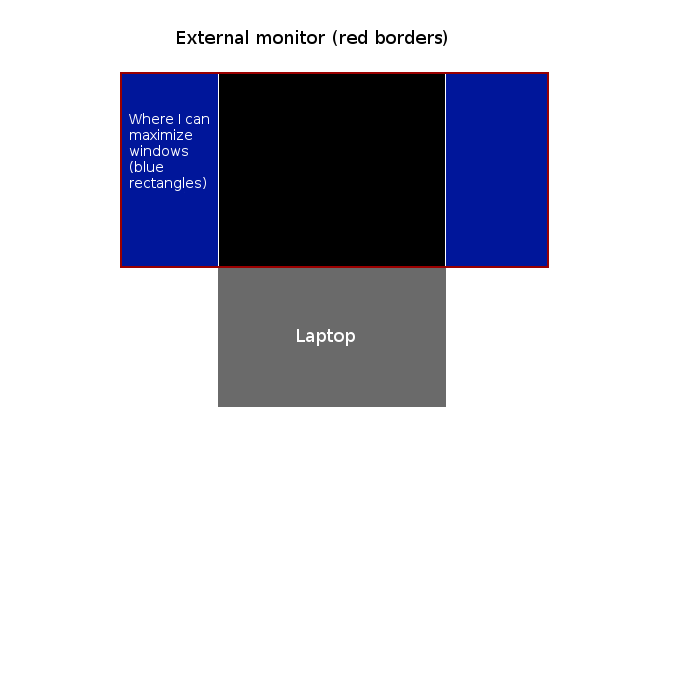 So basically, if I drag a window to anywhere inside of the red rectangle and hit maximize, it's going to fill up either blue space, rather than the entire red rectangle.

To alleviate this problem you can set the larger display as the primary monitor, but I do not want to do this because it will move my panels and my dock onto that screen which is less accessible to me (the external monitor is my "output" screen and my laptop is my "input" screen so I try to keep my mouse on my laptop screen as much as possible while I look at something on the external monitor.

Alternatively I can move the laptop's display to the left or the right (not above or I will get the same problem). This is also not an adequate fix for me but I mention it in case someone else gets the same problem. You can also drag the borders of the windows on the external monitor to populate the black space in the illustration but this is less than ideal.

I want to either somehow fix this bug, or someone tell me how to duplicate my GNOME panels AND my Docky onto my built-in display while the external monitor is labeled my "main" display.

Changing from DisplayPort to VGA did not resolve the problem.

Somehow I didn't actually have this issue on a relatively fresh install of Mint at first, but I was not using Docky then, only the GNOME panels. (eOS comes out of the box with Plank which is similar to Docky). Disabling Docky and enabling only GNOME panels did not resolve the problem.

Not the answer you're looking for? Browse other questions tagged display monitors multi-monitor displayport or ask your own question.