I have full Linux installed on my flash drive. What I want to do is boot from this flash drive with the Asus C300 Chromebook.

So my question is, how to go to multiboot on chromebook, something like pressing F12 on my laptop?

I'm curious if it is necessary to such simple task as booting from flash drive.

Such a simple task can be very complex. It assumes that all components are in place on a certain platform, but Chrome devices are no traditional BIOS/UEFI computers and some don't even have a x86 processor.

The Chrome OS developers had a different goal in mind than to make another general purpose computer like the popular "Wintel" systems. They got rid of every step in the traditional boot sequence to make Chrome OS boot fast even on low powered machines. 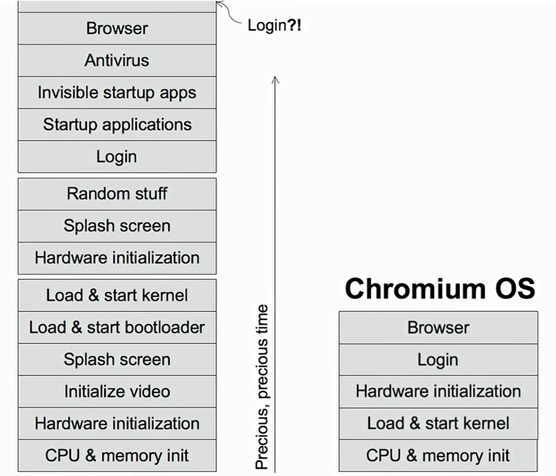 So even if you have an Intel processor in your device there should be no firmware code active to detect external storage and attempt to boot from it (you have to enable it in developer mode, as well as to boot from unsigned media). The default for Chrome OS devices is that there is a recovery system with basic functionality to deploy system updates, here is an example statement:

Partition resizing is initiated by the system, not by the user.

Everything else is supposed to trigger the warning message for the user that her/his device has been tampered with. Which is good from my point of view.

Since this question has been posted the traditional Windows platform (Windows on Intel processors = Wintel) switched from legacy BIOS firmware to UEFI, which doesn't make it easier when you say I installed Linux (for x86/x64) on a flash drive, because there are two different ways you can possibly boot these systems now. It doesn't stop there because chrome devices use different methods for booting as described in the developer documents.

Some users in the community like MrChromebox/MattDevo provide custom firmwares which allow to boot other operating systems or external media (depending on the configuration you would have to press Ctrl+U) on recent x86 Chrome devices.

Not the answer you're looking for? Browse other questions tagged boot chrome-book chrome-os or ask your own question.

11
Which Bootloader is Used on a Chromebook?

1
How to use USB flash drive as part of filesystem for Chromebook running Linux?
0
Help Installing Linux on Chromebook C720
0
Boot Linux from USB on Acer CB5-311 Chromebook 13
0
how to boot when boot files are lost
0
Using Ubuntu 18.04 LTS on Chromebook with crouton
0
Minimal bash grub after installing on external SSD with live USB
0
Cannot boot live into linux from USB on Asus ROG laptop