How can 'man' render double quotes not as doubled backtick and prime characters?

When I do a command such as:

I see quotes shown as:

There have been posts about why this happens:

But, I haven't found a way to force man or the underlying pager to either show an ASCII double quote (") or to embolden the characters, or anything other than using the backtick/prime characters.

My use case is that I want to be able to search the bash man page for single quotes or backticks for where they have semantic value and the clutter of non-semantic backtick/prime characters makes this difficult.

I have tried changing LC_ALL from en_us.UTF-8 to C, and have tried using man's option -P to specify other pagers/options, but I have not yet found a solution.

My preference would be to discover a solution that causes man to render double quotes either as the ASCII double-quote character (") or to render the quoted content as formatted text (for example, by underlining or emboldening it).

The backticks in the bash man page are explicitly given in the troff source, not the result of some macro, so are hard to change. However, the special single backticks are quoted \`, so you could apply your sed to the source troff instead using this difference.

Instead you can add a troff command to translate the backtick into some other character. The command .tr AXBY translates all A's into X and B's into Y. So

translates backtick and single quote into double quotes. That leaves you with just the wanted special single backticks in the output, though you also have artifacts like the pipeline"s return.

On the whole, I think your "poor workaround" is quite adequate.

It might not be a pleasant option, but you can use w3m as the browser for man's HTML output: 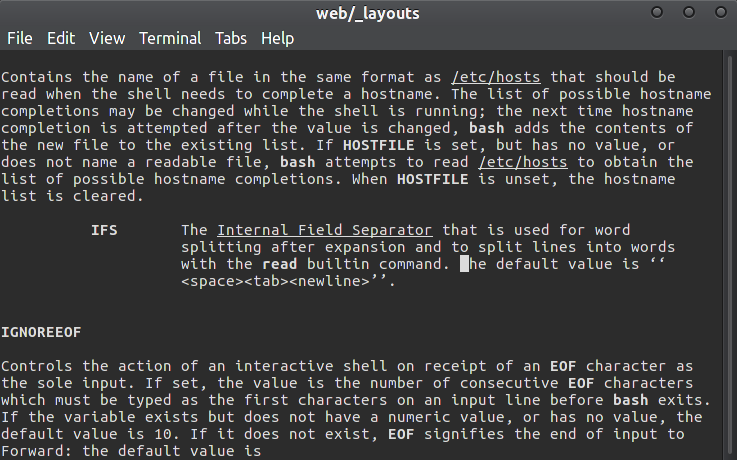 It renders ``…'' using Unicode quotes (as does Google Chrome, but for some reason, lynx doesn't).

Agreeing with @meuh that the quotes are embedded in the troff (manual page) sources, whether it is hard to change is debatable. That mostly depends on the developer of the given documentation. bash uses that convention to work with the related toolset, e.g., makeinfo.

For instance, xterm's manual page uses macros to get an (arguably) better appearance:

and used, for example

and producing this (cut/paste from xterm to preserve the alternate quotes):

Although both windows may be displayed at the same time, one of them is considered the “active” window for receiving keyboard input and terminal output. This is the window that contains the text cursor. The active window can be chosen through escape sequences, the VT Options menu in the VTxxx window, and the Tek Options menu in the 4014 window.

A screenshot shows it better:

The result in PDF uses different quotes due to the condition in the macro:

So a possible improvement would be to modify the preprocessor to add the macro definitions and substitute groff's named characters rather than literal single- and double-quotes. Since neither produces ASCII by default, there would be less syntactic clutter in the result.

Not the answer you're looking for? Browse other questions tagged man less roff or ask your own question.

38
Why do Unix man pages use double backticks in place of double quotes?
8
Man page quotation characters
3
Why some strings are quoted with double backticks and double single quotes in man pages?
1
man -t converts - to −

27
How can I use man without less?
38
Why do Unix man pages use double backticks in place of double quotes?
3
How can I track changes in man pages?
7
man page search - how can I turn off the highlighting after matches found?
4
What is the LESS environment variable to man and how is it set up?
0
How to use terminfo to set colors for man and less?
2
How to display cat (not man) pages?
0
non-printable characters in man pages and logs
2
How can I access a man page that is masked by another man page?